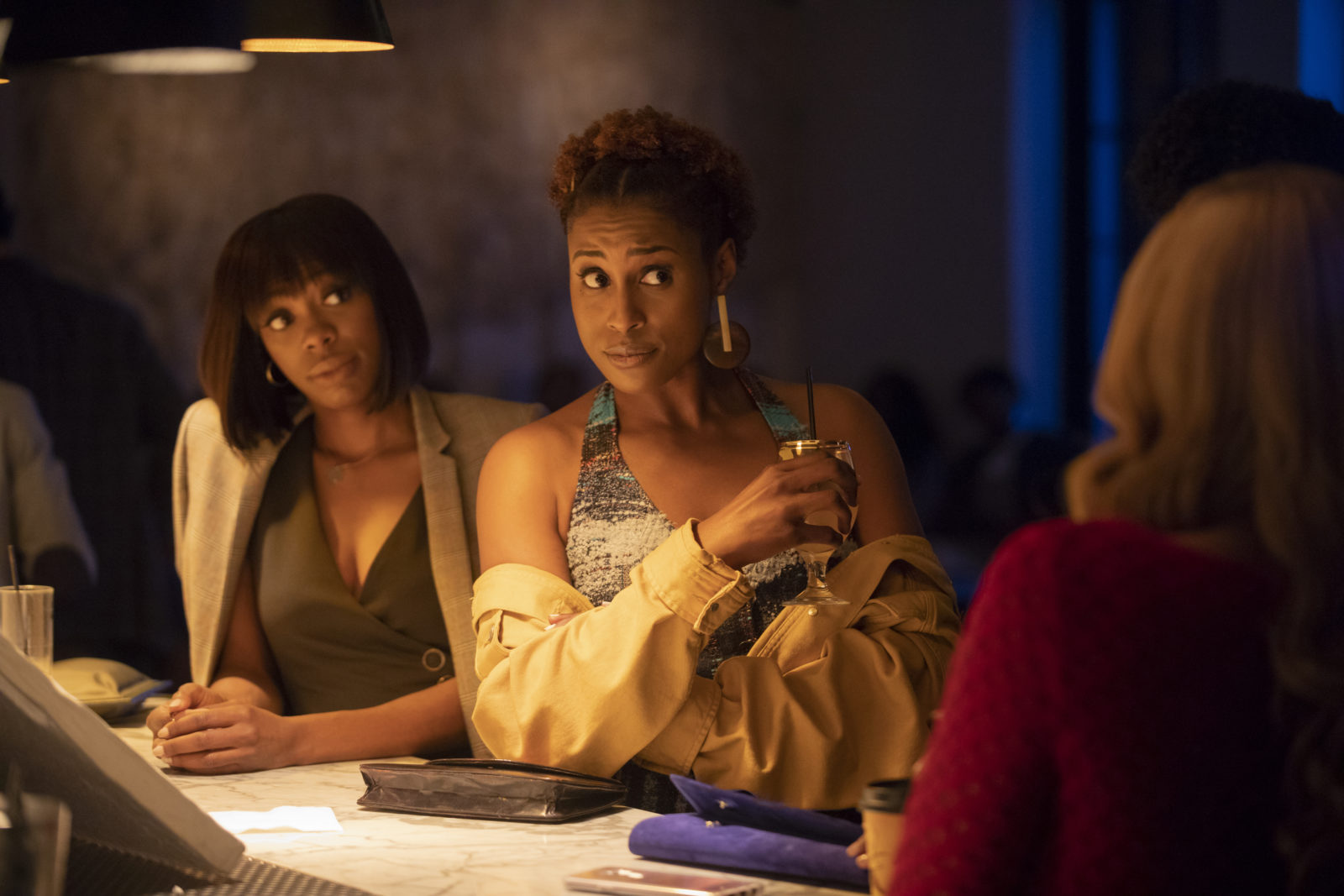 Oh HBO’s Insecure how I love thee? Let me count the ways!

Here we are for another recap of the adventures of Issa, Daniel and Molly’s “whatever-like” life. Let’s dig into what happened on this episode of Insecure! This show just keeps getting better and better!

We open up to Daniel and Issa in bed together.  No, they haven’t quite hit it yet but it looks like their “platonic relationship” (and I am literally using air quotes as I type this) allowed them to be comfortable enough with one another to share a mattress.

After Daniel asks Issa, “what does the heart want”? She imagines Daniel engaging in some cunning linguistics with her.  After Daniel repeats it again, we see that Issa is just daydreaming and clearly is thinking of Daniel as more than just a friend. 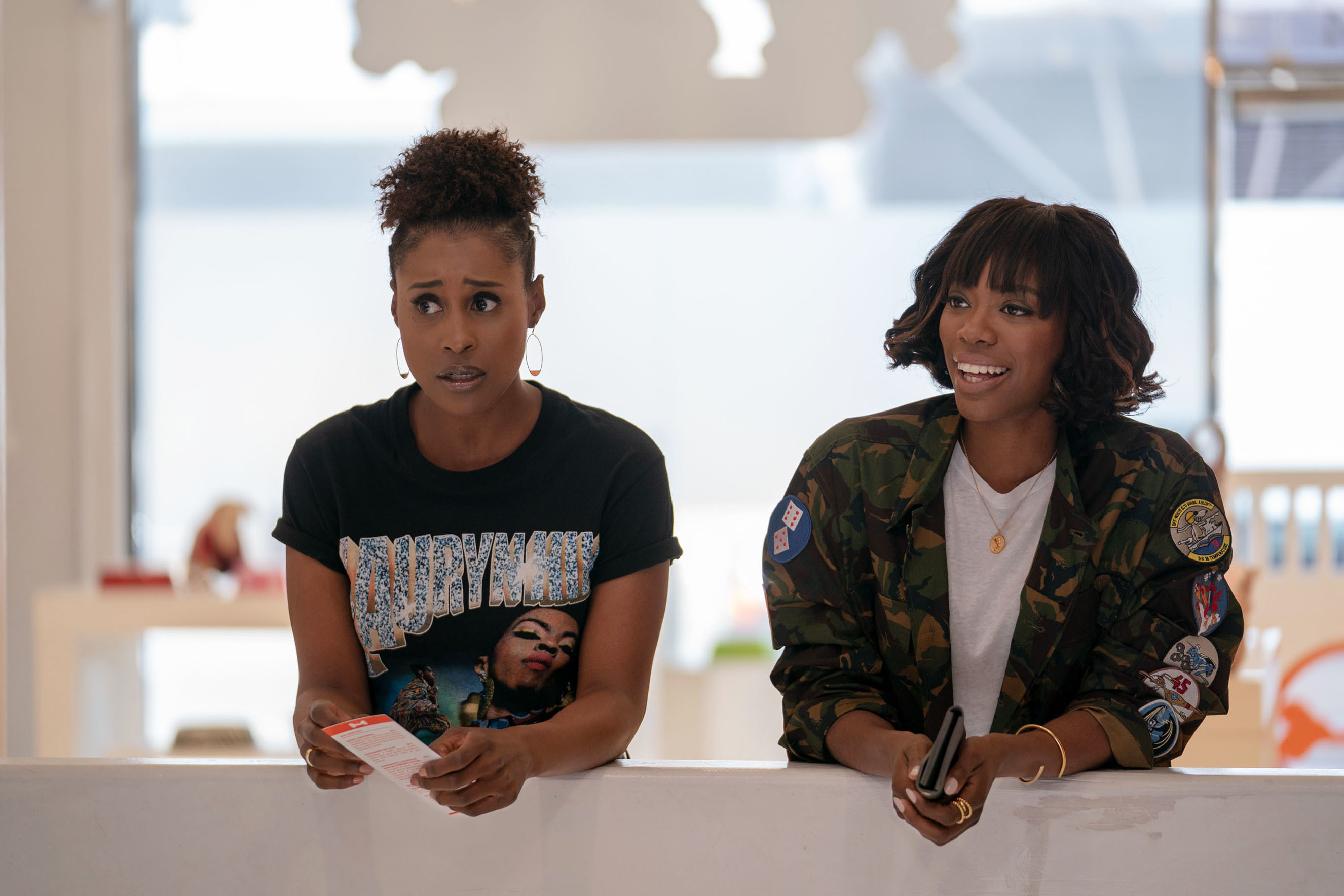 Molly is later with Issa waiting for her doggie to get a blueberry facial and a paw massage.  Molly is so L.A. I can’t stand it! Molly thinks her dog needs it since there could be some separation anxiety when Molly starts her new job at an all-Black firm. Issa then reveals to Molly that she kind of likes staying with Daniel and the two are sleeping in the same bed. And of course, Molly disapproves.

Issa and Frieda attend a job fair and feature a display with all of the staff of We Got Y’all. The team is seeking more diversity and want to add in more folks of color to the group.

Molly starts her first day at her new law firm and immediately is comfortable with her new colleagues and jokingly says they all look like they’re in a McDonald’s commercial.

Daniel is at Khalil’s place and they listen to his beats. After Daniel plays his melody, Khalil critiques it a bit more harshly than Daniel would like and changes the upbeat.  This isn’t something Daniel is feelin at all. It’s bad enough he’s feeling pretty insecure about his music as it is.

Back at the job fair, the team from We Got Y’all is doing well with inquiries. Issa meanders away from the table with Frieda and sees young kids dancing from a non-profit called The Beat Crew. They work with musically-gifted youth. This piques Issa’s interest right away. 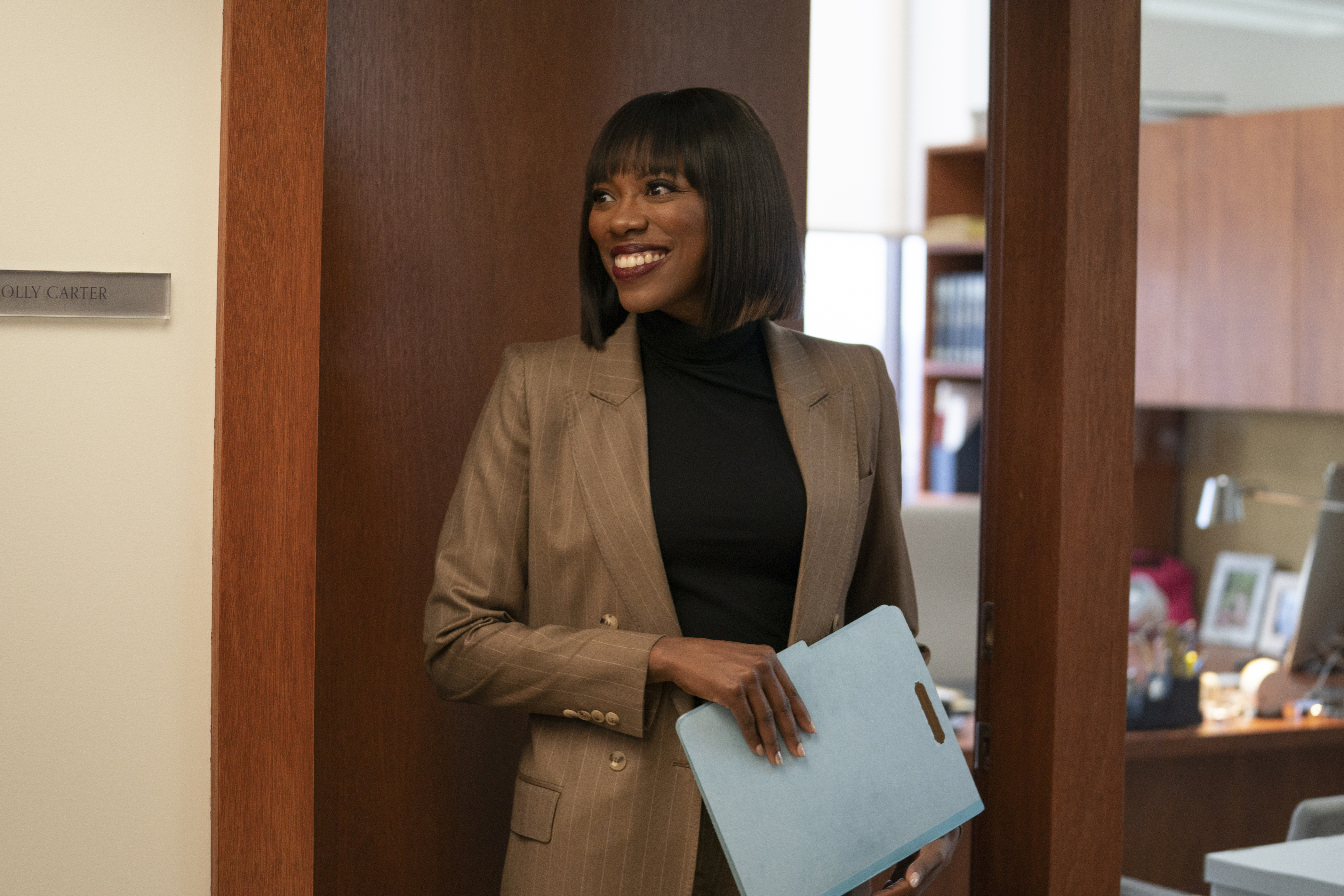 Back at Molly’s first day at her law firm set in Wakanda, she chats with Karen who informs her the firm doesn’t use DocuSign and they use a carrier to send and receive documents — which is pretty archaic for Molly’s tastes.

Issa finally gets accepted into her job search and gets a gig working as a super in an apartment complex, where her rent will be reduced to $750 per month.  This will give her exactly what she needs to be able to afford to move out and live on her own.

Daniel and Issa chat at the laundromat and she tells him about her new job opportunity.  Daniel thinks she’s adding a lot more to her plate and she doesn’t have to feel pressured to move out right away.  He admits to her that he enjoys her company. 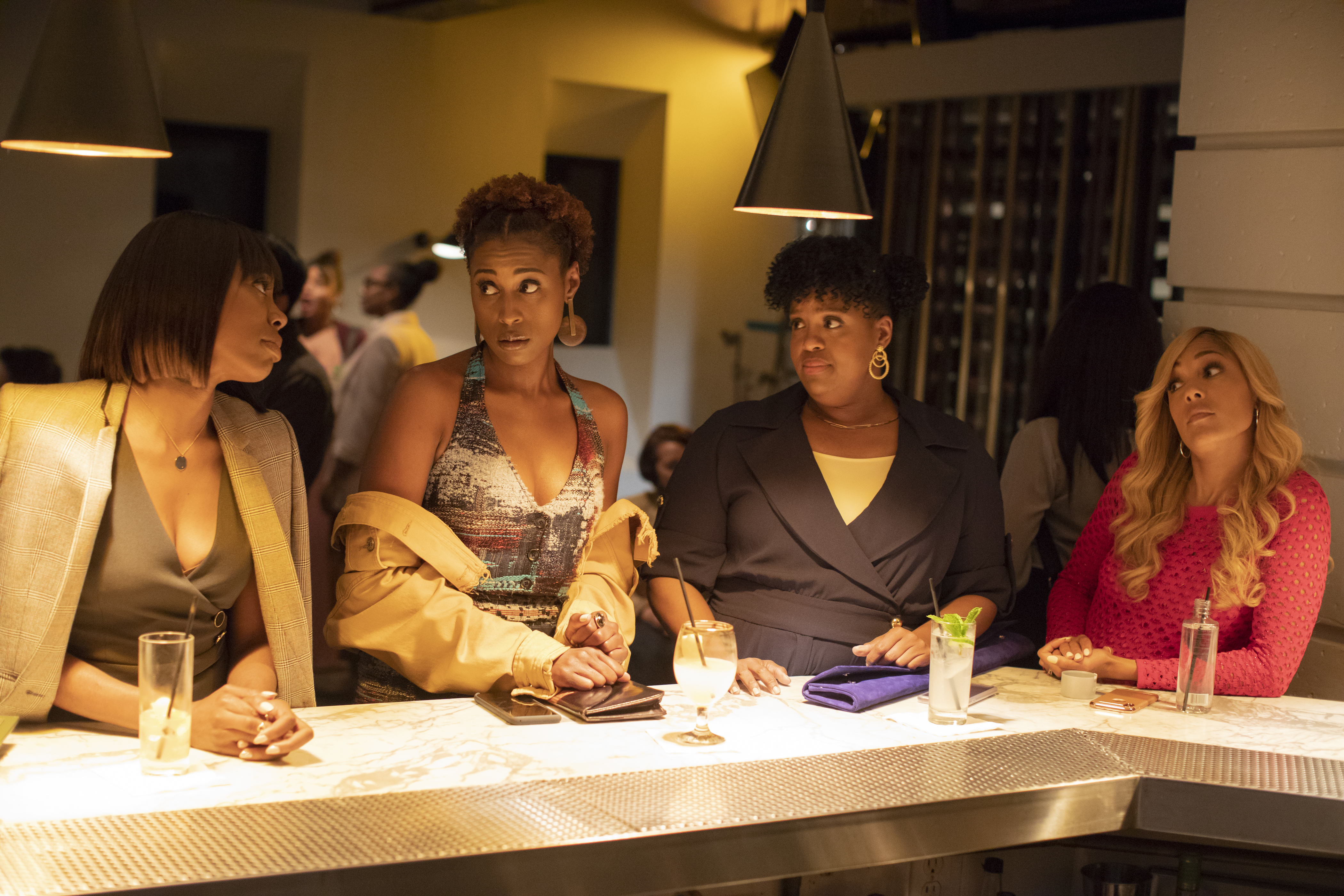 Molly is a little perturbed by the fact that there is no off-site storage facility for the practice and her office is the storage facility. She vents about it more to the girls — Issa, Kelli, and Tiffany about how this firm needs to step it up like the white firms she’s used to.

Issa starts perusing The Beat Crew website during work hours and it’s clear she’s becoming more interested in them than in We Got Y’all.

Daniel plays his melody for Spider in the recording studio.  As Spider listens to it and appears to like it, Khalil jumps in and sabotages Daniel by playing his version. When Spider is indecisive about which beat he likes better, Khalil presents him with a completely different melody for Spider to check out. Checkmate. 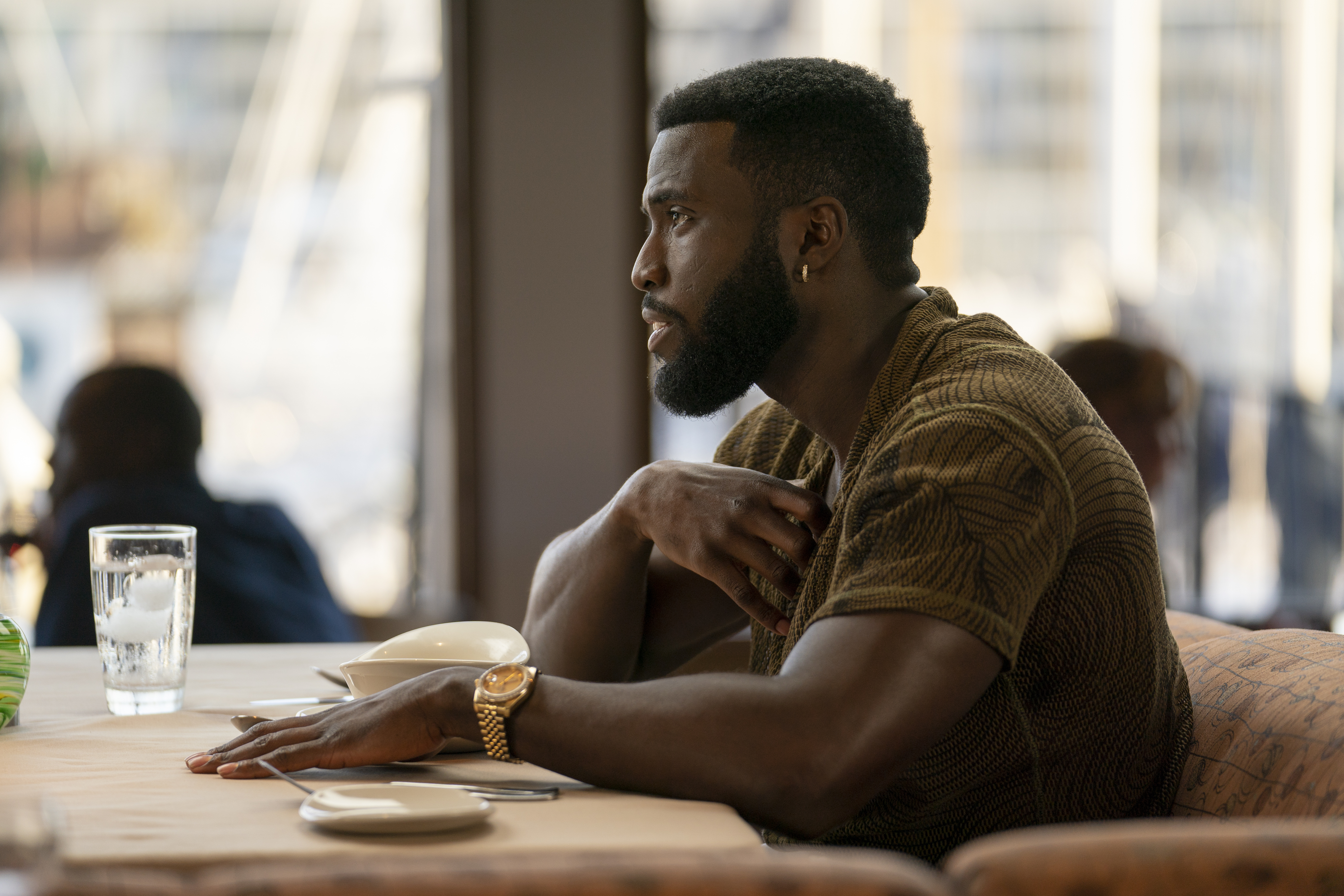 Daniel and Issa have lunch and we have another moment where these two open up about their problems.  However, Daniel who is now pretty bitter over what just happened, and explicitly tells Issa in misdirected anger that “it’s funny” that she’s giving him career advice and that she constantly needs saving. This obviously hurts Issa’s feelings.

While in bed Daniel apologizes to Issa about how he was acting and blamed it on the Khalil situation. He embraces and kisses Issa. The imagined daydream Issa had earlier now plays out for real and it looks like these two are going to do the deed. However, Issa stops in the middle of Daniel’s cunning linguistics play and finally realizes what the two of them are doing is just not working. This doesn’t feel right to Issa and Daniel agrees.

Looks like it’s getting even more complicated for these two.