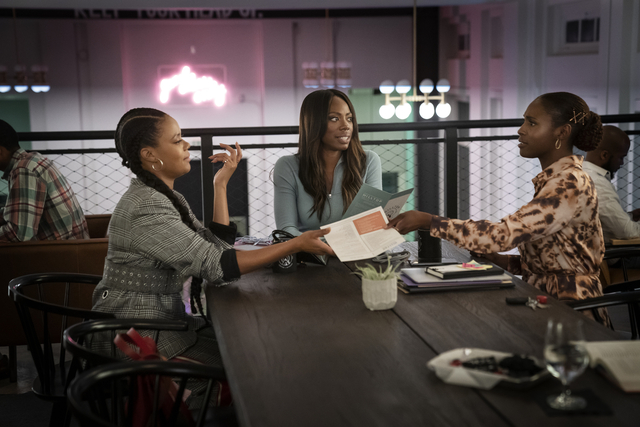 Welcome back to week two of Season 4 of HBO’s Insecure.

This week we return with a flashback to three months before the block party. Issa (Issa Rae) and Condola (Christina Elmore) are together planning staging and catering for the event. Lawrence’s name comes up, and it gets awkward between the two women. At this moment both Issa and Condola decide to squash it and make Lawrence (Jay Ellis) a non-issue between them.

Issa, Kelli (Natasha Rothwell), Molly (Yvonne Orji), and Tiffany (Amanda Seales) are dressed for Halloween and have one of their legendary ensemble scenes where they gather together and talk about who is screwing who as well as some long-awaited girl therapy. Molly brings up Andrew (Alexander Hodge) who has an issue with opening up to Molly. Any fan of Insecure watching this show is probably laughing at Molly in irony and holding a Season 1 version of her to her face. Molly is definitely the pot calling the kettle black here, asking for Andrew to open up to someone who herself has been notoriously known to build a wall between her own emotions and private history in relationships. But I digress. It appears Molly this season is getting of a dose of her own medicine.

Issa is getting a little messy with TSA bae. Even though the sex is good, he realizes the condom slipped off during post-coital bliss. Issa runs to the bathroom, lectures herself, and has a moment of clarity. It’s time to get yourself together, girl. Immediately thereafter the condom slips out of her vajayjay.

Lawrence meets with his boys and has a pep talk about Issa. They err on the side of being upfront with Issa about Condola even though both agree the relationship with Condola is the equivalent of shi**ing where you eat.

And here is where the conflict arc begins between Issa, Condola, and Molly.

Molly meets with Issa for lunch while Issa is finishing up a work appointment with Condola.  Condola mentions she is hungry and is ready to leave; in response, Issa invites her to join her and Molly for lunch. This, of course, does not impress Molly in the least. When Condola steps away for a moment, Molly quickly tells Issa she isn’t comfortable with Condola joining them for lunch. We now know for certain that Molly isn’t having it with Condola being the third wheel in their relationship, and this is the beginning of the fracture between Issa and Molly.

Lawrence meets with Issa in front of her apartment building and decides to be frank with her about Condola. He politely asks her not to have his name brought up in their conversations and just wants to keep things neutral between all of them. Issa agrees.

Andrew meets with Molly at her apartment to have dinner and she begins to press him for information about his sister. He pivots and tries to change the subject, offering to go out to a show. This leads to a disagreement where Molly tells him she wants to “date a guy with depth.” Andrew immediately leaves her apartment.

The episode beautifully bookends with Molly’s conflict at work with one of her co-workers.  As it turns out, Molly wasn’t proud of the way she handled one of the cases with her partner. Her partner had to confront her to get this information out of Molly, but she was open and honest with her feelings about her conduct on the case. This scene shows some growth from Molly and how she has evolved since the previous seasons. However, the same honesty and transparency she is asking of Andrew she is still struggling herself to show in her job.

The final scene between Issa and Molly amplifies Molly’s inner conflict, which is what she will likely be battling this entire season. As Molly receives a call from Andrew, he apologizes and explains that he should have been more forthcoming about his family and personal life to Molly. This gives Molly confidence that maybe this relationship with Andrew is worth saving. However, when Issa asks Molly who called her, Molly fibs and says it was a work-related call. This was after a lecture Issa gives Molly about how she always is seeking a problem in a relationship.

Molly keeping secrets from her bestie is not the path you want to take if you are preaching transparency to others. But we shall see what happens next. Oh, Molly.

Props to writer and executive producer Amy Aniobi for writing a solid episode.