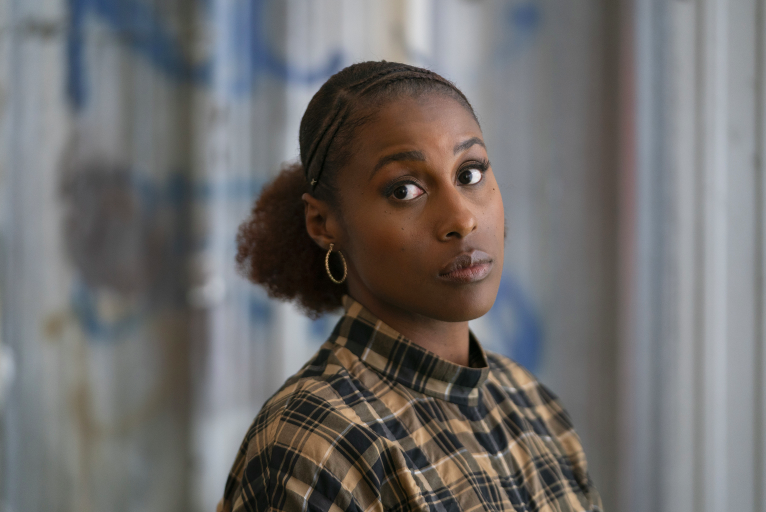 After all of the yelling and heartbreak in the last installment of Insecure, episode 6 titled “Lowkey Done,” opens with Issa (Issa Rae) in her own head.

She is replaying all the hurtful but slightly true things Molly (Yvonne Orji) screamed in her face the night before at the Block Party. Words like “selfish” and “stop using people” echo in her mind. Tired of reflecting, Issa sits up and checks her phone to see what people are saying about her event and if anyone got freaked out by the stampede Molly unintentionally started with her fight.

Instead, Issa sees that the majority of the comments are surprisingly positive. Eventgoers praise the Block Party for everything from the tacos to Vince Staples to Inglewood as a location. In fact, the only negative comment comes from Shannon (Dayna Dooley), the fake journalist with the newly created YouTube channel. Issa rolls her eyes and switches gears to listen to her voicemail messages. The first call is from her brother Ahmal (Jean Elie), who tells her to shake off Molly’s negativity and focus on how well her Block Party turned out. The second message comes from her event assistant Sequoia (Courtney Taylor), who says four vendors have requested deposit returns – because of the fight probably – and she has a few questions. Issa stops listening and skips to the final message. It’s Kelli (Natasha Rothwell), and she has Tiffany (Amanda Seales) and Derek’s (Wade Allain-Marcus) crying baby in her arms. She wants to know why things got so out of hand between Issa and Molly. Frustrated, Issa hangs up and closes her eyes as Kari Faux’s “Leave Me Alone” starts to play. Sigh. Looks like it’s time for Issa to face the music and talk to Molly, but when?

That’s just the intro. The next scene finds Issa in the mirror brushing her teeth. “So what am I supposed to do now?” Issa asks her reflection. The mirror image tells Issa that she “f*cked up.” She argues with the mirror and concludes that she should probably reach out to Molly. The mirror tells her that she’s always the one who reaches out and apologizes. Really, mirror? Are you sure that’s accurate? But Issa seems to agree. “Let her reach out to you. She’s wrong too,” the mirror says before the mirror urges Issa to relax and take care of herself. So that’s what Issa does. She cleans up her place including her grody fridge. Who has time to clean when you’re planning a whole Block Party? As she peruses a stack of mail, Issa’s phone rings and it’s Nathan (Kendrick Sampson). He’s checking on Issa to make sure she’s ok. Issa apologizes to Nathan for dragging him into her row with Molly but Nathan tells her he’s fine. He says that Issa should still be proud of the way her event turned out. Issa – who is clearly processing what Molly said still – apologizes to Nathan if it seemed like she used him in any way. Nathan says Issa needed help and he wanted to help her. Before they can dig deeper, Nathan has to go. He has another client’s hair to cut but tells Issa to call him later.

Cut away and Issa is inside the grocery store standing in line. A pregnant woman can be seen and heard behind her asking if anyone can help her with her groceries. Issa thinks better of it but then decides to help the stranger in some Karmic gesture to prove wrong Molly and the Universe. But the gesture falls short when Issa’s credit card is unable to cover her purchase and the lady’s so no deal. The pregnant stranger thanks Issa and says Issa’s inability to help her puts her woes in perspective. Slightly embarrassed, Issa pushes on, pays for her wine and leaves. Out on the street, she sees an elderly man running after a bus, which he unfortunately misses.

Again, determined to prove something to herself, Molly and the Universe, Issa decides to help the man and offers him a ride if he’s going north. The man, whose name is George (played by wonderful character actor Brent Jennings), warns Issa not to try anything shady and takes up her offer and gets in the car. What happens next is nothing short of comedy genius as George complains about everything from the temperature in the car to feminazis and everything in between. He even shares a timely parable about losing touch with his friends. Then George says he has to pee, and Issa is forced to pull into a mini-mall parking lot so good old George – and his overuse of the word “N*gga” – can be excused to run in a nearby laundromat. Issa’s mirror reflection tells her to drive away, but Issa is determined to help George and so she does. When George gets back in the car, she drops him off at his destination and hauls it over to a Paint ‘n Sip for which she’s running late.

When Issa gets there, there is one open seat and she ends up sitting with three women from Maryland who are celebrating their friend Dina’s (the still stunning Kyla Pratt) wedding shower. Issa shares her jug of Pinot with the ladies and they tell stories about their friendship and missteps over the years. Afterward, the women who are vibing with Issa and vice verse, invite Issa to come and join them at the bar on the corner as she ignores Kelli’s calls and voicemails. Dina shares some lame proposal story and Issa tells the crew about her job as a cultural curator. The women praise Issa for her cool job and then she finally feels good about her professional gamble. Issa heads to the bathroom with one of the friends, Kindsey, and they’re laughing and talking about men in the area. And then Issa realizes Kindsey is gone.

She comes out of the bathroom stall and doesn’t see Kindsey there either. Issa goes back to the table and suddenly it’s clear the women have dined and dashed. Making matters worse, Issa finds a score sheet that reveals that not only have the women left her with the bill, but they did so for “points” as if it were a little game. Issa pays and runs to her car to find the underhanded heifers and sees them walking down the street. She jumps out and smashes a painting over Kindsey’s head and screams, “Welcome to LA!” Yay, Issa! Get your revenge! But sadly, it is all in Issa’s head. She sees them slinking down the street and decides to take the loss. Poor Issa. Instead of running them over with her car or at least pretending to – which is also an option since she’s in her car – Issa instead takes out her phone and calls someone. Is it Molly? Nope. It’s Issa’s mom (the incomparable Wendy Raquel Robinson), who is peeved that Issa didn’t invite her to her Block Party.

After Issa explains to her mom that the only reason she didn’t invite her is because her mom doesn’t like crowds of black people, the two laugh. But Issa’s mom can tell something is wrong. She opens her arms for Issa to come and give her a hug and at first Issa resists. But then she hugs her mom and the tears start to flow. Issa tells her mom about her fight with Molly and her mom says that it’s just a season that will pass. “Is it Fall? Because it hurts,” Issa says. The two then switch gears and talk about Issa’s professional pursuits. Issa thinks her mom sees her as a flake. But it turns out that Issa’s mom admires her skillset and flexibility. “You admire me?” Issa asks her mom in awe. And it turns out, she does and that’s just what Issa needed to hear most. So, it wasn’t just Molly in Issa’s head making her imposter’s syndrome fears flare up. It was her mom too. But her mom is actually proud of her.

Issa leaves her mom’s place and Kelli calls her again. This time, Issa answers and Kelli wants to know if Issa has reached out to Molly. She hasn’t, of course, so Kelli warns Issa that the best thing for the two of them would be to meet in person and address what went wrong so that they can fix it. Kelli divulges that when she and Tiffany were at a crossroads in their friendship, they sat down and hashed it out until things were better and she advises Issa to do the same. Then Issa goes home and smokes a joint and thinks about Kelli’s words. Instead of calling Molly though, she looks at her Block Party page and responds to people’s praise, telling them to stay tuned because she’s going to throw another event soon.

Issa is feeling good. She feels so good, she forgets that her fridge is empty and hops in the car and heads to her favorite Ethiopian restaurant. When she arrives, she goes to open the door and sees that Molly is inside, eating at the counter. Suddenly and quite metaphorically, Issa has to decide if she will go through the door and address Molly and their problems or walk away. So what does Issa do? She walks back to her car. Yikes. Looks like the problems between Issa and Molly aren’t going to get solved anytime soon.

Insecure airs Sundays on HBO at 10 p.m. ET/PT. See you again next week!