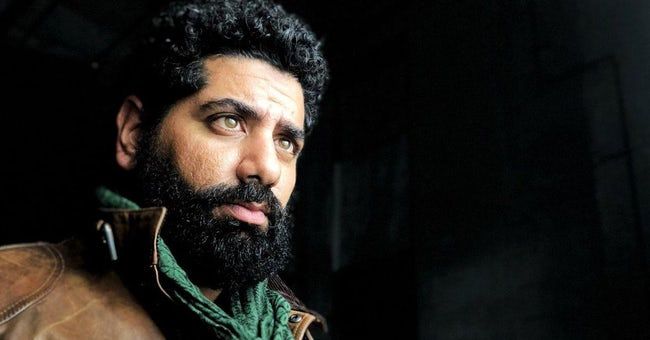 Mousa Kraish plays the sullen, yet suave, Jinn on the Starz show American Gods. The show about an impending conflict between the Old Gods and The New Gods is now in its second season. The Jinn is a demon with actual fire in his eyes, and with love in his heart for a meek Muslim immigrant named Salim. Fans have been following their romance since season one when the Jinn liberated Salim from a miserable existence. Kraish has become an icon for LGBTQ Muslims and people of color who struggle with religious difference.

Kraish is a Brooklynite raised in on the same streets that birthed hip-hop. Like most writers of color, he has been paying his dues in parts that slowly grew to showcase his acting chops. Yes, he has even played the taxi driver (a role akin to the gang member for black actors). In American Gods, the actor has been able to show his range while also exploring other roles behind the camera. He’s also been putting his degrees (a BFA in Creative Writing and a BA in Film) to good use in engaging the fans on social media.

I got to ask Kraish a few fan questions while getting a little bit more info on his Twitter “beefs,” especially those with Ricky Whittle (who plays Shadow in the show) and Rodney Barnes (writer and producer). He was candid about his answers while revealing a bit about the Jinn that we had yet to see.

The Truth about the Twitter Feuds and Ricky Whittle Obsession

The first question I asked had to be about the Twitter feuds between the Kraish and Whittle. Kraish has fired off several memes toward Whittle, and even some NSFW fanfiction featuring their respective characters. There are also some very funny videos. Whittle engages at every turn. The fans wanted to know if the beef was real and where it comes from. Well, Kraish revealed that the atmosphere behind the scenes is like a high school cafeteria. They are all friends and sitting at the same table. However, their crew is unsupervised and as we all know pranks will ensue in this environment 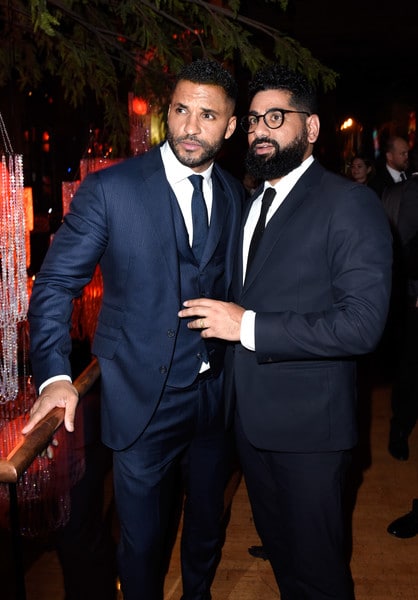 That’s actually how the beef between Kraish and Whittle started.

“[Whittle] started to prank everyone when we were on set. Ricky did a prank on me.” He says that Whittle was pranking people on the set when Kraish warned that he will return each prank with zeal. “I’m the wrong one to prank because I’m gonna come back on you 100-fold my friend,” he warned told Whittle.

That warning became a challenge of sorts and the social media “feud” began. Lifesize cut-outs, trailers full of water and other pranks (including Whittle’s trailer papered with Kraish’s headshots) ensued and things hit social media. What now seems like an obsession with one another is really an escalating game of pranks that for now, have no end.

But, the social media feuding and fanfiction (which we have yet to see the last of, as Kraish says he may be adding more soon), are strictly for fun.

“And what great about him (Whittle) is that he loves it as much as I do. He’s retweeting and we’re all taking care of each other. But there’s like, no beef at all. It’s so much love between us… And it goes with Rodney too. I love him to death. I think he was one of the best writers that we had on the show.”

The Impact of the Jinn and Salim’s Relationship

Kraish pulls from his Palestinian American background to help imbue the Jinn and Salim’s story with authenticity. And, it works. In fact, fans wanted to know how Kraish felt about his new gay fanbase and how it feels to be a part of a relationship that so many people can identify with (a devout Muslim man, dating a mythical demon, or someone outside his faith).

“I mean, for me, why I feel so honored is this fan base is kind of coming out and supporting us characters. One of my big things, when we were coming back to season two, was a real deep discussion with the showrunner and the writers saying, ‘look, I want, we (me and the actors) need more for these characters. We want to see real relationships start to come together. We want this to be…we want this to mirror what, real life is like for people of all sexualities. Not just gay men, but anybody who can relate to being in a relationship with somebody and struggling with having to deal with that relationship in that way.’”

“What I mean by that, because [Salim and the Jinn] are kind of like, this hyper-fantasy.  I don’t see anyone running around with a demon, saying, ‘look I’m in love with a demon.’ what I mean by that is two people who are outcasts and have to struggle to be exactly who they are. The beauty of what the Jinn gives Salim is that he gives Salim permission to be who he is.”

Will the Salim’s Faith Become a Problem?

Fan asking this question are worried about the couple hitting the barriers that organized religion often holds for couples of mixed faiths and for couples who are not cisgendered and heterosexual. Short answer.: It’s already begun to cause trouble.

“Now, in Season Two, we’re starting to see the Jinn question Salim’s beliefs, and pushing, in a sense of saying, ‘hey, after everything that you’ve seen, do you still believe in one God? Do you still believe in your faith?’ [That is] something that’s so near and dear to Salim. How people are in relationships where there are two different beings coming together and trying to compromise with one another? So, it doesn’t matter what sex you are.” 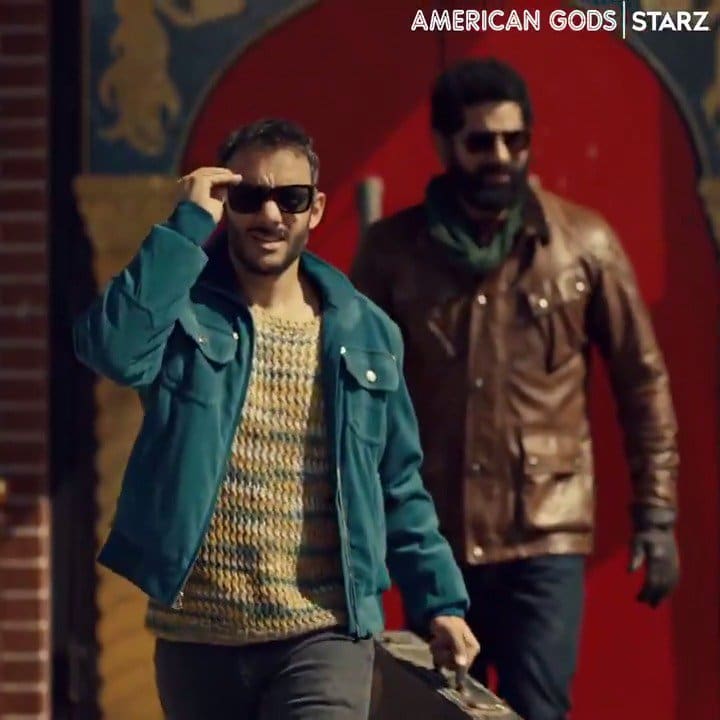 “What’s great about these two characters is saying, ‘Hey, here’s my side. Here’s your side. How are you going to negotiate? Are we going to negotiate?’ And that’s what’s the beauty of the show is you’re seeing two people struggle with their beliefs and trying to come together because their love is stronger than that.

What is the Jinn, really?

The Jinn fandom will agree that this flaming-eyed demon is a walking thirst trap. He is also an enigma of sorts. What does he identify as (because I am not sure if we should be using a “he” pronoun)? Is a demon even capable of love? Kraish put some perspective on the Jinn.

“In my mind, the Jinn is currently with Salim. He’s loved by Salim and encouraged by Salim. I have my own theory on why I think they are connected. There’s a clue in Season 1 of that same episode when he started talking about is connected.”

“But I think the Jinn was somebody who, just like every other God, sexuality isn’t given in the sense of, ‘I only sleep with men or I only sleep with women.’ The Jinn connects with whoever he could. The guy is kind of like if you’ve seen Interview with the Vampire, that old vampire, who has lovers and people coming in and out of his life. And, I think there’s a sadness to that.”

Kraish goes on to say that his character sees so many people he loves coming and going over his immortal life that he never expects anything more than a one-night stand. But, because of their connection, the Jinn and Salim are sticking together for however they can. 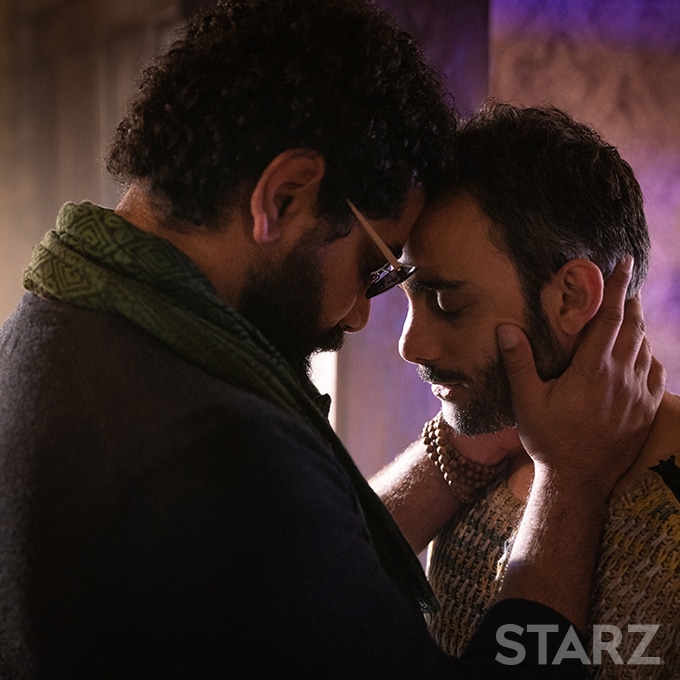 In the end, the Jinn connects who he connects with making his sexuality nonbinary and a lot more undefined. Using the “he” pronoun is cool for now.

Salim is and has been a gay man. Together, the couple will continue to nurture their relationship as the Old Gods march closer to war with the New Gods.

See the Mousa Kraish as the Jinn in American Gods on Starz, each Sunday night at 9. The series finale airs April 28.