The Amy Poehler and Will Ferrell summer comedy The House may be Andrew Jay Cohen’s first job in the director’s seat, but don’t let the “debut” in front of directorial fool you. Cohen has been peddling funny in Hollywood for the last twenty years. Getting an early career start as writing assistants for Judd Apatow (Anchorman) and Adrian Lyne (Unfaithful), he cycled his way through jobs on industry-changing blockbuster comedies like The 40-Year-Old-Virgin, Talladega Nights, Neighbors, and Mike and Dave Need Wedding Dates. Largely well-received by audiences and critics, films Cohen has worked on are most interesting for their ability to find the humor in the mundane. From the dog-eat-dog world of newsmaking and living next to nightmare neighbors to the fear of never having sex and the struggle of finding a wedding date, Cohen’s spent decades developing his talent for marrying timely, relatable issues with the absurd. That makes him the perfect fit for a comedy focused on something that could only be uniquely humorous today: the lengths families to go in order to give their children access to higher education.

We had the chance to chat with Cohen about his film The House, what it was like stepping into the director’s seat for the first time, what he’s learned about comedy from not being an overnight success, and why he makes movies where everyone can be idiots.

Black Girl Nerds: You’ve been in this industry for a while, but this is your first time in the director’s chair. How do you think your past credits have prepared you for this new role?

Andrew Jay Cohen: I’ve watched people do things that were very successful. I’ve also watched it work not so well sometimes. Even with very talented people who meant well and tried hard, sometimes it doesn’t work. So there was a lot of calculus involved. I can show you the whiteboard. [Laughs] No, I’m just kidding. But, yeah you really have to juggle everything and process everything. But seeing anyone from Seth Rogen and Evan Goldberg, Judd Apatow, Adam McKay and Will [Ferrell] together on Talladega Nights was huge. I think demystifying the business for me. I don’t know. How do children learn? By modeling? I think I was trying — I was asking “How do they do it?” They provided such a great example for me to emulate. And then you have to find your own balance or secret sauce.

BGN: You’ve worked on films that haven’t just been successful, but game-changed comedy in terms of where the industry goes with content and tone. Based on the successful projects you’ve worked on, what do you think it takes to make a successful comedy?

Cohen: It’s a really good question and if I knew the answer I would be on an island that I owned. [Laughs] I think they need to strike a nerve. I think Neighbors came at a time when my writing partner and I were feeling old all of a sudden and we realized that we weren’t like young teenagers, but we were still jealous of them. The ambivalence of looking at people who are only 10 years younger and going “That’s a different generation than we are.” Generations used to be like 40 years or something and now they’re like… 10 as far as cultural divide. So that both terrified us and made us laugh really hard.

No one had sort of articulated [that divide] so clearly like with Zack [Efron] and Seth. Even as we were pitching it, because you know we attached Seth and then Zack, when you look at them you go “Okay, there’s some weird spark.” [Laughs] Similarly Will and Amy [Poehler] playing together is something people have wanted to see and they’re surprised that they haven’t. But then also it’s like, college is super expensive and you can’t make ends meet sometimes. That makes you feel like not a man or not a woman, or not a dad and not a mom. I think it’s that darkness of Am I good enough? Am I doing enough? What if I’m bad at this and I screw it up? That would suck. The fear and anxiety of that is real.

I feel like I want to make comedies about different things that are on the tips of people’s tongues. Or are right in front of them that they aren’t articulating yet.

BGN: Neighbors felt evergreen, but The House feels much more timely. Which raises the question: Could you have made a comedy about a family struggling to pay college tuition before it became clear we had a cultural student debt crisis? And is finding the right story a personal thing or are you influenced by the culture at large?

Cohen: I love being influenced by everything. I’ll get influence from every angle, it doesn’t matter. So it’s both. The culture is in a really dark time right now and I think viewers will be surprised by how weirdly dark [this movie] is. It’s evocative of the times, but then also there is this autobiographical element. You know, I have two kids and I’m looking at my 529 and its got zero dollars and then I look in my bank account and there’s not much more. You have that terror and you just try to deal with it through making a movie.

BGN: So just to jump back to your rise to the director’s chair, do you feel like that was very conventional? Because I don’t. I think there’s an expectation that sometimes people just break out over night and for certain people that’s true. But as director’s talk about this more, we see there’s a grind, networking building, and patience. Which can be disheartening and relieving I think, depending on who you ask.

Cohen: So I tried to poke at the business in every single way that I could. First my technique was I just want to make sure that I’m in the room. So I ran into the belly of the beast as quickly as possible. I worked at Creative Arts Agency, and you know, they’re more of an agency. So like a top-down, this project, that project place. But then that enabled me to connect with Adrian Lyne and serve as his writing assistant on Unfaithful. Everything connected to something in someway, but it’s a grab bag. You just do it. You’re a tradesman, sort of?

Even working for Apatow on Anchorman, he offered me the chance to produce the DVD for Freaks and Geeks and the Undeclared DVD. I was like, “I don’t want to be a DVD producer,” but then it was a great film school because I had to watch all those dailies and figure out what’s the funniest deleted scene. You have to make a movie backwards because you’re watching what they’ve shot. You realize what a director can do. All the jobs I did weirdly add up to some lense of looking at movies. And I think writing [The House’s] script and then saying, “Hey I’ve got to direct this” was something I had to become comfortable with. Nobody wants you to direct. They just want you to write it and then they’ll go and get a director who has done it before. 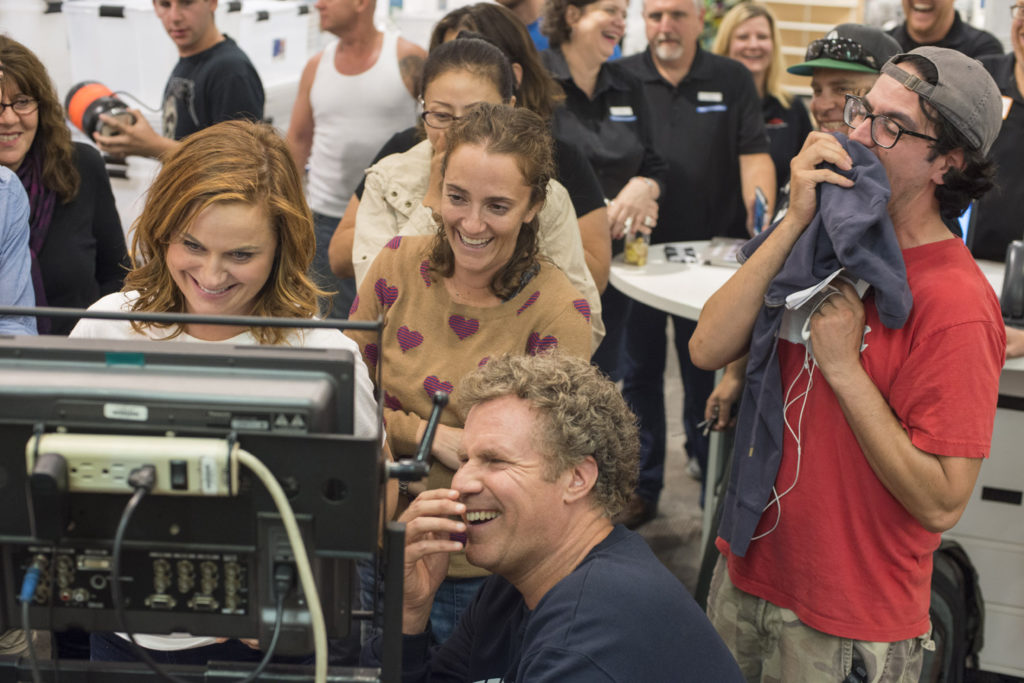 BGN: The House stars two pretty recognizable Saturday Night Live alums and Hollywood comedians who are well trained in being funny on the spot. What was it like directing folks like Amy and Will? Was it just letting them have at it or was it trying something, grouping and then trying something else together?

Cohen: It’s a combo of everything. I like to get out of people’s way, especially professional comedians like Will and Amy. Jason Mantzoukas as well could almost self-generate and then find new direction. Then I’m hugely vocal. I think part of it is by design. I wanted to communicate with Will. I’d yell out lines. Writers would be handing me jokes. There’s a lot of flexibility while guiding the ship. And they’re vulnerable sometimes. They’re inside it so sometimes they need someone outside of it to tell them whether it was good or not. Other times, Amy and Will would flat out come up with scene ideas. There’s a sequence when they come home drunk and they have to like avoid their kid, but Amy is like, “Should I pee on the front lawn?” We were like, “Yeah, of course, why wouldn’t you?” [Laughs] That’s what she brought to us: this wild imagination. Same thing with Will. There’s a scene where they’re in Vegas and he jumps on the craps table and [on set] he like whispered, “Should I jump on the craps table?” I was like “Absolutely!” These gems that they would bring to the part — I love it. I like running a set where everybody’s got ideas. I mean, you always shoot the script, it’s really important to do–two takes of the script. And then I love it when they keep going with it.

BGN: In previous interviews for The House, you’ve talked about how you approached Amy’s co-lead status. That instead of choosing to make her just the “mom” or “the wife,” you gave her character, Kate, a more active role. Many of the films you’ve worked on focus on partners, but you gave equal weight to Rose Byrne’s character in Neighbors as well. That’s not an entirely common thing in comedies that include leading men. Is that elevation for women something you want to be a part of your “brand” of comedy?

Cohen: They’re co-leads in life, so it’s just reflecting a reality that I live in. Which is that my wife is a huge part of my life. I base a lot of decisions on opinions that she has, or responsibilities within our family. Life is so complicated so show all the complications of that. And men, women, whoever — why say that only men can be idiots? I will defend a woman’s right to be an idiot. Paris Barclay, [former] President of the Directors Guild of America, said something like that about black actors. He didn’t want squeaky clean black men who aren’t complicated and don’t have a depth. Sometimes you think you’re doing everyone a favor by only making certain characters surfacely good, but it’s good when people have flaws. When they have depth. All the best characters are really flawed.

This interview has been edited for length and clarity.

Abbey White is a freelance entertainment and identities journalist who has written for USA TODAY Network, The Mary Sue, Black Girl Nerds, ScreenSpy and Paste Magazine, among other outlets. She currently lives in New York City where she serves as an editorial intern for The Nation magazine.