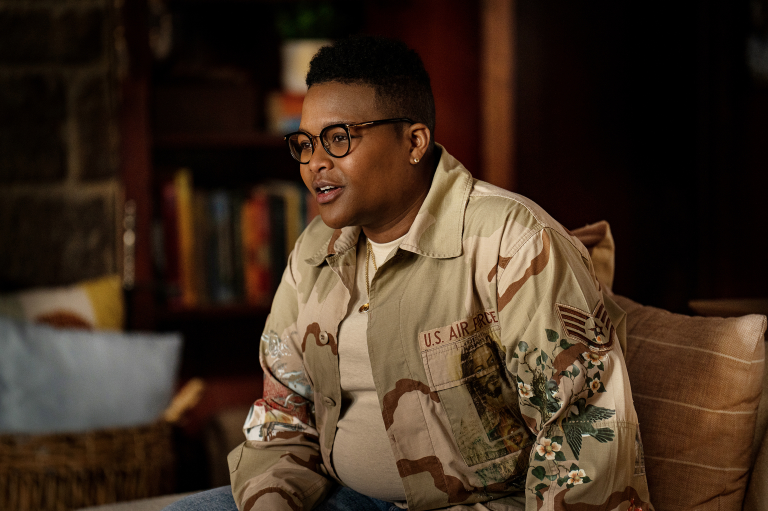 When you sit down with the comedian, Emmy-nominated Saturday Night Live writer, and host of HBO late-night series PAUSE with Sam Jay, at least if you’re me, you get the feeling like you came at the wrong time. A twenty-minute Zoom meeting is fine for establishing the facts, but it’s not enough for getting into the spirit of things.

There are glimpses, yes, of the fun one usually sees on Jay’s hilarious and often brutally personal talk/sketch show. However, maybe because the setting is more formal than the laid-back bars and lofts where Jay and her friends typically have PAUSE’s lively discussions about everything from sexual miscalculations to being a rude kid in school, the vibe is off. Stilted.

Then again, I may just be a bad and/or boring interviewer. But I also get the feeling Jay doesn’t necessarily like interviews. As she tells me about the format of her HBO show, she prefers dynamic discussions to interviews.

Part of the feeling I get may just come from the fact that Jay is a Boston comedian by way of Atlanta. Why does it matter that she’s from Boston? To quote her, “I think Boston is also a cynical town.” This cynicism may work in a few ways. On the one hand, it may make you wary and a little wearied by answering questions that are similar, if not unintentional facsimiles, of ones you’ve been asked before. On the other hand, in Jay’s estimation, this cynicism is also one of the main ingredients of what she calls “comedy soup,” the sausages (maybe even the shrimp?) in a comedic gumbo.

If you’ve seen Episode 2 of PAUSE’s latest season, titled “The Crackas Is Coming,” you might see some of this apparent cynicism.

At one point, in an absorbing interview (read: frank discussion) with a psychologist, Jay asks what the components of an abusive relationship are. The therapist, a white woman, outlines the signs — trauma bonding, gaslighting, a lack of empathy — and Jay asks if Black people are in an abusive relationship with white people in America. “Yes,” the therapist says. “Well,” Jay responds, “do we need to leave?”

The audience never finds out the psychologist’s answer.

If that situation didn’t read like out-and-out cynicism, that’s because it isn’t. Another part of what I believe Sam Jay’s comedy gumbo to be is empathy. Yes, she tells me, writers’ room arguments were what led to the show having its looser format where several people have often overlapping discussions over drinks while a camera follows along. “As we were building the show, I just kind of felt like it still wasn’t resonating. Like the vehicle you’re using just sort of didn’t feel correct. And when I was kicking it with one of the writers, we were drinking and just arguing, and I was like, ‘Oh, it should feel like this.’” The writer agreed, and he and Jay took the idea back to producer and co-creator Prentice Penny (Insecure, Happy Endings, Girlfriends). He and HBO agreed, giving Jay the leeway to make the show structured however she saw fit.

As a result, we get a show with a surprising — and, depending on who you are, frustrating — amount of empathy. We get a show trying to see where people are coming from and what makes them tick, even if it seems like the most vocal folks on Twitter have seemingly closed the books on any given conversation.

This process of building a comedy show built around people’s personal struggles begins with Jay and the things she’s experienced. “It’s a very personal season. I talk about prison because my brother went to jail, and, like, what that did to the family. I talk about cheating because I just went through that with my girl, and we just got on the other side of that stuff.” As far as pressure to become a topical late-night talk show goes, Jay has this opinion: “There’s enough people taking the topics of the day and saying their opinions about them. I feel like that space is filled. Beyond filled. And so we’re trying to make a show that fit in another space that wasn’t being occupied.”

The other space the show fills is certainly something different.

It comes from a place of pro-Blackness, but it asks “Woods Whites,” that is, white guys who might hang out in the woods on purpose for fun, what their deal is. It asks the same therapist from earlier why white women don’t seem to be on the lookout for white men and their potential struggles the way Black women, in Jay’s view, tend to look out for Black men.

If the previous sentence just sent you into a fit of reflexive hand-wringing, well, that’s the show. I ask her if the idea of pushback for looking at every angle of an issue — what we might sometimes too simply call “both sides” — makes her want to steer clear of it. “I don’t know if you can avoid that,” she says, “but I don’t know that I can cater to that either.” She adds, “There’s also other shows that don’t do that.” She says with a laugh, “That’s what this show does. If you’re not into that, that’s cool.”

What seems to be Jay’s whole thing at the end of the day is mixing laughs with genuine emotion, trying to get an understanding even for people from the so-called other side.

“I’m really curious. If we’re out here talking, I’m curious. It’s also I’m genuinely interested in what this person is going to say and why they are thinking or moving the way that they’re moving. It’s a genuine curiosity there.”

I ask where this need for empathy, and, therefore, understanding, comes from and how it affects her show.

“I had to live with a lot of different people after my mom died. I’ve seen people’s behavior switched, and I’ve seen just a lot of sh*t that kind of forced me to be empathetic and to realize that everybody’s carrying their own stuff with them. And a lot of times it’s that stuff that makes people act the way they act. Not this natural evil or good, but just life and its circumstances and where they bring you. And so I don’t think I would have survived a lot of this shit I survived mentally if I couldn’t make space for that thought process. Then I would have been holding on to so much bitter sh*t, and it would have destroyed me.”

As far as the show goes?

“[Empathy] just became a part of my personality. The show has that in it because it’s truly in me.”

So, Sam Jay’s comedy soup is one part Bostonian cynicism, one part empathy, and a large part of laughs. It’s certainly not for everyone, but, then again, what food is?

Seasons 1 and 2 of PAUSE with Sam Jay are available to stream on HBO Max.