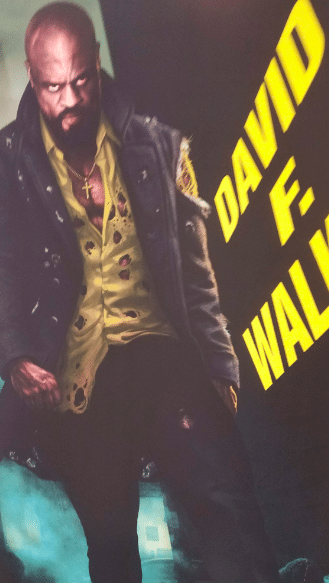 His current effort with Brian Michael Bendis and Jamal Campbell on Naomi have the potential to shake the foundations of the DC Universe. However, Walker’s other projects are moving to do the same here in the real universe.  His series with Sanford Greene, Bitter Root, was released in November 2018 and has been nominated for a Best New Series, 2019 Will Eisner Comics Industry Award. 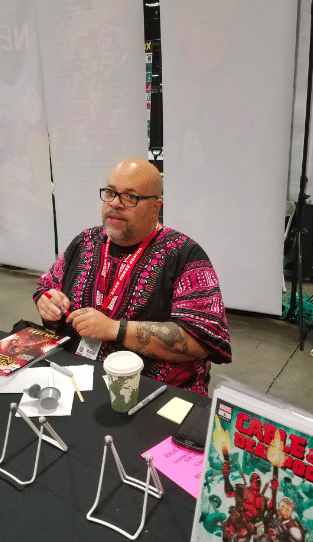 True to the real Walker, at his table at Awesomecon, the first title to sell out was his trade paperback about Frederick Douglas, which seems fitting as he comes across as an educator regardless of whether he is writing a story for the media, penning a comic book, or teaching a class.  BGN sat down with Walker at Awesomecon soon after the nominations were announced.

The last time we talked, you indicated that each issue of Naomi would reveal a little more about first, the town and the town folk. Then, we also now know a little bit about her parents. What does she discover next?

In general, she is going to discover where she is from, who her biological… She’s going to discover everything. Everything will be revealed by the end of issue six and it will be a lot of surprises, not just to her, but to the readers. Then, moving forward, the discovery, then it becomes the defining in all of these things because as secrets are revealed to her, new conflicts, the new drama is going to open up.

The previous infers that Naomi assumes some role in the pantheon of DC heroes. What plan does DC have for the character?

Jamal, the artist, is contracted to do another gig and Brian and I have said, we don’t want to do it without Jamal. He is a crucial part of the team. But the reality is, is Jamal’s locked down after this for a little while. But our intention was always to introduce a new character to the DC universe and to have her be not only, an active participant in that universe interacting with established characters, but bringing a whole lot of new stuff to the DC universe. What we really wanted to do was to create a character and a series that would have a certain amount of appeal to longterm fans, but would be easily accessible to new fans.

A lot of times, when a new character is brought in, they’re so mired in all of this back history, right? Well, everything that Naomi is discovering about herself and her true origins, the readers are discovering along with her. It’s not like-

Yeah, yeah. It’s not like, “Oh, she’s really from Krypton.” Or, “Oh, she’s really from Atlantis.” It’s like, “No, you do not know where she’s from.” The funny thing is, there are always people speculating and Brian and I have said, “This is all new.” And now people are guessing things and my response is, “Well, we’re four issues in, have we done anything that you’ve expected?” 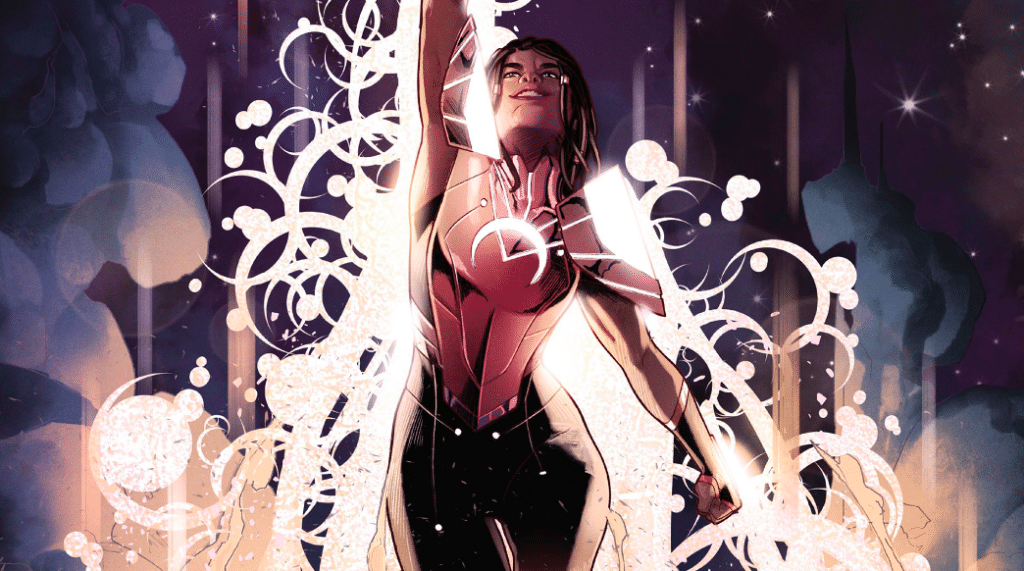 Now the big thing is, everyone’s like, “Oh, she’s a white lantern.” And I’m like, “Well, first of all, that’s not the white lantern symbol.” It’s a Rorschach test really, for what people either think or what they want. So I’m not saying that she is or isn’t a white lantern. But I will say, have we done anything in these first four issues to indicate that that’s the direction we’re really going? If that’s what you want to believe, you might be disappointed.

All right, has the public’s perception of the title opened other creative opportunities for you and your publishing company?

Yes and no. I mean, it’s interesting because you look at my table and Bitter Root and Naomi are sitting right next to each other and people are like, “Oh, you do these two books?” They’ll know Bitter Root, but they don’t know Naomi or they Naomi, but they don’t know Bitter Root. People pay attention only to certain things. And that’s fine. With Solid Comix, it’s definitely helped right now. I think it’s helped more with the press and people like that because I’m making waves right now.

You get an opportunity in the spotlight, try not to blow it. There was a certain amount of calculated thought going into this because I knew that late 2018, 2019, there are some big things we’re going to be happening. Bitter Root was going to come out, Naomi was going to come out, my Frederick Douglass book was going to come out. I knew all these things were coming and so, it was like a race to get Solid Comix ready. ‘Cause I’d been developing Solid Comix for a while and it was like, “Okay, we’re going to launch a Kickstarter. Let’s launch a Kickstarter while there’s, hopefully, fingers crossed, there’s good press.” And there was good press and so that definitely helped.

Last year you had teamed up with Chuck Brown and Sanford Greene on Bitter Root. What is it about?

Bitter Root, it’s set against the backdrop of the Harlem Renaissance. It’s about a family of monster hunters and in this world that we built, monsters are people who are infected and transformed by hate and racism and greed and all the isms that make the world an ugly place. This particular family, the Sangerye family, they are torn. They’re the last in the line of the family. Most of them had been killed off and they’re torn between the do you cure or do you kill? So that opens up this question, a much deeper philosophical question, of what do you do with the agents of your own oppression? Do you try to heal them or do you try to destroy them? And then, if you destroy them, what does that do to you? What do you become in the process?

The Eisner nominations were announced recently and it’s our understanding that congratulations are in order.

Yes, thank you… If I was a betting man, I would bet on Chelsea Cain, Man Hunters or Man-Eaters. That’s what I would bet on, as best new series. ‘Cause honestly, hey, I love what we’re doing with Bitter Root. But what Chelsea and her team are doing with Man-Eaters is next level. It’s just brilliant. She’s one of the most brilliant writers I know. She’s a great human being, and honestly, it sounds like a cliche to say it, but it is an honor just to be nominated. For me, I’m not a very competitive person. So that idea of four or five titles vying for best new series doesn’t always sit well with me because we’re all very different in what we’re doing.

So while one person may love Bitter Root, another person, it might not be their cup of tea. So how do we define what is best? But that said, it’d be great to win. This is my first time being nominated for this particular award and it feels good.

I noticed during the Con that you’re selling a volume about Frederick Douglass. Is this your first nonfiction title?

This is my first nonfiction work of any great length, yes and it won’t be my last. Nonfiction was an area I wanted to get into for a long time. Even before March by Andrew Aydin, Nate Powell, and John Lewis came out. March really inspired me in a way that was like, I knew this is part of what I wanted to do, but there wasn’t much of a market for it yet. Then March came out, I was approached about doing a Frederick Douglass Book and Frederick Douglas wasn’t the subject that I was really thinking about. But I was like, “Yeah, let’s do it. Let’s see what nonfiction is like. Let’s get into that world. Let’s explore it. Let me dust off my reporter-researcher shops.” It was a very difficult process. I’m not going to say it was fun writing that book, but the end result was very satisfying. Now, my next nonfiction book is going to be one of the top five nonfiction subjects, I wanted to do a nonfiction book on.

Professionally, when you come to cons, what do you get out of it? I mean, there was an author here at the table when I walked up. What is the benefit for you of coming to a con, from a professional standpoint?

It’s interaction with your fellow creators. It is meeting the fans. At this show it’s, I ain’t going to lie, it’s the amount of Black and brown folks that I’m seeing. I mean, we’re in a chocolate city. There was a brother here who was the Silver Surfer. There was a time when the only Black cosplayers you saw were dressing up as Black characters.

But conversely, I see white kids dressed up as Black Panther. Thankfully, they don’t have on Blackface, but it’s like, this is a beautiful thing to me. This says, that these characters are transcending and that you’re finding things to relate to within them. But yeah, I just love the level of diversity at this show. Honestly, that in and of itself is very energizing to my spirit.

Walker is a real talent that seems to be coming into his due.  Issue 5 of Bitter Root hit comic book shelves recently.  A summer special issue is slated for the summer that explores the origins of Walker’s monster hunters from Bitter Root.  However, I am patiently awaiting a future non-fiction title that should educate as well as entertain.  But in the meantime, I will be anxiously awaiting the next issue of Naomi to find out what happens next.

E.Angel is an engineer and holds a BS in electrical engineering from North Carolina A&T State University.  In her spare time, she works at her comic book store – Brainstorm Comics and Gaming – when she is not writing.  She’s a real nerd who loves all things Star Wars and Star Trek and is an avid gamer. E.Angel can be reached at e9of10@gmail.com or on either game platform as Bunnehs Sister.