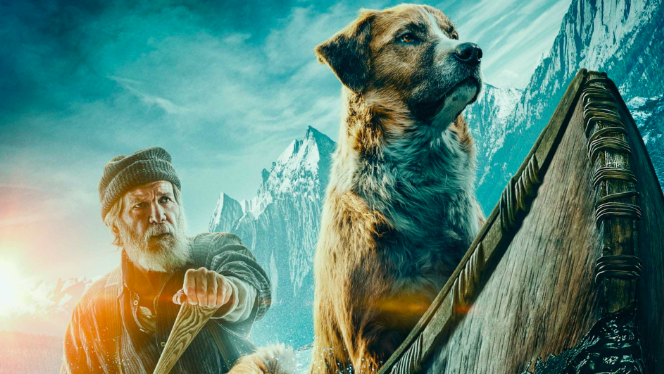 The Call of the Wild is the latest addition in the Twentieth Century Studios lineup.

The film is a coming of age story following, Buck, a kind-hearted dog who is kidnapped from his loving California home and thrown into the wildlife of the Alaskan Yukon, searching for his place in the world. BGN got a chance to chat with director Chris Sanders and cast members, Harrison Ford and Cara Gee. It was a fun day full of emotional revelations. Take a look at some of the more tender moments and cool insights of the day. The Call of the Wild is in theaters February 21.

One of the things that I really liked about this adaptation was the fact that we didn’t see any on-screen deaths of the animals. We see the shadow of the action of a dog getting beaten, but we don’t see it fully on-screen. What was your intention with that?

Director Chris Sanders: One of the most important things at the beginning of the project was being able to guarantee Fox that we could do this novel in a family-friendly way, for a broad audience. And because I come from animation, from Disney Animation and from Dreamworks, that’s something that’s second nature to me. I knew that no matter what was in the novel, we could adapt it. That was one of the very first things we talked about, the scene with Red Sweater and how we were to do that. I said, “Well, at that critical moment, we’ll do that with a shadow on the wall so that we know what happened.” But nobody ever had to really see it. That was my wife’s worry. She was like, “I really don’t want to see that dog get beat.”

How did you determine the look of Buck?

Sanders: Every dog in the film has a real live-action counterpart. Two reasons: it shortcuts the building process for the dogs but it also gives them believability. Buck, the lead dog, was the only one that we didn’t have because he’s very unique. Jack London very clearly described him as a mix of two breeds, St. Bernard and Farm Shepherd. We didn’t have one of those, and early on we thought, well, what about Bernese Mountain Dog? They’re very dramatic. They’re very beautiful. Anything that you see, in fact, if you look very carefully in Thornton’s cabin, on the back wall is a drawing of a Burmese mountain dog because that was the intent when he was sketching Buck. But, because those dogs are so predominantly black, I began to get really concerned about how many shots we have at night and how well that dog would read. Then my wife, in October, was looking through PetFinder. She said, “You’ll never guess what I found. A dog that was found as a stray wandering the streets of Kansas. And he’s the exact combination of breeds of Buck.” The weird thing was he was listed on their website under the name Buckley. So she said, “I’m going to go.” She drove two days to Kansas, she met Buckley, and she bought him for $25 because he was unspecial and because nobody was buying him. She drove back to set with Buckley and walked onto the set with him, and immediately, I think everybody just said, “Let’s make that be the dog.” So we took Buckley to Gentle Giant and we scanned him. He’s the lead. He lives with me now.

As you think about the relationship the character John has with Buck, do you have a fond moment or memory with an animal in your own life?

Harrison Ford: Yeah. I probably had a dozen dogs in my life, over my lifetime, which has been considerable. And all of them have been important to me. What comes to mind is the passing of our 14-year-old dog two summers ago. Kita. [Gets a little emotional.] Thanks. I needed that today.

How do you hope this story inspires people to be better, to do more?

Ford: I think that any emotional exercise, any opportunity to experience your common humanity with other people who you don’t know, who don’t look like you, who don’t act like you, who think other things, who live other places, who are different color or different instinctual behavior, that’s what makes us human. That’s what reminds us that it’s not just about us, it’s about all of us.

What was it like acting opposite a human playing a dog?

Ford: Convincingly playing a dog that was human was fun. I mean, I hadn’t imagined quite how it was going to work. It seemed a little weird, but Terry Notary, who stood in for the dog, is an accomplished actor and a gifted Cirque du Soleil gymnast. So he developed the skill to move like a dog and to help everyone organize their eye-line, where they were looking. For me also, I had the opportunity to create an emotional relationship with the character that Terry was playing. And, well, we crossed some biological lines.

Cara, how did you get involved in this story?

Cara Gee: Well, so I’m Canadian. I had been based in Toronto for a decade, and I worked a lot in theater, and then I made the big move to Los Angeles. Then a month later I booked this movie, and I was like, “Oh, is this what happens? You move to Hollywood and then you just do a movie with Harrison Ford.” It was a real thrill to be cast for sure. The story is so beautiful. Christopher Sanders, our director, if you’ve seen any of his other films, there’s so much magic in them. And so to get to be a part of telling this story in that way was a real privilege and an honor. And I’m so proud of how it turned out. I think there’s a real sense of wonder and awe and there’s this sort of storybook quality to it that remarkable VFX team was able to achieve.

This character was originally a man. What’s the bigger societal element in the picture for women right now?

Gee: I feel extremely proud, as an Indigenous woman, to be playing this role. I got to work with a woman named Carol, who is a member of the Tlingit Nation. They’re the people who are indigenous to that land. She was a cultural advisor on the project, and her granny was a musher in the 1920s and ’30s. So that’s a very similar time frame. I mean, the Indigenous people of that region invented dog sledding. So to be a part of that storytelling tradition was really important to me. To have her as a touchstone was really incredible, to feel that lineage and to feel a part of that. And honoring and respecting that was very important. I’m from a very small town called Bobcaygeon, Ontario. Tonight I’m going to walk a red carpet as an Ojibwe woman. That is really powerful. It means a lot. The character is strong and complex and funny and joyful. I think that is something that is so rare. For people of color, we so often see stories that are about our trauma. I call it performing trauma. That’s something that comes up again and again. It’s actually incredibly rare and beautiful to be a part of something that is joyful and fun, full of awe and wonder, and for the next generation to be able to look at and feel proud and inspired.