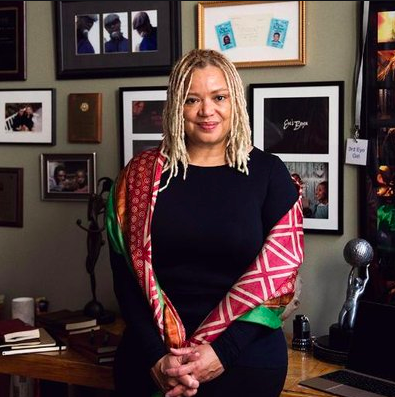 Quote: “We all saw it as a female empowerment film, but I really viewed it as an adventure film as well,” Kasi Lemmons says. “I was interested in the things that you don’t know about Harriet Tubman.

Harriet is a heroic tale about American freedom fighter Harriet Tubman, who escaped from slavery only to help many others do the same as she became instrumental in changing the course of history.

Full of adventure, love, and courage, Harriet (written by Gregory Allen Howard and Kasi Lemmons) is sure to become an iconic film about an iconic woman (played by Cynthia Erivo), directed by an equally iconic woman, Kasi Lemmons. We sat down with Lemmons at the Toronto International Film Festival (TIFF) to talk about this wonderful film she helmed to greatness.

We were curious about everything from the nuanced, layered depictions of Black folks throughout the film in different stages of life from slavery to freedom, to Lemmons working with a cast of newcomers, including powerhouse singers and actors, and beautiful moments she experienced in the film.

Harriet goes on a journey, clearly, and meets many different people as she experiences freedom. It is important to show that people were having these different lives, which was done beautifully. There will be moments in the film where audiences may interpret scenes of freedom as a modern-day privilege and access afforded to only some Black folk; like between Marie [played by Janelle Monáe] and Harriet. How did you work through this, how did this process inform you?

It was very effortless. One moment that I love in this wonderful friendship between Harriet and Marie — Marie is a free woman, and a very beautiful woman, and a very composed and centered woman, and I love the moment where Marie says, “You stink,” and Harriet responds, “You’ve never had the stink of fear.” I love the empathy in Marie. “You’re right Harriet,” she says, and she apologizes. That moment is something I wrote in the script, and it became very important to me.

Can you identify or describe what your leadership style is and what it was like on set?

What I aim to be is intense, but zen and cheerful. As an actor, I go to work with directors that I love, and I got to take different pieces that I love and say, “That’s how I want to be.” I worked with the late, great, Jonathan Demme; he was excited, present, intense, and cheerful and zen. All of those things. And when I worked with him, I thought if I ever direct, that’s just how I want to be. The vibe on a movie comes from the top down, so I try to create a very safe environment and a kind of upbeat world. We’re in this together; we’re doing this together.

It must have been beautiful being able to lead all of these people, to work with family and having newcomers like Jennifer, and as well as having Joe who was new to the story. What was that like?

We talked a lot about character. I had backstories for all of them, and we talked a lot about the history. The cast all came to us hungry. Joe came to this hungry. He was asking, “What should I read? What documentary should I see?” I said, “Ken Burns’s Civil War.” I could steer them in that way. I’m a writer, so to me, they’re all — even the terrible ones — they’re all interesting and human. I tried to be humane to all of them.

Did you have a lot of time with them one-on-one?

We had a lot of time in terms of talking about it in preparation, and we had some rehearsal. Most of the major scenes and major characters we rehearsed — Joe and Cynthia, Jennifer, Clarke, we definitely rehearsed.

What was the one defining moment for you in the film?

Oh my god, there were so many. But one incredible day was Harriet’s walk into freedom. It was just incredible. As a director, your job is to plan things out, so I knew exactly what I wanted to shoot and what time of day I wanted to shoot exactly. We were going to shoot at sunset and play it for sunrise for her walk into freedom. We found a great hill. We had it all planned out except that we came to work that day and it was pouring.

It was miserable pouring rain, a dreary, ugly, gross day. Time was getting away from us, and we were starting to think we weren’t going to get the shot. And that maybe we shouldn’t get it. No, [I said], we’re going to go to the top of the hill. The sky was black. I was rushing hair and makeup to get Cynthia to get the crane built and to get her through hair and makeup.

Cynthia came at the exact moment the crane was being built, and, at that moment, the sky cleared, the sun shone through  It was the most amazing sunset you’ve ever seen. In one take she walked on through to freedom. It was a magic moment. There was a double rainbow behind us. Everyone burst into tears. It was one of the most amazing moments I’ve ever had filming.