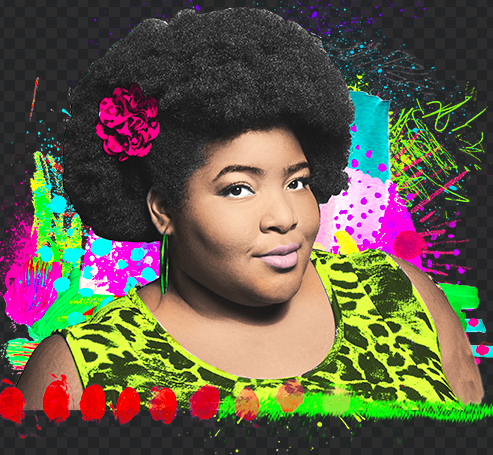 Dulcé Sloan kowtows to no one. On stage, she is a bombastic performer, her delivery brazen and bold.

On stage, she emits a fearlessness that commands respect — you paid to see her, now you’re going to listen.

In the last few years, the Atlanta-born comic has risen quickly through the ranks. It wasn’t long before her engaging personality and whip-smart comedy attracted Hollywood’s attention, and Dulcé has accommodated herself nicely. She was hailed as a Comedian to Watch in Variety magazine, Rolling Stone, Time Out LA, and on The Steve Harvey Show. In 2017, Dulcé landed a coveted role as a correspondent on The Daily Show with Trevor Noah, where her hilarious commentary has reached a new audience. The rising star has stayed booked, and she has more surprises in store, including her October 25th Comedy Central Presents standup special and ensemble role in the upcoming animated FOX series The Great North.

Black Girl Nerds chatted with Dulcé about making it as a Black woman in comedy, fighting stereotypes, why she’d rather not live in New York City, and what secret she is taking to the grave.

Employment. I wasn’t one of those people whose parents worked with them until they achieved their dreams. I still had to do what I wanted to do with my life as well as have a day job. Like I didn’t have the opportunity to go, “Okay, well I’m gonna quit my job and my parents are going to pay my bills,” so I had to find opportunities and make opportunities for myself [like] working a day job.

The next in your series of accomplishments is your half-hour Comedy Central Presents stand-up special, which premiered on Comedy Central October 25. One of my favorite bits is your entire rant about being forced to move to New York.

Well as I revisit, I just say I was forced to move to New York because it’s such…the sentence itself, when someone is forced to do something they honestly don’t want to do, for me to end it in something good… [I just] slipped it on the audience. It was giving you the idea of people’s view of New York because I’m telling you, in every interview, I’d do it was people just being surprised — that I don’t like a city that smells like garbage 100% of the time.

I’ve also noticed that you’re pretty comfortable on stage and not afraid of talking about issues of race or gender. Do you ever have to feel a sense of responsibility in doing that? Do you ever change or hold back on material?

Do you think the path is easier for the next generation of Black female comics?

I think now that people won’t be afraid to voice whether they feel they’re not being treated well by other comics. I feel there was a problem where no comics of color felt safe or appreciated in their space. I think that’s changing.

What advice would you give to any young Black girls who are aspiring comedians or maybe looking to people like you and thinking, “Oh, this is something that I want to do,” or “Hey, she can do this. I can do it, too.”

I would say do the rooms that you want to do. A lot of times as Black women you’re pushed in different directions and made to feel that you are not doing it correctly if you don’t do what is expected of you. You need to be able to just be comfortable in where you are. There’s nothing that requires you to deal with stuff you don’t have to deal with. If you don’t feel like that place is supportive for whatever reason, stop going there. If you don’t feel like they’re putting you up because you’re Black, that they’re not putting you up because you’re a woman — tell everybody. Tell everybody to just go to another place because it makes no sense to focus on the one place that doesn’t want to put you up when you can find other places that will. That has to be your motivator. Go where you are supported, and go where you can get a chance. If you want to do this, there will be a lot of times where just being there will get you up there. So go out. Talk about what you want to talk about. Don’t let people tell you what you’re supposed to talk about.

If I’m a Black person and my whole standup is about anime then fine, it’s anime. See, Black people, white people, and Black women put Black people in a box for what they’re supposed to talk about, that they should act like they do. There’s not a model. All of us grow up different. I think you have to be able to give each other the space to be different. So I would love to see Black comics come and talk about whatever they want to talk about. Leave us the hell alone.

Last question. What is something people would be shocked to know about you?

Uh, I have two cats.

Nothing in particular that you’ve never revealed about yourself?

You know, I’ve never seen the movie the Baby Boy.

And I’ve never seen Bebe’s Kids. And honestly, I have to keep it that way now. I can’t watch it.

Now everybody knows I haven’t seen it. This is my narrative now, okay? I’m a Black person who’s never seen Bebe’s Kids. I’ve gotta take this to the grave.

You can catch Dulcé Sloan’s special on Comedy Central and her upcoming appearance on Fox’s The Great North premieres in the Spring of 2020.