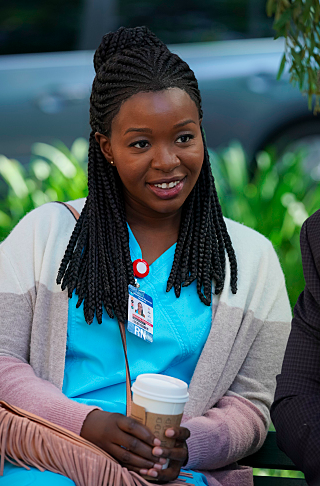 Bob ♥ Abishola is a love story about a middle-aged compression sock businessman from Detroit who, while recovering from a heart attack, unexpectedly falls for his cardiac nurse, a Nigerian immigrant, and he sets his sights on winning her over. The series is created by award-winning producer Chuck Lorre and co-created by comedian Gina Yashere, best known from her work on Comedy Central’s The Daily Show.

The youngest of 20 kids, Folake Olowofoyeku is a Nigerian-born actress of Yoruba descent playing a Nigerian role on the first American sitcom featuring a Nigerian family. Despite her parent’s desire for her to study economics and attend law school, Folake moved from Nigeria to New York and began studying acting at the City College of New York, graduating with a B.A. with honors in theater. In addition to theater arts, she knows her way around a basketball court, competing in the NCAA Women’s Division III for the Beavers while at City College, and she’s a self-taught guitar player.

Folake sat down with BGN to discuss her role as Abishola, working with her co-star Billy Gardell, and why she believes it’s worth your time to check out this series.

Briefly tell us about your character in this series.

My character has moved to America, to Detroit, and she’s been very specific about what her achievements will be in this country. She’s going to become a nurse, and she’s going to fund her son’s way through an Ivy League school so he can become a doctor. Everything she’s doing is that on top of all that. She’s an immigrant from Nigeria. She moved in with her auntie and uncle, and it’s pretty much a focus on her life. After meeting Bob, things begin to move in a different direction.

Billy Gardell plays Bob, and you guys have some great chemistry. Did you know each other at all before filming?

No, we’ve never met before. The first time we met was during the test screening. I’d say we’re kindred souls. We trust each other. There’s a huge amount of trust that exists between he and I and almost everybody in the cast, producers, everyone. I think that’s what you need to create that sort of chemistry and have it reflect in your work.

This is the first time we are seeing a Nigerian family depicted on network television. What kind of feedback are you getting from viewers so far?

People who haven’t been back to Nigeria in a while, like immigrants who are of Asian descent, of African descent, Caribbeans, are like, “Oh my god, this resounds with me so much.” I think it translates across the immigrant experience, not necessarily just the Nigerian experience. I find that people are just so happy to see their story being highlighted in a positive and authentic way.

For people who have not yet watched the series, what would you say to them?

What are you waiting for? This is the beginning of something.

I think every once in a while, there’s a pioneering thing that happens for the first time. This is one of those moments. It’s going to be a part of history. Just watching it means being involved in that. And I think, if I should say so myself, this is why you should watch it.

Bob ♥ Abishola is available now on CBS All Access.