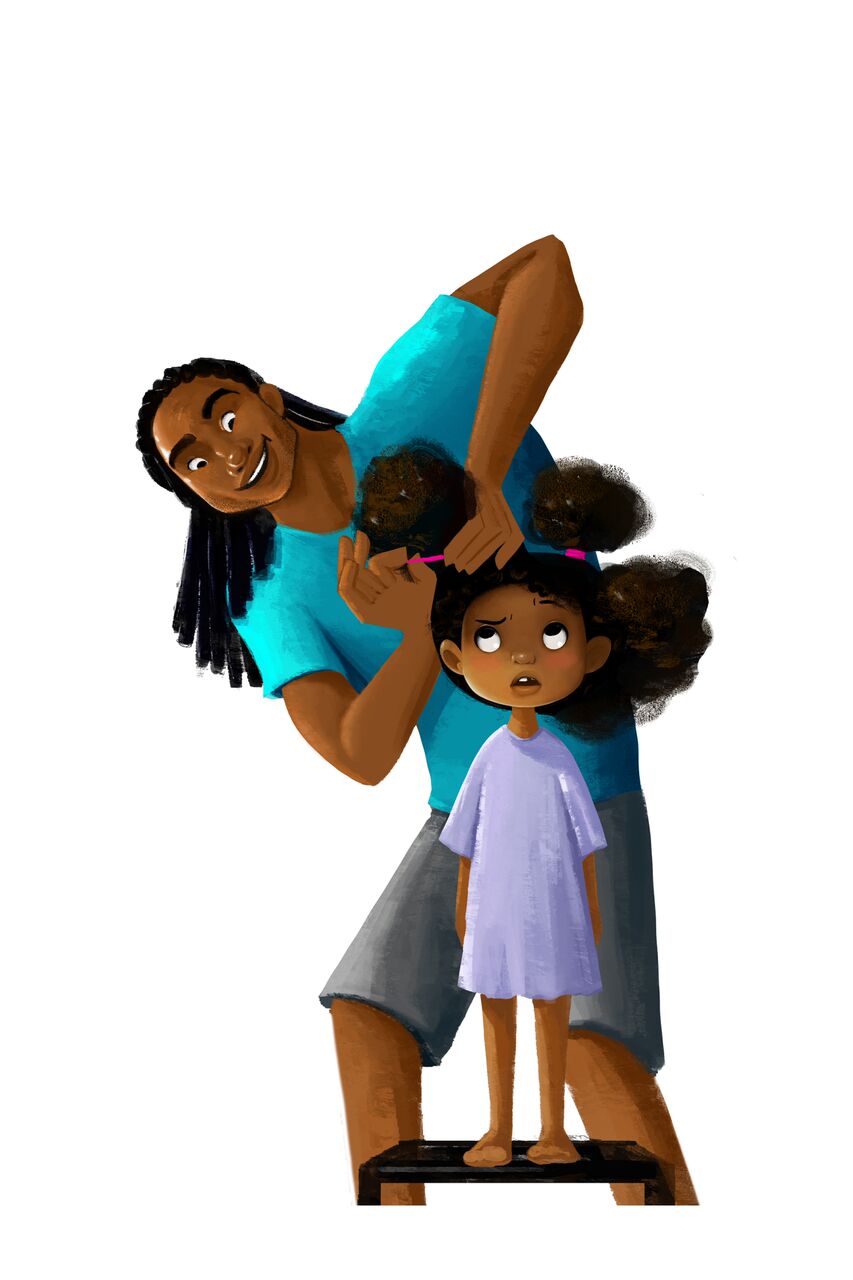 Hair Love, the new passion project by writer and director Matthew A. Cherry (9 Rides, Almost 30), is the story about a father learning how to navigate the ups and downs of his daughter’s natural hair. Matthew got the inspiration for Zuri and her father Steven after seeing a viral video posted by Darrell L Hines II doing his adorable daughter’s hair.

Since the first announcement for Hair Love that Matthew posted on Twitter, I have been fascinated with how much love and anticipation is being shown for the project, so I decided to reach out to him learn more.

Matthew, can you say what led to you choosing a career in the film industry after your retirement from the NFL?
I knew about this program called Streetlights which is a nonprofit that helps PAs get jobs in the business. It was an evolution from being a PA, to directing my first music video, web-series , and shorts, and now I’m trying to get into animation.

What made you choose the medium of animation for Hair Love rather than make a live action film?
I had the idea for the animation for a couple of years. I felt that animation is more of a universal platform, in that they tend to reach the widest audiences. Because they are more family-oriented and have a universal theme, and that no matter the subject, race, sex, age, religion, they appeal to everybody. With the Hair Love project, our leads are African-American, so I felt that it would be a more universal concept if we did it in the animation world.

When you saw the video by Darrell L Hines II, what about it inspired you to create the story of Hair Love?
I think that video was the best example, because in our short film the hair is active and is a character itself. But it wasn’t just that video, it was the whole movement of videos with dads—Black fathers in particular—going viral. Showing dads playing with their kids, showing them how to put on lotion or playing games. These are things all fathers do, but I think because they were Black fathers featured in these videos, people were looking at them almost as though they were outliers or anomalies, thinking “I’m not used to seeing this, so I’m going to share it, it’s different.” My biggest thing is that I want to normalize how fathers, Black fathers, Black men, they tend to be present, even if they aren’t married to the mother, a lot of them are present in their kid’s lives. There was even a study done recently that showed that out of all the racial groups, it is Black men that are the most involved in their kid’s lives.

In your collaboration with Vashti Harrison, how did you decide on the look of Zuri and her father Steven? For example Steven has locs, which requires different methods of maintenance than someone whose hair is in a freer state ?
For me, it was important that Steven had natural hair as well, since I wanted to represent men in the natural hair community too. A lot of times we see “#BlackGirlMagic,” and sometimes Black men and boys get left out of the conversation. I think—particularly in the hair community—little boys get bullied for their hair too. They have to go through their own journey of self-discovery as well. Obviously, it is a little different, it’s not that guys are straightening their hair, but they cut their hair low, instead of letting it grow into an afro, or locs, because they don’t want to be perceived a certain way.
With Steven, it was wanting to have a male with natural hair represented, so I decided that we were going to lean into this super-Black depiction of a Black family. 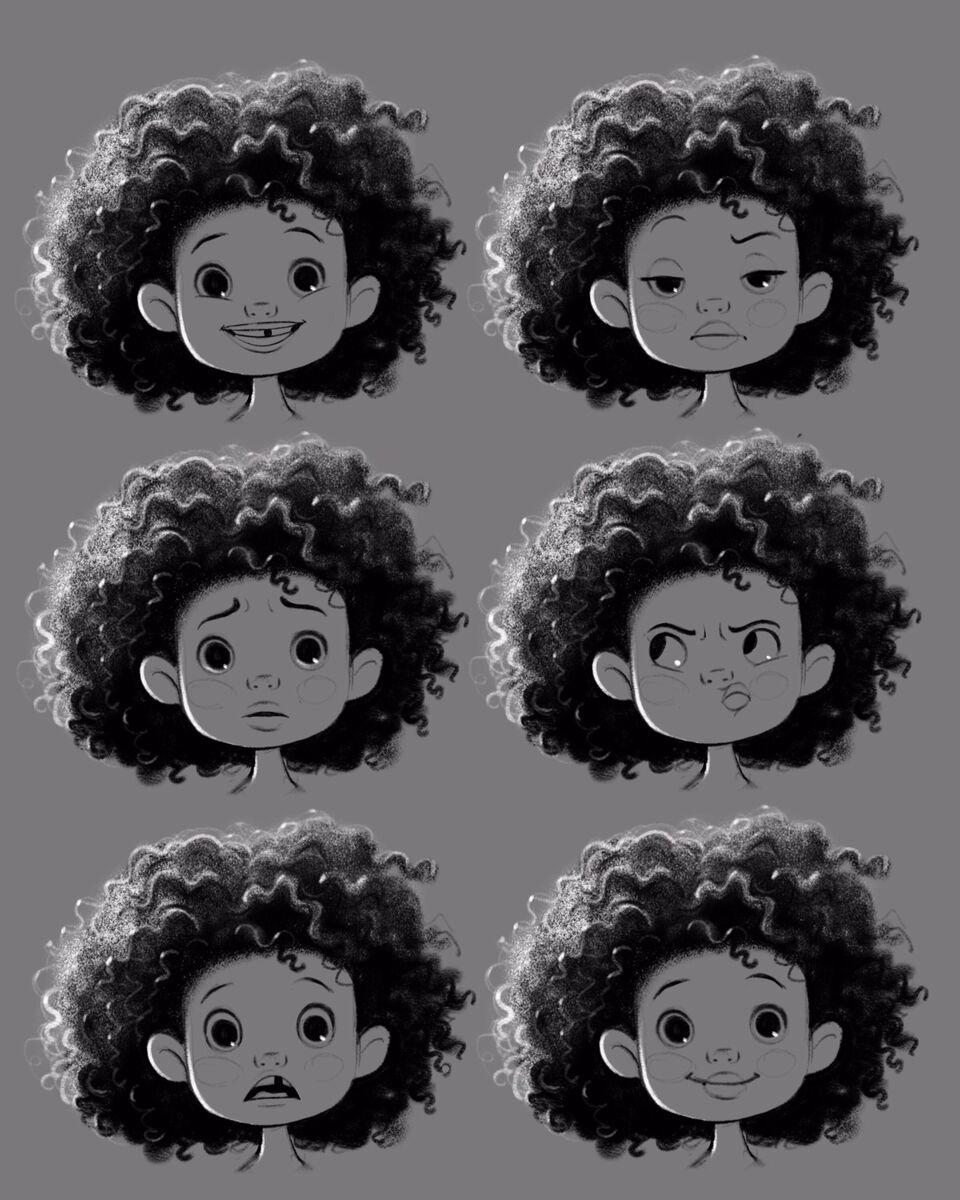 As a young Black woman with natural hair I was excited to see the artist who created the artwork was a woman of color. Was it important to you to have the artist be a woman of color and, if so, why?
I had seen [Vashti’s ]work before, and thought it was great. Upon further research, I found most of her work was centered around young Black girls, and with her being a young Black woman herself it makes a lot of sense. Personally, with my team, I really like to have Black women in the midst. I really value their opinions; half of my agent’s team are Black women, my manager is a Black woman, I think they have good energy, and I really trust their opinions. I thought it was important to have a Black female artist as well, because our main character is a little Black girl.

Are there any children in your life who you feel may be inspired by this story and your involvement in it?
I don’t have children myself, but I don’t think it’s about children being directly related to me. My main reason for doing it is for children who I don’t have a direct relationship with. With the children in my own life, I can interact with them directly. But this film is for the little girl from Michigan; though I may never cross paths with her, she may see this short film in front of a Disney or Pixar film, and see herself represented. It might change the course of her life, she may be going through some stuff, may have self-doubt, being bullied, or she may not be as confident as she should be. For me this is what animation is about, any time you can see yourself represented, especially when you’re young, it can do wonders for the young mind.

Since your initial announcement of Hair Love on Twitter, you’ve gained a massive following, and even started a Kickstarter campaign to raise funds. What has the support you’ve received done for you as a creator?
I highly encourage every content creator that gaining your own following on social media is super crucial, it gives you power. It allows you to grow an audience when you do work. I think the success of the Hair Love Kickstarter is a combination of a lot of things. Obviously what we’re talking about is important, but I also think it is the result of years of just building a presence online, and being a person that others hopefully see as someone who does what he says he’ll do. They know that when I’m doing a Kickstarter the movie will be done, they’ll get their gifts, and they will be of a certain quality.
In the meantime, I’ll just try to entertain and have an opinion and try to help as many people as I can. I think social media is super important, we wouldn’t have the same number of eyes or support for this project if it wasn’t for that.

You are co-directing the film with 3D artist Jason Marino. What has your collaboration been like?
Jason did a short film a couple of years ago called Tamara. I saw the short film on Twitter and, through some research on Google, I found his YouTube page and was able to track him down. It was really important for me to have people around me who worked in animation, as I have never done it before, myself. People such as Jason, Frank Abney (Kung Fu Panda 3) and Peter Ramsey (Rise of The Guardians). They are these great guys, and Peter and Frank are both Black. Jason is Latino, but he really gets Black characters. I just wanted to make sure the team was strong, this was my idea and I wrote the script, but Jason has been through this before and is able to help me avoid any pitfalls and snags we probably would have hit had we not had him involved. I’m just really excited to work with him and the rest of the team.