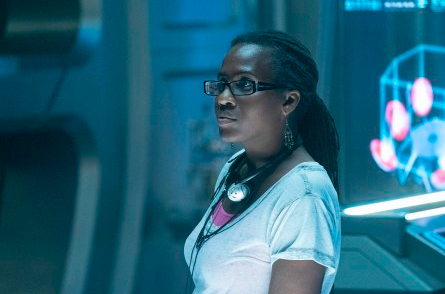 Hanelle Culpepper is boldly going where no Black woman has gone before — the first to direct a series of episodes for the Star Trek franchise in its 53-year history.

Culpepper was at the helm of the first three episodes of the new CBS All Access series Star Trek: Picard which made its debut this past January. She also directed two Star Trek: Discovery episodes, Season 1’s “Vaulting Ambition” and Season 2’s “The Red Angel.” Deadline recently announced that she is set to direct 1000 Miles — the true story of William and Ellen Craft, an enslaved couple who go on a daring thousand-mile escape to freedom from Georgia to Boston by hiding in plain sight with Ellen disguised as a white male slave owner and her husband William passing as her slave.

BGN had the opportunity to sit down in an exclusive one-on-one with the esteemed director to talk about her experiences working on Picard and how she’s changing the landscape by being a woman of color in the industry.

Not only have you directed the first three episodes of Picard, but you are also credited as a co-executive producer of the series. Can you explain to us what that role entails?

Picard is definitely a story that both new viewers and old viewers can appreciate and follow the story, will there be more tie-ins to The Next Generation as the series progresses?

We’re often limited to what we can say about episodes that haven’t aired because we don’t want to spoil anything, but I will just answer that with a yes.

The visuals and set design on this show, just like Discovery, are absolutely stunning and quite frankly look like it cost a fortune to make. How much of what we see is CGI vs. practical effects?

You kind of have to evaluate it. I don’t feel like I can say generally 50/50 or generally at 80/20. Some of it is very clearly CGI. We are moving through the Borg cube, and there’s CGI until there’s a point when we get inside. When I designed the shot, I designed it to somewhat seamlessly move from the CGI to live-action. For most of the scenes 100% when he is in the opening, he is getting his tea, and they’re watching TV. What we do is try to sneak in CGI details in the background to always have the future there but not too much. It’s the kind of details you want people to notice when they’re watching a second time.

It’s Black History Month, and it should be noted that not only you’re the first woman to direct a Star Trek premiere, but the first Black woman to direct one. How does that make you feel reaching that kind of milestone?

The pride I feel is more that they trusted me and not necessarily my color or gender. Hopefully, we’ll get to the point where that won’t matter anymore because they’ll be enough parity. It’s an honor that they trusted me with the franchise. Ultimately because I know that I am essentially standing in for many women directors and Black women directors, I probably put even more pressure on myself to do the very best to try to get an A+ so that I cannot be used as an excuse to not give another woman or another Black woman that opportunity. Hopefully, one day, as I said, it will never matter, it will just be a franchise and doesn’t have to be about gender or ethnicity.

What was it like working with the legendary Sir Patrick Stewart?

He was great to work with. He elevates you. When you’re going to work with Patrick Stewart, you want to come with your A-game right? So you’re prepared all that much more. Whenever you work with someone who is so amazing, it brings you up because you have to at least match their amazing depth. And what was also great about him is that he was still so collaborative and welcomed direction. Sometimes actors know a character so well that they don’t want to hear any kind of direction. But he was open to it and it was very lovely to work with him.

I have to ask, who is your favorite Star Trek captain and why?

The truth is that Picard is my favorite captain. He was the first captain that I tuned in to every week during The Next Generation. His leadership and his ability to connect with his crew in this graceful way, his strong defense of all life, just really appealed and grabbed me. When you’re a person of color, you know how often we are marginalized. [Picard is] a person who believes all people should be treated with respect.

Star Trek: Picard is currently streaming on CBS All Access.