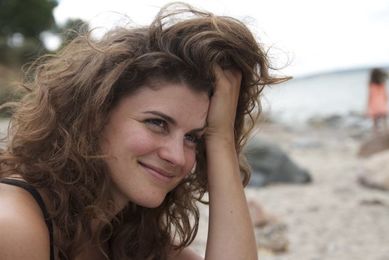 On January 23rd, 2018, The Academy of Motion Picture Arts and Sciences announced that Katja Benrath’s short film Watu Wote: All of Us had been nominated for an Oscar for Best Live Action Short. Katja was also awarded the Student Academy Awards gold medal in the Narrative (International Film Schools) category for Watu Wote, which is a retelling of the bravery and compassion exhibited by a group of travelling Muslims when they protected their fellow passengers on a bus who were threatened with death for being Christian.

Carolyn Hinds: Katja thank you for taking the time to do this interview with me. I really enjoyed the film and, I have to admit, I became emotional in some parts. Before we talk about Watu Wote, can you tell me how you changed careers from a costume tailor, to actor, and now film director? I find that transition very interesting.

Katja Benrath: Thank you for having me. My whole life was always about performing arts…I wanted to have my own theater when I was a child, because I loved everything involved: costumes, acting, singing, directing, decorations…everything. When I had to decide, I was too shy for acting and started to become a costume tailor—I loved every bit of it—but life wanted me to do other things as well. Being a film director and being allowed to be creative and work together with so many departments I am passionate about, feels like a childhood dream come true.

Carolyn: Watu Wote isn’t your first film, and you’ve directed other shorts while you were at the Hamburg Media School. How did you learn about Watue Wote: All of Us, and what made you decide to direct it as your first film based on real life events?

Katja: The school’s director sent me a link to an article from the German news website Spiegel, and then I read a lot about it in the newspapers and on the BBC Website. We (as a team) decided that this is the story we want to tell, we want people to know about. The impact was huge…it was the days before Christmas.

In our world right now—in my opinion—it is necessary to focus on a great goal or good things more or at least as much as on the bad side. If we don’t know where we want to be, we will never reach it. Shining a light on events where people stand up for each other, despite religious beliefs or prejudices, just because the person next to you is a human being, might give us a chance to realize what could be possible.

Carolyn: You’re German and all of your previous films have been in German, and Watu Wote is in Swahili and Somali. What was that experience like, how did you prepare yourself to direct actors and crew who didn’t speak your native tongue?

Katja: Communicating was easy—because everybody speaks English in Kenya. I tried to learn as much as possible and, more importantly, I got to work with the most amazing people. The casting director Lorella A. Jowi worked side by side with me to check if everything was like it should be, and also check if it was as authentic as I wanted it. We worked from the very first moment together with casting, rehearsals and finally the shooting, so we had the same visions and trusted each other a lot.

Carolyn: I have to ask: how did you get Faysal Ahmed, known for his role as Najee opposite Tom Hanks in the film Captain Phillips, for Watu Wote?

Kayja: Since we couldn’t find a lot of Somali actors in Nairobi, our producer Tobias Rosen had the idea to reach out to them, and they really liked the story and supported us immediately.

Carolyn: How did you go about the process of choosing actors, such as your lead? Jua, played by Adelyne Wairimu, in my opinion, gave a great performance.

Katja: She is amazing—she is. We found some great actors. Adelyne Waimiru, our lead actress, was part of a big casting call. She was too young but very fascinating—but since THE best makeup artists in Kenya already were on board (Suki Kibungury and Valery Mdeizi) we decided to work with her and make her older.

We saw some amazing talents. We also went to Eastleigh and talked to people there, they really wanted to support the story, since it is their story. Most of our cast and extras weren’t actors but they invested a lot of themselves and their personal experiences in the movie and I am very grateful for this. It also took a lot of courage to be part of a project with this topic.

We rehearsed a lot and worked on the main parts. The teacher, played by Abdiweli Rakim Faarah, is also not an actor, but was part of the project Fishing Without Nets so he had some [on-set] experience. He did a great job, rehearsing with him and other non-actors was very intense. It is important to help the actors to enter the emotional area of the character, but more important to help them find their way out again.

Carolyn: When you’re directing a film based on true events, especially one that is so emotional and speaks to xenophobia, which can be difficult for some viewers to deal with, how do you find the balance of respecting the history, the individuals who played a part in it, and choosing which parts to tell?

Katja: We talked to a lot of people and heard different perspectives, [and] there are also passengers who are still traumatized and didn’t feel rescued or shielded. Also, there are Muslims who never felt accepted or respected by Christians. The only thing we really wanted to tell is the fact that there was a situation, where people stood up for each other—not thinking of religion, only about the human being next to them. And that it is possible.

This short film is the result of so many conversations during every stage of researching, writing, producing and directing and editing, we really wanted to let everybody be a part of it with their story, life experience or knowledge. We gave our best to do it in a respectful way and we do hope that we didn’t make someone feel bad because of it.

Carolyn: Watu Wote: All of Us has won quite a few awards, including the Student Academy Awards, making it the first Kenyan film to do so. What was your reaction when you found out?

Katja: It was crazy—I was jumping on the street without knowing what I was doing, I think for all of us, including the whole German and Kenyan crew. It was an amazing feeling. Bringing this film finally to Kenya will be the most great feeling thing I could experience, next to working there.

But I can speak for my whole team when I say that we are not making movies for Juries or awards, but for human beings.

And: The Student Academy Award is what it is. A great door opener in several ways. Our short film and the true story behind it will reach way more people now, which is just great. And due to the attention we are getting right now, it seems like our chance to work in this job we love so much is higher now.

Carolyn: What are your next steps as a director? Are you currently working on a new project, will you eventually write your own film?

Katja: I don’t want to give anything away just yet, but I am working on a feature film right now in Germany and planning another one with the same team we had for Watu Wote, and I am starting to work [on] one that also takes place in Africa. This film is very near and dear to my heart and I feel incredibly passionate about telling this story in a way that can hopefully inspire people.

Honey, Kidney Stones, and Zen: A Fun Talk with Brad Bird and the Producers of ‘Incredibles 2’

BGN Interview: Felicia Henderson of BET’s ‘The Quad’ and Marvel’s ‘The Punisher’