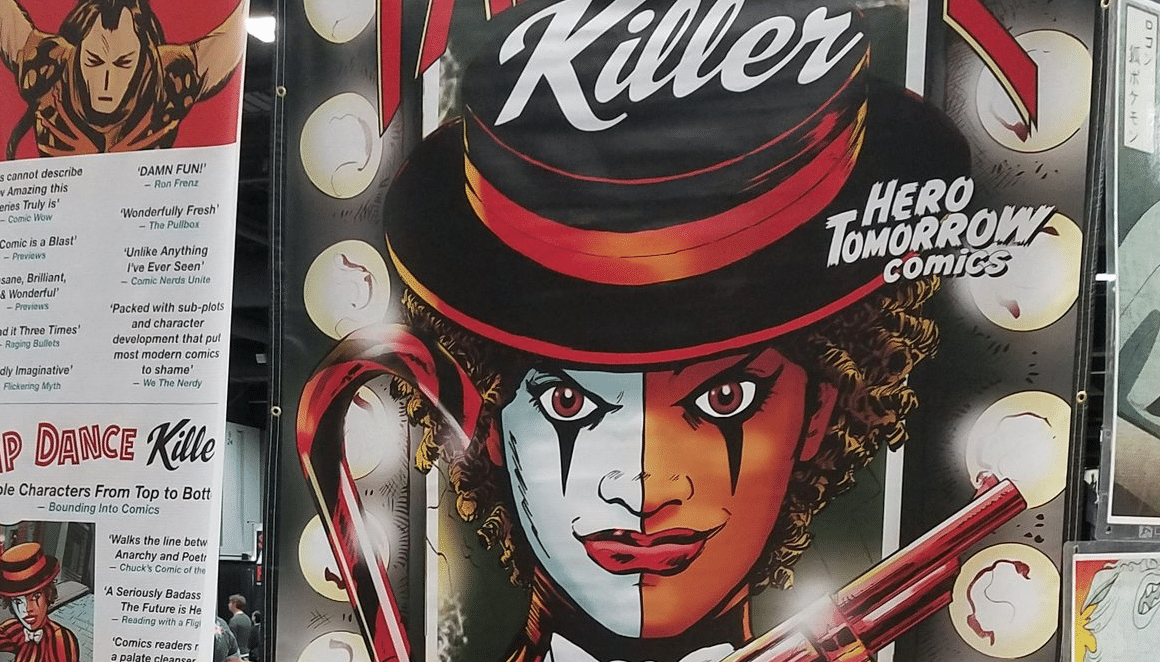 Just over a year ago, Hero Tomorrow Comics released the first issue of Tap Dance Killer.

BGN reviewed the first two issues last year and we have kept in contact with the creator, Ted Sikora, at various conventions.  During Awesomecon 2019, I sat down to talk with Ted about the Tap Dance Killer and the related Kickstarter, which as of this writing was successfully met.

So, last summer we were introduced to Nikki Sinclair and her own title. What has happened to her since then?

She has regrouped with her theater buddies, and they have formed this ridiculous troupe called” The Vaude-Villains,” that is Vincent Reed as Sir Terror and Klaus Marigold as Fletcher and they are trying to overthrow the mafia.

Right, and there’s a sort of supernatural element to Nikki’s transformation. Can you share a little more about that?

Well, that’s part of the mystery that’s unfolding, so, yes, but she does have enhanced strength, she is kind of able to leap over that one wall in issue one, and she can move faster, she also has this ability to kind of read a situation, kind of biorhythms of people and kind of get into their head before they make their move. And that’s one of the things that keeps her alive.

The Vaude-Villain’s nemesis is the Romero family. What is the source of that conflict?

Well, what happened is, in the Apama Series, the three characters were cast in a musical as The Tap Dance Killers are Terror and Fletcher. They get locked into the headspace and because they believe they are the crime power, they immediately go after the actual crime power in Cleveland. The Romeros. So the Romeros have been long-standing in the series, you know, this mafia type organization, and they have no idea what hits them when these Vaude-Villains come at them. I guess the other character I should mention is Drayton Hayes. They recruit this heavyweight boxer to become this murderous clown named Punchline, and they just don’t know what hit them. 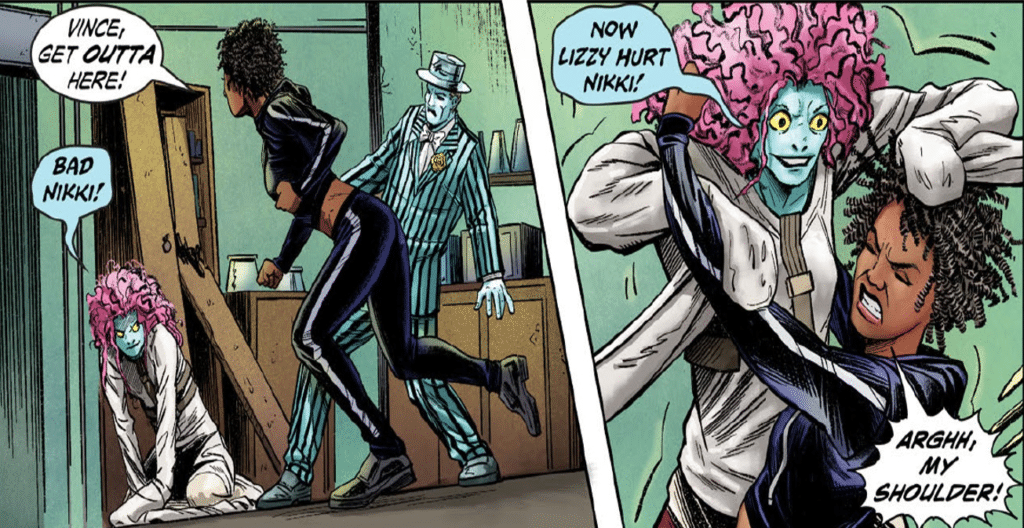 In issue four we see Nikki’s criminal life affect her family. What do you see as Nikki’s biggest regret?

Well, I think she has been up to this point, up to this point she’s been so locked into the mission and the headspace of the character, and she hasn’t had time to really think about the regret. There’s also another incident that happens in issue four that she’s faced with this decision. Is she going to go full-on gangster, or is she going to rescue this innocent life at this scene where there’s about to be an explosion? So, and also Vincent Reed had a near-death experience, so they’re all sort of getting these touches of their past life, and I guess her biggest regret, is at this point still in the character head space, wishing she would have done something to protect her mother. I don’t want to give anything away! Haha, What can I say?

You’ve been making the rounds at different comic conventions. What is the question you get the most often?

You know, a lot of people do ask me, “Why did you decide to make her Black?”, and it’s a question I love. I’m married to a Black woman, and we have a daughter, and it was very important to me that we had a really kick-ass female Black character in our Hero Tomorrow Comics universe.

Why should someone pick up this stuff?

The thing that a lot of people respond to with our book is it is such an easy entry. You’re not trying to catch up with 60 years of history. And it’s coming from people who love Marvel Comics, from the Bronze Age, the seventies, so we kind of did this hybrid of a Bronze Age style with a modern. But you are on board where you know every character from the riff. And that’s an experience you cannot get from Marvel or DC Comics anymore.

And a lot of people tell you in the indie comic field, “don’t do superheroes if you’re doing indie.” But we have found a way to be successful with that. And we found a character, both with Apama, and Nikki Sinclair, Tap Dance Killer, that relate to people, and that really was the model that I think Stan Lee taught us, you know, with creating characters that are relatable, that we see ourselves in them. And it touches my heart when I get young people who come to the table and they see themselves in these characters. And the mothers of some of these daughters that tell me “thank you for making a character of color that my child can see herself in.” And that’s everything.

So there were some accolades that were awarded to the book. Can you tell us a little bit about that?

We recently won a Critical Blast, Best Comic Series of 2018. And actually, we also got Best Writer and Best Artist too.

Where can people come to get Tap Dance Killer or Apama?

Herotomorrow.com and we actually just launched, if I may plug, the Kickstarter where we’re doing the full collection, the first volume of Tap Dance Killer. It will contain issues 1-5 and we have all kinds of rewards where you can get the actual shirt, original artwork, you can have yourself drawn into a story. So there’s a lot of fun rewards, and even though we are distributed nationally, doing comics is so expensive. When we go to do this pressing it’s going to be like 8,000 dollars right up front. So it’s really helpful to do a presale directly to the reader, and it keeps us close to them, and we love that. We give you more value than if you bought it in a store anyway.

It is interesting to watch an artist labor over his creation, to nurture and develop it.  When you talk to Ted Sikora, his passion for this project is clear. In one form or another, he has been nurturing the character of Nikki St. Clair and developing her story for over a decade.

After our interview, Ted let BGN know that the first stretch goal was met and anyone who selects a reward of $15 or more will now also get a copy of the brand new Tap Dance Killer song sung by CoCo Smith on mp3.  So if you haven’t already, go to your local comic shop and pick up a copy of Tap Dance Killer or Apama at the Hero Tomorrow Comics website, donate through the Kickstarter, or stop by your local comic shop.  Issue 4 was released in April.

E.Angel is an engineer and holds a BS in electrical engineering from North Carolina A&T State University.  In her spare time she works at her comic book store – Brainstorm Comics and Gaming – when she is not writing.  She’s a real nerd who loves all things Star Wars and Star Trek, and is an avid gamer. E.Angel can be reached at e9of10@gmail.com or on either game platform as Bunnehs Sister.