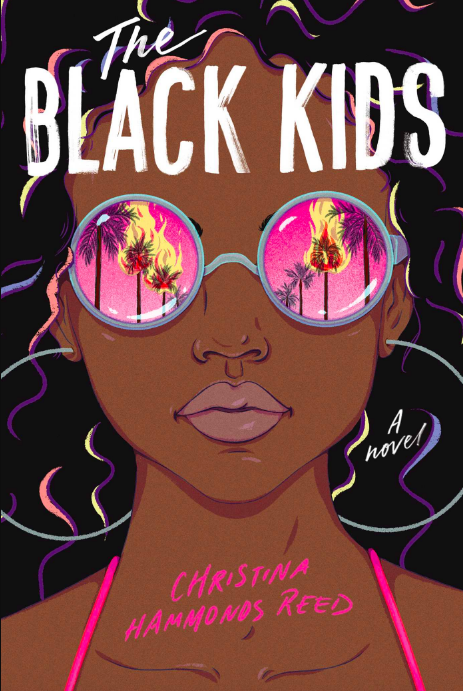 Let’s talk about the intersections of race and class. Timely, right?

The Black Kids is a coming-of-age story about a wealthy Black teen navigating friends and family during the height of the Rodney King riots. Ashley Bennett lives a life of uncontested privilege — fancy private school education, big house in the ritzy part of Los Angeles, live-in help to take care of her. She’s got it made. But no amount of socioeconomic leveling up can erase the realities of her brown skin, especially within a sea of blonde white chicks whose idea of “struggle” is deciding whose swimming pool to lounge in.

This book resonates with so many little truths about what it’s like to be the only Black girl in the room, raised to be “respectable,” and harboring the feeling of injustice before you even learn to identify where it came from or what it means.

Black Girl Nerds was fortunate to have an email dialogue with author Christina Hammonds Reed about her thoughts regarding the past, present, and future of these issues and how they relate to both her story and our current cultural climate.

Class and socioeconomic status play a significant role in Ashley’s development. Can you talk a bit about your desire to highlight her family’s relationship to race and wealth?

I wanted to examine and dismantle respectability politics and this idea that if you just kept your head down and did the right thing, did well in school, moved to the right neighborhoods, dressed a certain way, spoke a certain way, if you lived as “one of the good ones,” that somehow you would be [insulated] from some of systemic and institutional racism that this country is literally built upon. There’s this argument that, “Oh, it’s not about race anymore, it’s about class,” and it’s absolutely false. The reality is that even those of us who grow up with some degree of relative privilege are still existing as Black bodies in a country that devalues and denigrates those bodies regardless of economic circumstance. We’re still subject to the same forces that prevent Black and Brown people from participating equally in the American Dream, and we’re still coming from that place of intergenerational trauma that stems from this country’s heinous legacy of slavery and virulent racism.

Through Ashley’s parents we see the idea, or perhaps vain hope, that there is a socioeconomic ladder leading away from racism and its ramifications. Do you think that attitude still exists within Black communities today? How do you feel about it?

I think younger generations are rebelling that much more against the idea. There have always been people who have argued against it. I personally reject the “we are not our grandparents” narrative. Our grandparents were strong as hell, and the neutered history we’re taught in school doesn’t capture the strength and drive and fight they had on all fronts — as well as the fact that they weren’t a monolith in terms of how they thought it was best to fight for progress. So much of what they had to do was to simply stay alive in the face of racist violence. That said, I think young people today are definitely rejecting the idea of assimilation and centering of white opinion as something you need to factor into how to present yourself to succeed. We’re more able to do so, because of our parents’ and grandparents’ legacy. We’ve been bombarded with images of successful Black men and women trying to get into their workplaces, or homes, or just minding their own damn business and having people assume that they were a threat, that they didn’t belong. So, I think younger people are like, “Why even bother trying to make ‘them’ feel comfortable with me? I should just be comfortable with me and do my best to thrive and fight on my own terms.” We’re so tired of having to do everything right just to be seen as human, and even after all that, we still aren’t.

I think different generations have had to evolve different defense mechanisms to survive in this country. The progress that has been made has been as a result of our parents and grandparents and great grandparents struggles for equality. We’re able to fight in the ways that we do currently, because they fought in the ways that they did. I do also think that we’re not a monolith, so while some of our parents and grandparents may be saying, “Burn it down,” others may be saying, “Why are they looting?! They’re setting back progress!”

That said, I do think younger people now are more likely to have college degrees than their grandparents did, are more likely to be professionals than their grandparents were, and are seeing that even with all those individual credentials and all that achievement that many of their grandparents fought for access to, and could only have dreamed of, they’re still subject to the same racist systems that deny us progress as a collective. And I think younger non-Black people are more readily acknowledging this and wanting to be a part of the change than previous generations of non-Black people. It’s a new generation coming into its power and demanding change.

You mentioned that you spent a lot of time re-living the events of the LA riots in order to complete this story. What was the hardest part of that process?

I was very young, so my memories of riots are somewhat limited. That said, I dug deep into the feeling of not fully understanding the pain and anger of people who looked like me on the screen because I was at a slight remove from it, and Ashley’s definitely exploring that in her own much more mature way throughout The Black Kids. The hardest part of researching all of the events leading up to and including the riots for me was just how little things have changed. We’re still grappling with all of the same issues. While progress has been made, it’s not nearly enough. So many Black and Brown people have died needlessly at the hands of police since, and that’s a tough pill to swallow.

Did any major events influence your creative decisions as you were writing?

The deaths of Trayvon and Tamir and Sandra and Michael and so many Black people whose deaths we’ve witnessed because of the technological shift that’s enabled their deaths to be filmed and broadcast. Also, the election of Donald Trump brought a fresh anger and frustration that I absolutely channeled into [Ashley’s sister] Jo.

Were there any figures or activists who you drew inspiration from for your characters?

I hope that in my writing I’ve honored all of them. There was not one person in particular, but the men and women who’ve fought for change are always at the forefront of my mind. Perhaps a little bit of the initial split between Malcolm and Martin is something I was thinking of in terms of writing the sisters and their parents? But that split is itself a false, overly simplistic narrative. As both Martin and Malcolm grew as people, and as the movement evolved, they respected each other and had far more in common than not.

For young Black kids who are growing up through these times, what’s something you hope they remember?

I hope they remember the hope and the love. These fights have always been driven by the love of our people even in the face of this immeasurable struggle and a continued hope for a better life for all of us. I hope they remember how many people came out to protest and the beauty of seeing people not just nationwide but worldwide stand in solidarity with Black people.

The Black Kids is available now wherever books are sold.