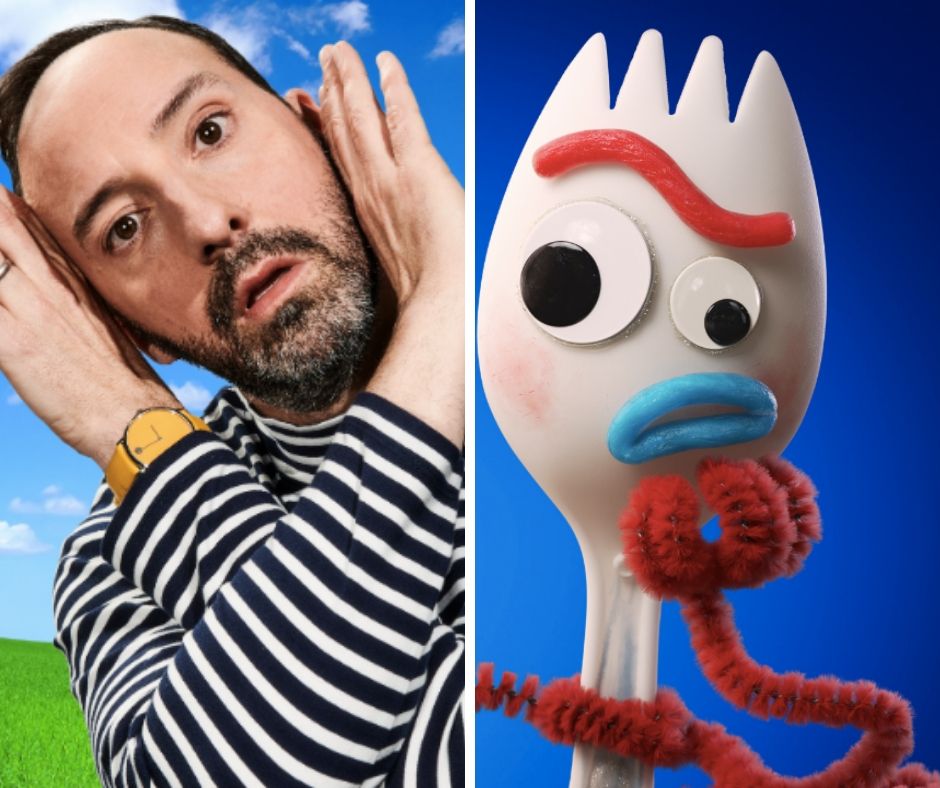 In case you aren’t aware, Disney is launching its very own streaming service on November 12 titled Disney+.

It will house all Disney content new and old in one central location. During the latest press launch, BGN got a chance to see a few episodes of the upcoming new short series, Forky Asks a Question. We also got to talk with the hilarious Tony Hale, who voices Forky.

It’s no surprise that Forky is headlining a new show on Disney+. He was a hit with kids and adults alike in his debut performance in Toy Story 4. The little plastic spork with pipe-cleaner arms and popsicle-stick feet is being made by children all over the world. Even Hale said he has made a Forky with some elementary school kids in Toronto. Forky is a fun contrast to the toys we know and love, like Woody and Buzz, and is the perfect character for this new show.

Forky Asks a Question is all about the craft project made from trash and all the questions he has about the world he now finds himself living in. He asks important questions like, “What is love? What is time?” And of course, the deepest question of all, “What is cheese?” (as Disney would have it). The fun thing about it is that kids will listen and learn new things from Forky because he comes with such a childlike personality. The episodes are literally three minutes long, so they are basically equal to a child’s attention span and just long enough for an adult to be distracted for a moment. The show is very charming.

Tony Hale was more than eager to find himself part of the Disney+ line up with Forky. “Pixar in general is such a creative playground,” he says, “but going into the film I saw the character and I was like, ‘Wow, that’s not what I expected.’ He’s so simply made, and he sees the world so simply.” Forky is the perfect character for television right now. Disney is known for producing fantastical positivity amidst the real negative. Hale said it best when he commented on how unbalanced the world is right now and why Forky is just the right person for the job.

“You know, the world is so chaotic,” he starts, “and there’s so much going on that having a character stand up and go, ‘What’s happening? What’s going on?’ — asking very simple questions, bringing it back to basics — it resonates with a lot of people.” The questions asked are done so beautifully; it’s a very funny script, even for adults. Hale talks about the very first episode title, “What Is Money?” “It’s very silly,” he says, “but then it has this sweet moment, in the end, talking about how it’s not about money, it’s about connection and friendship. Pixar is like art unfolding in front of you, and it’s just so beautifully done.”

Forky’s relationships with the other Toy Story characters is so genuine and pure that it is easy to imagine seeing different characters try to help Forky understand the answers to his questions. “They’re always just trying to be rational with him. Like, ‘No, Forky, it’s this, it’s that.’ He’s like, ‘Why?’” It’s very endearing. Forky is that hint of annoying but still cute, and you can see that come across with the rest of the toys. “The surprise is when you think it’s going one direction, and then, in the end, Forky almost has this philosopher in him,” says Hale. “You think it’s just quirky-funny and he’s like, ‘Nope, it’s not about money, it’s about, friends. Isn’t that right?’ and Ham is like, ‘Yeah, that’s right. That’s really smart, Forky.’ So he always gives this philosophical turn in the end.”

Forky Asks a Question is one of those shows that you just can’t help but love. “Forky is kind of a breath of fresh air where it’s nice to have his continued presence,” says Hale. It’s the simplicity we all crave, especially as an adult. “I think we’re missing that in our world today,” says Hale.

This show will no doubt continue the Toy Story legacy that highlights these wonderful characters. These toys are a group that goes through their own adventures and misfortunes, but they find a way to save each other each time. Forky has become family, and in return, they showcase patience and love, no matter how silly they think his questions are. Hale had a similar reflection. “To me it’s that real power of community. We’re not supposed to do this life alone; we’re supposed to do it with each other. They’ve always had each other’s backs, and we need to do that.” Hale continues by stating that we are always searching for independence and how powerful that can be. But what’s on the other side of that? “What’s wrong,” he starts, “with healthy dependence? What’s wrong with a group that really, in a healthy way, cares for each other and takes care of each other? That’s what we want to see. We want to see that journey.”

Forky will be teaching all of us soon — making us consider what it’s like to care and ask questions and not be judgmental about it. Yes, it’s a cartoon, but like all stories, there is an underlying purpose and necessity that needs to be broadcast to people. The first episode, “What Is Money?” will premiere on Disney+ on November 12.