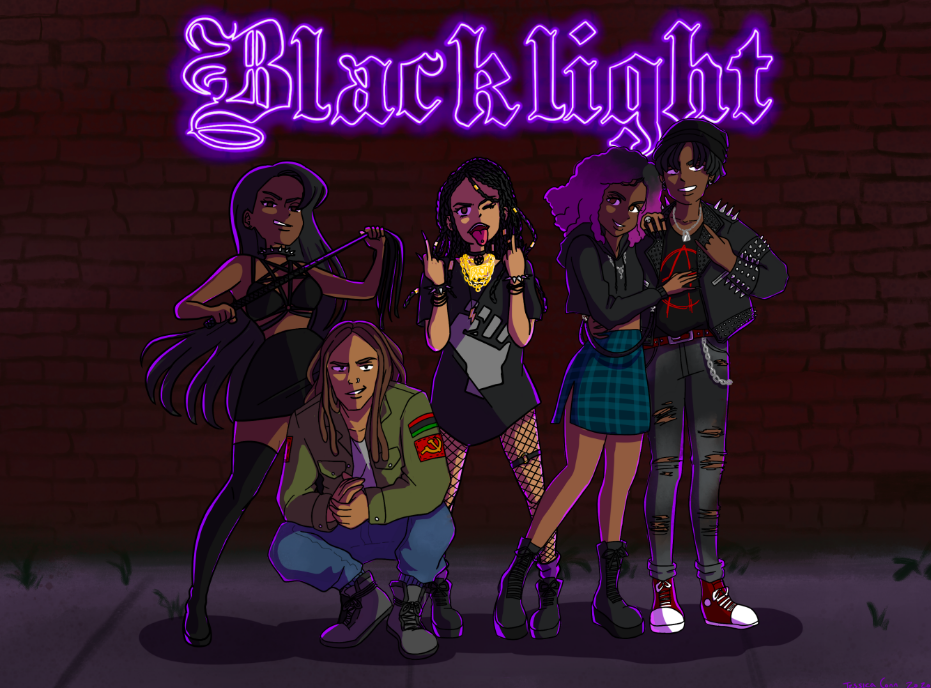 Blacklight is a series about a young Black goth activist who after grappling with her toxic nonprofit work environment, turns to sex work in post-Katrina New Orleans. BGN had the opportunity to interview the creator of the series Maha Chielo.

You’re making a series that is centered on socialist values while under a film industry with capitalist roots. Can you talk about making art for social change while dealing with these barriers?

It’s definitely difficult. We are still in the process of trying to move it forward. I think it’s very much a matter of us, me and [co-creator, Michelle Zei], trying to keep as much creative control as possible.

We had been taking meetings before March 2020. But once the pandemic happened, that’s when we came up with, “Let’s try to do a table read!”

The more representation Black people tend to get, the more likely the lead has lighter skin. How are you navigating representation while also making sure that your story is represented?

I try to be mindful of the way things are presented. Obviously I’m speaking mainly on my own experience [as a light-skinned Black person]. I [also try to think of] the experiences of people I have worked with.

Racism and sexism in the industry is something I have experienced a lot. I’m not going to leave out other nuances to the experience: colorism, [fat-phobia], being cis versus trans in the sex industry. Stripping is mostly legal, which puts trans sex workers at a disadvantage having to work more in online or street-based sex work, which is either illegal or in a legal gray area.

On Blacklight’s Twitter and social media, there was an acknowledgement of flaws with the film Hustlers. P-Valley had a lot of research done before putting on the show. In the show Pose, a lot of the collaborators do not have a history of sex work, but Janet Mock has. I would love to hear your perspectives on those shows.

P-Valley I have seen the pilot of. To be honest I don’t particularly care for it. The research was mainly visiting clubs and talking to people there. I don’t feel that’s appropriate to come to people’s job and ask them questions, especially when they have to work as an entertainer and they have to keep their mood and headspace in a certain way.

Like, are they acknowledged during the making of this? Are they labeled in the credits? Are they getting compensated after [the show airs]?

Yeah! I just feel if I’m looking to speak with someone who is in the industry, I would just contact an organization and have them put me in touch with someone. I’d compensate them and let them know what’s coming into the meeting so that they’re in the headspace for being asked questions.

Dangerous storylines like Euphoria has a character [Kat, played by Barbie Ferreira] who gets into [online] sex work, which I feel is wildly irresponsible. This is post-FOSTA SESTA, which is a huge blow to sex work and to online censorship in general.

Pretty much on all sites now, you need to show a government ID to get approved. It’s already a barrier for some people to get IDs.

It is irresponsible to portray all men who go to sex workers as bumbling idiots? They’re gonna be finessed by this little girl? I think it paints customers as not people with their own agendas [and paints sex workers as scammers].

I really appreciate how in your series, Brianna says “Okay, I have this really crappy job. How am I gonna make money?” It’s viewed as a very practical entry point for herself. Even the clients are very much humanized.

I think that’s what happens when you write from experience![Laughs.]

When I think about sex work, there’s a lot of sex work activism right now for example, and [its alignment] to working class solidarity and activism. So I want to think more in that space instead of a “female empowerment, sexuality” sort of space.

Are there any positive portrayals that have inspired your work? Or are there influences to the work you do in Blacklight that inspired you to write its script?

I don’t have any particular inspirations when writing about sex work. I tend to think about my own experiences to get that. I’m not saying that every portrayal of sex work is always horrible.

A trope that happens a lot in media regarding sex work is that when a person joins sex work, it’s like an Alice in Wonderland kind of thing, but in a sinister way. A “good normal person” goes into the industry [and then] is corrupted.

What else do you hope for future episodes that you haven’t named yet?

Sex work is a vast place of very bizarre things. [Laughs.] I want to show all the funny and weird stuff that happens in the industry. I also want to show more complex female characters with complex dynamics between their relationships with other women, not just with men.

I also want to include queer experiences in sex work because I don’t see this a lot. Sex work isn’t a sexuality. It’s just a job. Many queer women do sex work where the clients are male. Some sex workers are non-binary and perform femininity just for work. Some women present more masculine outside of work.

I want to cover post-Katrina revitalization and gentrification; nonprofits and all of the toxic things that happen inside of [those spaces]. I really want to touch on activist spaces, which I never really seen highlighted in any shows before. Once you get Black church people, Black communists, Black people who were radicalized in prison, people who want to be inclusive of [people’s pronouns], people who can be very patriarchal, it can get very chaotic very quickly. Everyone’s not joining from the same starting point.

This is the first time I have ever seen one of those activist f***boys represented in a show!

Right! And it’s very confusing when you’re a woman navigating those types of spaces. You think you’re making a connection with someone who shares with you these radical, less common beliefs. Then it gets very confusing when that relationship can go awry [because this man is a] definite womanizer, but also considers himself a feminist.

I don’t see any Black alternative representation anywhere! In any kind of media. Black goths, Black emo kids, Black punks — these are not common representations. And when they are represented, they’re often tokenized or they can only be friends with white people, which I really don’t think is that true. They will be fine! They can be friends with Black people as well.

Be sure to follow Blacklight on Twitter for updates and watch the table read of the pilot for yourself right here!