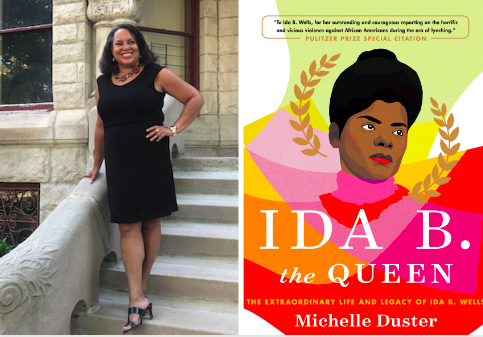 BGN was honored to meet on Zoom with Michelle Duster, author of the new biography, Ida B. The Queen: The Extraordinary Life and Legacy of Ida B. Wells to talk about the relevance of her great-grandmother’s work today.

Tell me about your process for writing the book.

I’ve been working on projects and other writings about Ida for several decades. So basically I committed about 30 years of research in different ways that I’ve collected in order to write this book. I read through almost all of the biographies that are already published to see what information is most common and dug deeper into aspects of her life that weren’t mentioned so much. I wanted to write from a slightly different angle than what already exists.

What intrigued you the most when you were researching your ancestor’s story?

Well, how she was investigated by the FBI. That was just my personal fascination, so I thought I would start the book that way. I thought it would be dramatic. Somebody’s knocking at the door demanding to know who this Black woman is and threatening her with treason. I thought the FBI investigation encapsulated her personality. She refused to be intimidated at all by the FBI.

Another key story that stayed with me was her lawsuit against The Chesapeake, Ohio and Southwestern Railroad Company in 1884. Why did you pick this specific story to be in the book?

It was one of the major turning points in Ida’s life. Most people have moments that shape their idea of the world and make an impact on career path and passion. I think perhaps without that incident on the train, her life may have gone another direction. But because she had that incident, she was so humiliated and angry that she decided to actually speak up for herself and take on this massive railroad company because she thought it was an absolute open and shut case. I actually read the entire court transcript. Reading the actual testimony from witnesses who were present was fascinating; they describe everything. It was very clear that the train cars were separate and unequal. There was no doubt about it.

Ida won her case, but it was overturned when appealed in the Tennessee Supreme Court. Ida even mentions in her autobiography that the courts couldn’t allow her case to win because that would have set precedent for people to sue the railroad company and ultimately win. They just couldn’t have that. So, it was just a bogus overturn on the part of the Tennessee Supreme Court. We see similar cases happen today. Like this most recent impeachment trial. You know, the evidence is absolutely overwhelming, you cannot dispute what happened, but then they try to come up with these ways to justify not convicting, where laws do not apply to them. It’s like this David and Goliath kind of dynamic where Goliath just crushes David.

I’m sure my great-grandmother knew she was fighting this huge battle, but the fact that she decided to do it anyway and she won at first shows that she was right that she could get justice. Two and a half years later it was overturned, so that really did make an impact on her life as far as thinking that there really was no way to get justice through the legal system.

But legal challenges didn’t stop your great-grandmother. How did the lynching of her friends Thomas Moss, Calvin McDowell, and Henry Stewart, the owners of the People’s Grocery Company in Memphis, Tennessee, impact her life’s mission?

Those vicious murders changed the entire trajectory of her life. The day Ida’s friends were lynched, she wasn’t even in town. She was in Vicksburg, Mississippi, selling subscriptions for her newspaper. She made it clear that she loved working as a journalist for the newspaper and was excited about growing her business. She would go to meetings, give her pitch, and leave with handfuls of subscriptions. Her talent for writing and tenacity had grown the newspaper, and she had taken on partial ownership. You could guess that if she hadn’t experienced that specific tragedy in her life, she might have just continued growing the newspaper and being more in the business world. But when she learned about what happened with her friends, she decided to use her voice in the newspaper to expose the level of violence that was being inflicted on the Black community. At the time, it was extremely rare for lynching to take place in a major city. That made it unusual and extra horrifying. There are multiple layers that opened Ida’s eyes and made her realize that there is no justice. There is no way that Black people can ever get equal treatment in this country. So it made her think about advocating for using financial power within the Black community to stand up for ourselves and at least make our presence known.

We aren’t taught to even think of “collective action” among Black people with resources during this time period.

Exactly. Ida was one of the co-founders of the NAACP, and the first Black millionaire Madame CJ Walker was also philanthropist who helped fund some of the NAACP’s anti-lynching initiatives thanks to Ida’s ant-lynching activism.

The nuances you reveal about Ida, the facts that she loved fashion, was an entrepreneur, and courageously spoke truth to power, humanize her. What inspiration do you hope Black women will receive from this biography?

My great-grandmother’s lifespan was from the Civil War to the Great Depression, which was a time of enormous change in our country. And she was right front and center of all of the struggles to advance from enslavement, to women having the right to vote, to Black people as citizens. Really, the fight is for full citizenship. To be full 100% first-class citizens instead of “accepted” second-class citizenship.

So my goal and hope is that particularly young Black women will see that their voices are important. They deserve the best and need to fight for full citizenship using several strategies. Speak up using journalism. Use your collective financial power when it comes to boycotts and implementing outside pressure to make a difference on systems. I hope that Black women will see the 400-year continuum of Black resistance against backlash as well as progress. We’ve been fighting since we’ve been here. We’ve never been passive about being oppressed.

I include modern activists in the book to show that what we are doing is a continuation. We are all in this together, and the past is connected to the future. It’s not ancient history. Our ancestors were doing what we are doing, now just in a slightly different way.

Ida B. The Queen: The Extraordinary Life and Legacy of Ida B. Wells by Michelle Duster. Published by Simon & Schuster. Please go to www.indie bound.org or bookshop.org to find a Black-owned bookstore near you.