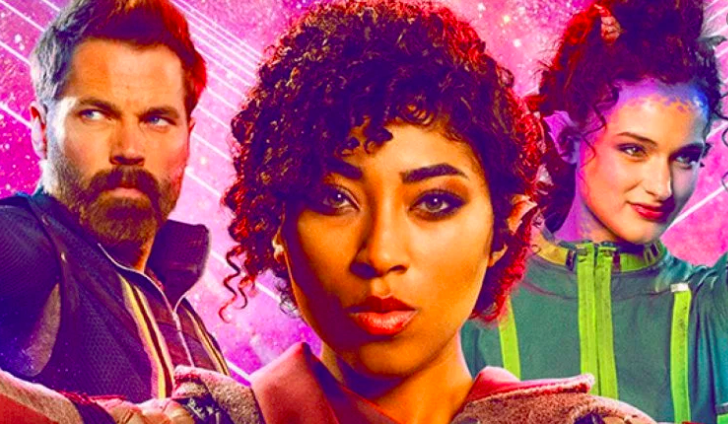 Self-isolation can sometimes bring to the forefront feelings that can include vexation, desolation, occasional glimpses of optimism, and surges of sorrow.

There are only a few reliable things to help me get out of this mood, among them watching sci-fi shows, interviewing celebrities, and writing about both. What better time than now to get to know the star of the neon sci-fi show Vagrant Queen, the latest science fiction show on the SYFY network. In a Zoom interview with BGN, star Adriyan Rae dishes about her intimate life, her acting, and commonalities with her character.

For anyone who ever gets the chance to speak with Adriyan Rae, one thing is for certain. She is chill, nerdy, and funny AF! Adriyan Rae began the interview by letting down her thick braids that somehow managed to fall onto her taffy pink tank top. She slowly steeped her tea bag, took a sip, and I prepared myself for all the tea that was about to be spilled.

“You are the star of Vagrant Queen,” I asked, “which is a comedy adventure show. Are you funny in real life?”

Rae took one sip of her tea, giggled, and with a hand gesture across the screen she said, “Oh, I’m hilarious — period!” Rae’s comedy is completely different. Take one look at her Instagram, and you can tell just how extraordinarily comedic she is. How does this compare to her character? Her response: “Elida’s comedy is situational and mine’s not.”

One of the most interesting aspects of any celebrity is the artwork they keep. “The most interesting thing in my home, other than me?” she said in response to my question. “I would say it is this piece of art. It’s a painting of my backside.” This lovely painting is tasteful, yet provocative. Thank goodness for video distance interviewing.

Rae is trained to spot the slightest nuances in her character from the script. She knew that her character Elida was no ordinary walker. Rae being so obviously detail-oriented established, she created a specific walk for her character in the show. “When I was little, I tried to walk like my dad,” she said. “I had this tomboy walk growing up.” This is just one aspect of a handful of things she has in common with her character, along with being loyal, a hard-core badass, and having a lot of heart. “Elida has this self-journey of finding herself and her voice.” In this regard, she tracks exactly with what Rae is doing in her personal life and in her career as an artist. She wants to find what she really wants to do as opposed to what Hollywood will give her.

When her co-star Tim Rozon, was asked about his views on Rae, he only have the most positive things to say: “She’s badass.” If she ever sweats her scenes you would never know. She is so amazing at everything she does, and she brings this character to life with her incredible talents.

Of all the things Vagrant Queen is admired for, apart from its LGBT relationships, is its Black female lead. This has earned some of its most unconditional ardent feedback possible.  Early on many viewers might have believed this powerful trio shares the spotlight equally; however, this changes as the narrative unfolds. Elida becomes ever more important to the narrative.

While it might not be explicitly clear if the intent behind the show was to empower more nerdy Black girls, it is clear that this is Rea’s message. An important question that is always on my mind is, who does the actor believe will fall in love with their character? As Rae took another sip of her tea, she grinned and answered, “Little Black girls.” This was a remarkably moving comment. While many other shows have strong male and female characters, this one has a little something for more Black and queer individuals. Rae added, “But also this is for anyone who has been through a tremendous struggle, and has had tremendous loss, and roots for the underdog. It’s very easy to fall in love with Elida if you have obstacles to overcome.” Rae works to capture the character, but also to create a more inclusive community in the science fiction world.

Rae explained further what her role means. “This role helps to kick down doors, breaks glass ceilings in the science fiction world, because we have been so sparse and limited. Even though this is not the biggest role in the world, I’m still kicking down the doors and holding it open for others.”

Some of the best things in life occur out of your comfort zone. This was true for Rae when she first got into acting. As she put it, “I just divinely fell into acting. I did a music video and I had to act. I told them I didn’t know how to do that. They told me to try it, I was, after all, in Black Hollywood [Atlanta]. I tried it and I fell in love with acting.” It wasn’t guaranteed that she would be a star, but she is slowly becoming one.

With a great personality, creative answers, and teeth so bright and white my transition lenses were getting darker, she ends on a high note. Her tea was finished, and she needed a refill. One thing is for sure, she is on the rise, and I can’t wait to see what else she will produce.