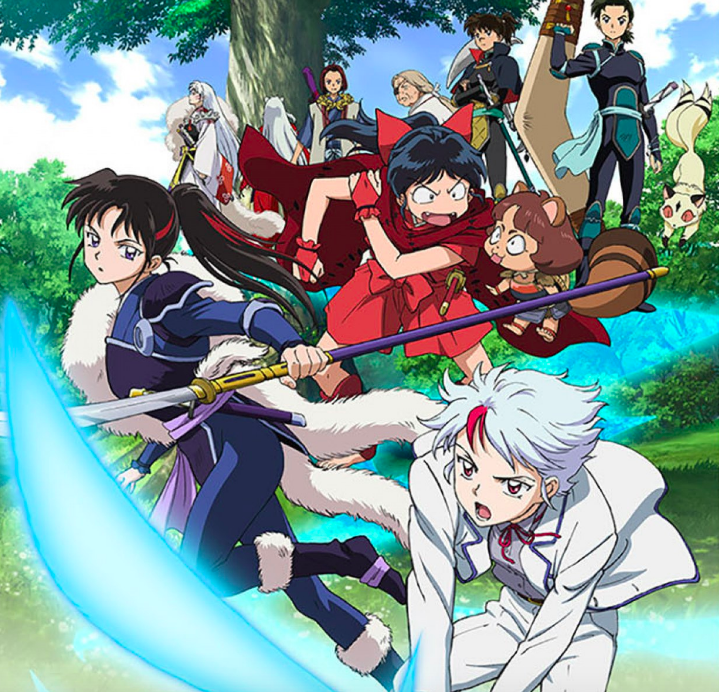 Last year, many Inuyasha fans rejoiced when Yashahime: Princess Half-Demon, the sequel series that follows behind the original anime series, was finally released.

However, many in the fandom were skeptical, as sequel series don’t quite always live up to the original.  With sequels like Boruto: Naruto Next Generations and other anime sequels to shows from the 1990s era emerging, older school fandoms aren’t being left behind.

Inuyasha was first written and illustrated by Rumiko Takahashi as a manga and published by Shogakukan’s Weekly Shonen in 1996. In 2000, it was adapted into an anime series by Sunrise.

Viz Media licensed the manga and anime series for the United States and before long, Inuyasha was a staple in the anime fandom community. Most fans flocked to new episodes when they aired on Cartoon Network’s Adult Swim, which was once the main hub for many anime shows.

Loved for its mythical feudal era fantasy, humor, and demon action, fans were quickly hooked. They were also satisfied with the level of adventure and even some very touching romance throughout.

Basically, there wasn’t a theme that the show didn’t take on while still being a cathartic watch for many.

So, when Yashahime: Princess Half-Demon aired in October 2020 from Viz Media, it undoubtedly had some big shoes to fill.

Set decades after the original Inuyasha series, the sequel focuses on the daughters of Inuyasha and Sesshomaru. Immediately, this premise begs the question of whether such a continuation will be satisfactory for fans. The ending of the Inuyasha series did leave many questions, like: What happened to Sesshomaru and Rin? What happened to Inuyasha and Kagome, and each character’s families? With so many questions floating around, a sequel series seems like the perfect way to quench that age-old fandom thirst. Yet, it also has the risk of being a story that goes on too long, and, well, becomes extremely devalued and even ruins its predecessor.

For those feeling unsure on whether to take the plunge and tune into this show, there are some important things to note that may make the choice clear.

Without further ado, it’s time to jump into the Bone Eater’s Well and enjoy some feudal era fun!

The good news for fans is that this sequel is also made by Sunrise, so there are no significant shifts in animation or art style.

The characters are still silly with the occasional serious moments. Towa Higurashi and Setsuna are Sesshomaru’s twin daughters and Moroha is Inuyasha and Kagome’s daughter. Moroha is very playful and childish, Towa ranges from innocent to stern, and Setsuna is very stoic and a bit cold (like her father).

The show does little to ruin the original series in terms of character portrayal and episode quality. It’s definitely watered down compared to the original series. It’s fast paced, and full of many, er, random side stories and rants, not unlike the classic Inuyasha.

If viewers are eager to find out what happened to Kohaku, Lady Kaede (yes, she’s still alive), Myoga, and a few other familiar faces, this is the chance.

With other 2020 releases, like Season 4 of Attack on Titan, this sequel is likely best to place at the end of your list. It’s not bad and is very binge-watch friendly, but it’s nothing special.

The emotional investment and appeal of this series isn’t anything compared to the Inuyasha series, and even without being weighed by comparison, it’s still a very basic anime.

When it comes to overall quality, it’s not exceptional or awful, it’s mildly satisfactory.

There are both obvious and more carefully veiled Easter eggs in the sequel that can be entertaining to discover. The series does a successful job of trying to connect some dots and link both series together while also having fans watch episodes to gradually learn new vital story information.

With that said, it’s also possible to carefully skip some unnecessary filler episodes, as with many other anime shows. It’s pretty epic to understand more about the origins of each daughter’s weapons and abilities.

Their parentage makes their powers unclear, even to themselves. The story has a clear theme of self-discovery, memory, and nostalgia, as the daughters unravel their family histories and how they intersect and interact.

The episode structure is pretty much parallel to the original series, as the daughters travel to regain something important that is lost and end up battling demons, saving villagers, and delving into the past and future.

Their bonds are tested and, unlike the original team with Inuyasha, Kagome, Miroku, Sango and Shippo, this team is more about sisterhood and powerful young women. As sisters and cousins, this tale is truly centered on blood family.

Some of the largest standout qualities of this anime are not embedded in the storyline or even in the major themes. The narrative surrounding non-traditional families and parenting is enthralling and adds a layer of complexity that can be reflected in many people’s lives.

There is also a fascinating depiction of gender expression. Towa Higurashi prefers to dress in boy’s clothing and wear her hair short. In fact, none of the girls are overwhelmingly feminine or masculine — they are, simply, themselves.

They also encounter characters identifying as non-binary or without a distinct sex or gender. While the original episodes of Inuyasha did this occasionally, it was never so explicit.

It’s not that there isn’t mad love for the Kawaii badassery of series like Sailor Moon, but it’s also pretty sweet to have diversity, too.

Watch Yashahime: Princess Half-Demon if you’re looking for a light-hearted anime with more insight into Inuyasha and its own unique non-cliche girl power charm. It’s entertaining enough and easy to binge after watching all of your top tier anime series.

It can be streamed on Crunchyroll for free.