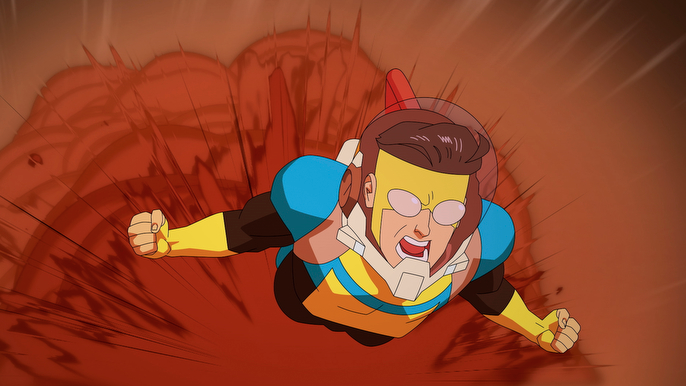 Animation and cartoons have had a revival in the past few years. So, if you are in the mood for another superhero show, you’re in luck. One of the newest animated series on Amazon Prime Videos, Invincible builds on this revival and delivers with promise. The series is directed by Jeff Allen. Originally a comic by Robert Kirkman, Kirkman is also a writer for the series, which helps to explain why the series feels so close to the comic. With a compelling storyline, bloody images, and an incredible cast of voice actors, Invincible disturbs while it excites.

Invincible is a delightfully horrific series for adult audiences. Season 1 has only six episodes out so far, with a total of eight said to air. In the first episode, a murder has occurred, and one hero has survived. The who done it is clear, but the why remains unsolved. This plot point drives the story and leads us to the understanding of how horrifying superheroes might be if left to their own devices. With each new episode, the mystery gets ever closer to being solved. But with each new clue, more and more people seem to be caught in the crossfire of something sinister.

The titular character, Invincible, aka Mark Grayson (Steven Yeun), has been waiting for his superpowers to manifest ever since his father, Nolan (J.K. Simmons), revealed to him that he is the costumed crime fighter superhero Omni-Man. Nolan has a past that is slowly revealed through the series, and his people are understood to have virtuous goals. However honorable their intentions might be, Nolan doesn’t share those values. Mark’s mother Debbie Grayson (Sandra Oh) and Nolan’s wife proves to be the voice of reason and ethics in the most challenging of circumstances. Her presence manages to keep Mark grounded as he develops his powers.

In a charming scene where Mark is sitting on the rooftop with his father Nolan, Nolan decides to tell him about his past — the advanced alien planet where he grew up and the extraordinary people who live on it. Nolan describes his people as diplomatic citizens with superpowers who travel to other worlds in order to help and keep them safe from dangerous creatures. These special scenes between a father and his son creates a false sense of security allowing many to believe this is a wholesome coming of age story. But of course, remember who is writing this series — Kirkman who is responsible for the Walking Dead comic series. So, this is not as wholesome as it might appear.

When blood and gore are introduced, it is towards the end of the first episode in a horrifying fight between supers. By then, the wholesome feeling of a son discovering his powers later in life and his dad teaching him how to use them becomes less heartfelt. The show does an extraordinary job at subverting the playful and carefree expectations of what many are used to seeing from animated shows. The more classic cartoons such as the Justice League fighting villains and saving the day without any casualties is gone. This work suggests something that is more profound than what is just on the surface. The belief that heroes are pure and are out to protect everyone is undermined. This is not the first time that heroes are seen acting like villains. In fact, we have seen this from Amazon’s previous work, The Boys.

The Guardians of the Globe, not to be confused with the Justice League, are the protectors of the first episode. The voice actors for this animation are phenomenal. Each one brings something special to their performance. Outside of the three amazing cast members Steven Yeun, J.K. Simmons, and Sandra Oh, there are also other superheroes who are voiced by outstanding voice actors. The Guardian of the Globe cast consist of Aquarius (Ross Marquand), Darkwing (Lennie James), War Woman (Lauren Cohan), and Green Ghost (Sonequa Martin-Green). Those are just a few of the early heroes before the grotesque battle.

Later on, in the second episode, we are introduced to other superheroes in training. The group of teen heroes call themselves Teen Team, not too dissimilar to the Teen Titans. Not only are the primary heroes composed of great voice actors, but even the B-team heroes are voiced by extremely skillful individuals. The heroes in training are comprised of Robot (Zachary Quinto), Black Samson (Khary Payton), Rex Splode (Jason Mantzoukas), Atom Eve (Gillian Jacobs), Monster Girl (Grey Griffin), and Dupli-Kate (Melise) to name a few. This all-star team conveys the right amount of humor and seriousness with perfect attention to timing.

As the series continues to unravel the mystery that occurred in the first episode, the battle scenes become ever more bloody, or at the very least it doesn’t lessen. The blood that is spilled in each episode accumulates in the opening scene when Invincible’s name takes center stage in the opening credits. When the title page comes out and Invincible’s name is revealed, it starts off clean and pristine, but with each and every episode the title gets a little bloodier. This powerful image showcases how much blood is on him and how powerless Invincible really is in the face of danger.

The most disturbing aspect of this series are the blood and gore that appears in every episode, but the storyline and the mystery that hinges on the discovery is what really brings this animation to life. The series has a wonderful cast, creative storylines, and a little something for everyone. Anyone who is still trying to hop on the bandwagon of superheroes can’t miss this spectacle.

Invincible is currently streaming on Amazon.