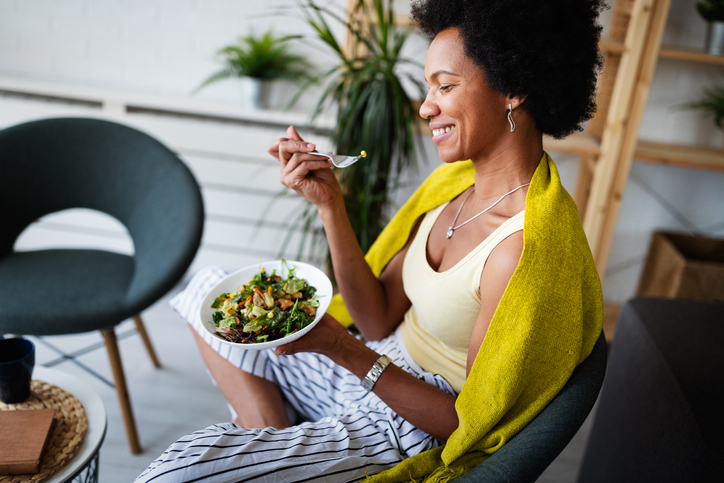 Orthrorexia is an obsession with “clean eating,” but how do you know when you are obsessed? Adhering to a plant-based diet has many positive aspects. Whether it was an aunt in Harlem who lived by Queen Afua’s books and workshops or an uncle who practiced Rastafarianism, Black folks who adhere to plant-based diets have always been present on the margins in Black communities. In the past few years, thanks to popular Black social media influencers like Tabitha Brown, Jenné Claiborne, Koya Webb, and others, a large number of Black Millennials and Gen Z are embracing veganism as a lifestyle. With all of the good that a plant-based diet can do, at what point does the focus on healthy eating become an obsession?

Exactly what is “Clean Eating”?

I turned to psychotherapist Alishia McCullough LCMHCA, who focuses on body liberation and racial healing, for some clarity. When I asked Alishia how to identify if a vegan is developing an obsession for clean eating, she questioned the definition of “clean eating” itself.

“If healthy foods are ‘clean,’ does that mean that unhealthy foods are ‘dirty’?” Alishia asked. “The concept of ‘healthy foods’ and ‘unhealthy foods’ are really moralizations that create a hierarchy. If eating clean is the upper end of the hierarchy, what’s the lower end? What are the ‘dirty foods’ considered to be? If my half-eaten apple falls on the ground, I may wash it off and eat it. Is it dirty? Is ‘bad food’ food that has been injected with fungus, illnesses, or is expired? I have access to foods that aren’t expired but some communities don’t. For example, people who are living off of food pantries. In American culture, we have been fed this idea that we are what we eat. So, if I am what I eat and I’m in a neighborhood that only has ‘bad food,’ I must be a bad, unclean, unhealthy person. I have an issue with orthorexia and the associations that have been placed on ‘clean foods’ in general. Even talking about this is layered.”

Mind blown, I said, “You’re giving me more questions than answers.” We laughed.

I told her that when I had the idea to write this article, I didn’t take into account the privilege involved in even having a conversation around orthorexia being the obsession of eating “clean” food.

Alishia nodded in agreement and added, “I think that specific aspects of this current mainstream vegan movement are grounded in white supremacy. The food must be these perfect little ‘Instagramable’ plates. This is a hierarchical model that projects, ‘I’m a good person because I don’t eat the dirty food that ya’ll eat.’ I have a white vegan client that I’m processing this aspect of veganism with. Some vegans can hold a lot of ego.” Alishia candidly continued, “There can be this entitlement around access to food that really offends me as a Black American. My farmer ancestors were, in today’s terms, vegan; they were growing and eating the majority of their vegetables and fresh produce. However, y’all (systems of white dominance) came in and destroyed our land. Y’all came in and made it inaccessible for us to be able to afford these foods in the grocery store. I go to buy fresh fruit, and it’s expensive. Realistically, if I can’t even afford to eat vegan. Imagine how hard it is for low-wealth Black families. There’s a lot to say around status in the vegan movement. Who are we as Black people? What are we really aligning with?”

After thinking for a moment I shared that from 1997 to 2014 I was vegetarian then vegan in a time when I would be the only Black female vegan in majority-white vegan spaces in New York City. I think a part of me felt like I was in some elite club. Looking back, as a thin-bodied dark-skinned Black woman vegan chef, I was afforded access and privilege and held a certain cache in progressive white vegan circles that were, I admit, alluring. Perhaps, I suggested, I should rename this article “Is the Vegan Lifestyle the new ‘Passing’?”

We both laughed. I continued, “I can see how this could possibly lead to someone becoming orthorexic. What can friends and family do if they think a loved one who is engrossed in a healthy lifestyle is actually dealing with orthorexia?”

Alishia gently replied, “The word that comes out for me when I think of this in terms of Black communities isn’t ‘orthorexia.’ It’s ‘health-ism.’”

Alishia continued “For Black folks, ‘health-ism’ is rooted in how American history has portrayed the idea that Blackness means being lazy, unhealthy, undesirable, over-consuming, greedy, and eating too much. These are all stereotypes cast upon Black people as a badge of shame. If I’m eating and I want more, it reinforces those stereotypes that are assigned on to us. Then, they say we have higher rates of diabetes or high blood pressure and associate it with our food consumption. Naturally, we don’t want to have these health risks, so we monitor our eating by restricting our diet so we don’t become these stereotypes that we obsess about. It can become a cycle of health-ism.

“People aren’t considering that one of the reasons why we have high blood pressure at higher rates is because of the historical traumas passed down in our bodies (and the current daily race-based traumas we face) that have caused us to respond to stress in a specific way, versus other communities. That stress increases our heart rate, and increases our bodies’, down to our bones, ability to hold that stress, which causes all kinds of diseases. Statements like, ‘I can only eat things that are healthy.’ ‘I must eat this amount of calories per day.’ ‘I can only eat fruits and vegetables, no sweets, no salt, no fats, no trans fats.’ These are all statements rooted in health-ism and orthorexia, they go hand in hand.”

Listen to Your Body

Our bodies are individual and require specific nutrition to thrive. “We must take nutrition into consideration in this conversation,” Alishia continued. “Another client and I were talking about how her B12 levels, vitamin D, and iron levels were low, which is common for Black women in our community. Her doctor asked her if she was on a vegan diet, and my client said no. It turns out that it’s very common for folks on a vegan diet to be deficient in these nutrients, and unless you get a blood test it’s hard to know if you are deficient. When you have low iron, vitamin D, and B12 levels, depression, anxiety, and mood are all affected. Studies show that these vitamin deficiencies can attribute to a host of other autoimmune diseases.”

Eating healthy can be harmful when our decisions are unexpectedly rooted in systems that encourage negative self-judgment. Authentic self-care is speaking with your doctor and with a therapist before starting and while living your vegan lifestyle.

Alishia McCullough LCMHCA (she/her) is the owner of Black and Embodied Counseling and Consulting PLLC.