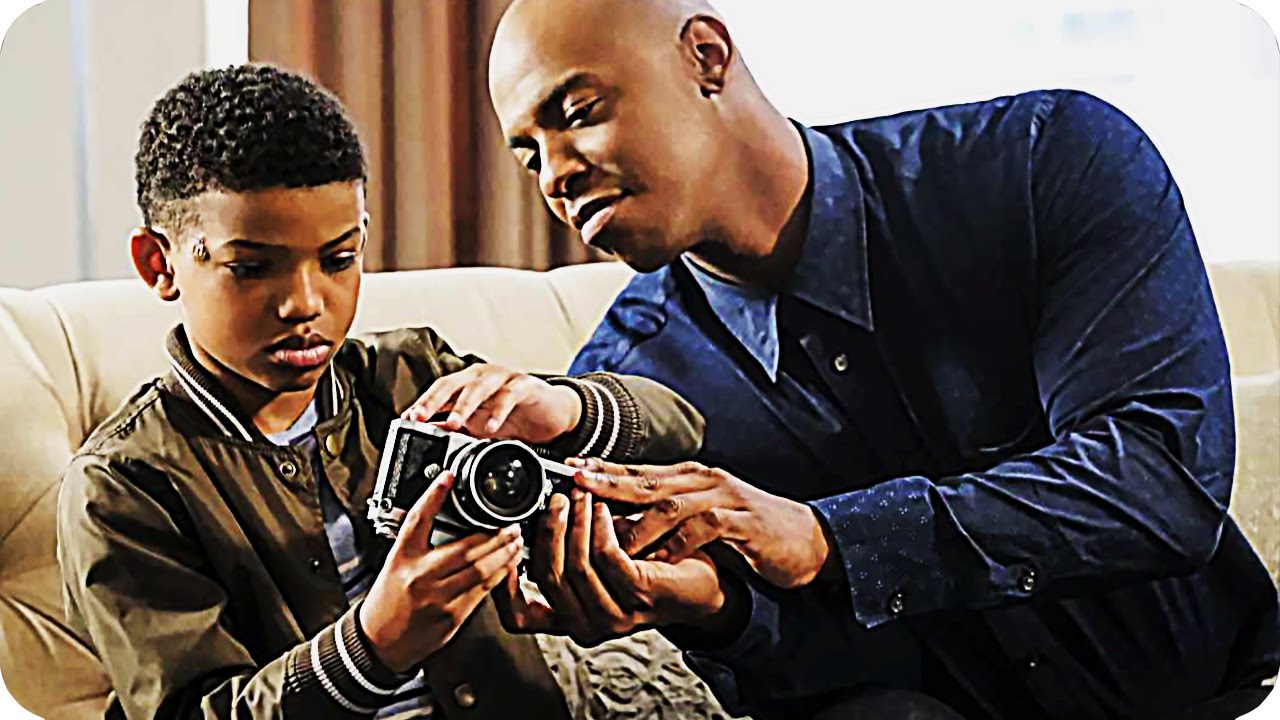 After months of me complaining, the Supergirl writers throw me an old, dry bone and give James a black episode… sigh, let’s get into it.

A lady is walking down an alley when she is cornered by two men who try to rob her. Guardian arrives, beats the bad guys up and saves the damsel. James, however, is dismayed because instead of gratitude the woman is terrified of Guardian.

The next day, still distraught James is taking a rainy stroll through a farmer’s market, and Winn is stalking him. Winn realized the night before that there was something off about his friend and has followed him to find out “what’s up?”

While they are talking about how James wants to inspire people and not incite, fear a “hostile telekinetic” (Winn’s words) with a great twist out starts attacking the farmers market.

James manages to save a few people but Supergirl arrives and stops a pickup truck from being thrown into a building.

The DEO recognizes the assailant as a Phorian, an alien race that isn’t often combative. James volunteers to help the DEO but J’onn shut that down seeing as the DEO is a top secret government organization and you need training to be out in the field.

Later that night, Guardian stops a drug deal and the buyer knows where the Phorian woman lives. Guardian goes to her house to investigate but the only thing he finds there is her son. The kid starts to freak out, but James unmasks himself to show the little boy that he won’t hurt him.

The little boy (named Marcus) is brought into the DEO where he’s being interrogated by Alex, she keeps asking but the child is a strong believer in the golden rule – no snitching. Alex figures out that Marcus has bonded with James and they task James to get him to talk. 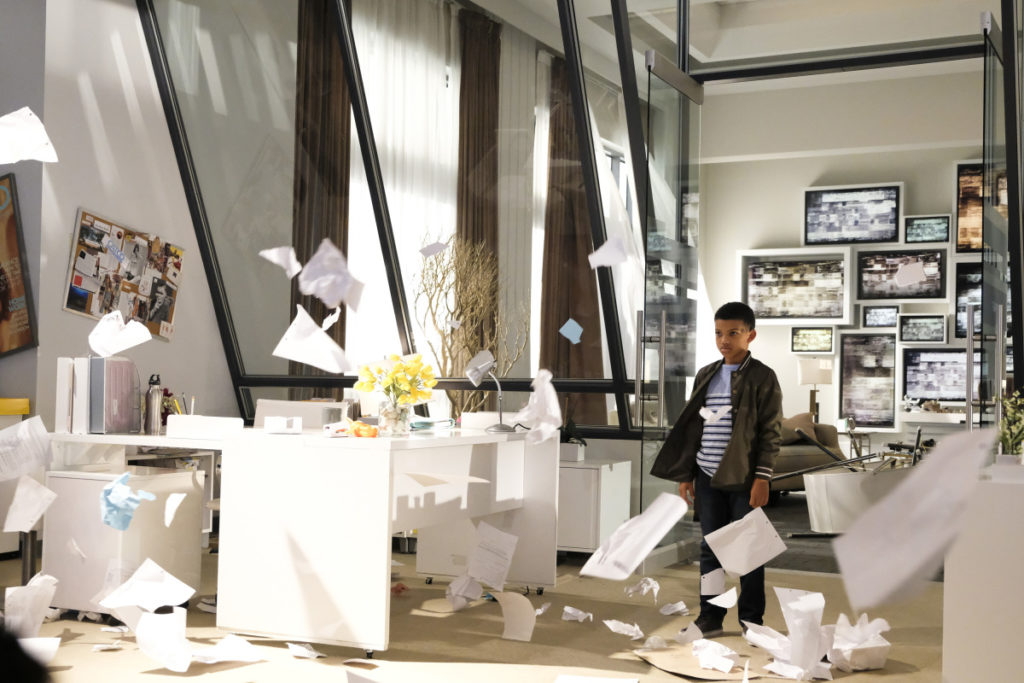 James brings Marcus to Cat Co. as a way to bond. He tells him about all the cameras he’s collected and then starts telling Marcus about his dad and how he died. Marcus tells James that he too lost his dad in a similar way.

James sends his assistant Eve to get milkshakes and curly fries and when she comes back she interrupts Marcus when he’s about to tell James where his mother is. While James and Eve are talking Marcus has a telepathic meltdown out of nowhere and destroys Cat Co. Everyone is too distracted to see Kara change into Supergirl and fly Marcus out of the building. In Supergirl’s arms, Marcus snaps out of it and is completely confused as to what happened.

The DEO puts Marcus in a containment cell to nullify his powers. James is downtrodden because he wasn’t as helpful as he hoped. Despite his feelings, Hank suggests that James take another go at talking to Marcus. The two have an in-depth conversation about feeling like you don’t fit in and letting others into your life.

James asks Marcus again if he knows where his mom is, and he shows him and Winn. Winn has brought along a device that will stop the Phorians from having telekinetic episodes. They find her in an abandoned warehouse, but she isn’t alone. There are around 25 other Phorians with her. Due to Rhea turning on the transmatter ray fully, all the Phorians freak out at once, and Winn’s device can’t help them all. James puts himself in danger by figuring if he can reach Marcus, Marcus will be able to reach everyone else and they’ll stop.

After some very dramatic yelling, James is able to get through to Marcus, and saves the day.

Lena and Kara are having lunch and talking about boybands as best friends do, when Lena gets a call from her mentor Rhea (yikes). Lena is super excited about having this positive female role model in her life that actually cares about her (for once) and Kara tells Lena that she’s excited to meet her work partner when the time comes.

Rhea leaves the restaurant and at the same time, Mon-El is walking down the street eating ice cream (#getyouamanwhocandoboth) when he runs into a guy because he thinks (and is right) that he sees his mother. When he looks up, Rhea is gone and Mon-El is shaken.

The next day, Lena is still frustrated as she works on the transmatter ray and Rhea gives her a pep talk. They test it again and it works.

Due to the melt downs that the Phorians are having the DEO investigates where there are high shifts in atmospheric energy; one of those places is the L Corps testing facilities so Kara gives Lena a call. When she does, Rhea picks up the phone and tells Kara that everything she’s about to do is Kara’s fault.

Rhea turns the transmatter on fully and Kara, Mon-El and J’onn go to stop her. Lena can’t turn the device off, and Supergirl and Rhea get into a fight; knocking Lena out in the process. Whatever Rhea sent for is about to come out of the transmatter portal so Supergirl goes to stop it while Martian Manhunter continues fighting Rhea. She stops him, however, with a device she got from a White Martian that controls green ones.

Rhea seems to be winning when Mon-El pulls out a gun (where did he get a gun?) and threatens to kill her. She calls his bluff though, and he doesn’t do it. Rhea announces that Earth will become the new Daxam and all the ships coming through the portal, are full of Daxamites.

I have a lot of feelings about this week’s episode. While I am super happy about James having an episode focused on the importance of representation, everything felt very on the nose. Supergirl writers have taken the necessary steps to shine a light on important issues (immigration, sexism, President Agent Orange etc.) so a race-based episode isn’t surprising, but this episode felt unfinished? And not just because of the invasion cliffhanger. I don’t know something didn’t feel whole for me.

I love the idea of Rhea being a mother figure for Lena especially considering the toxic relationship she has with Lilian. I realize that people are frustrated because it’s putting Lena in a position where she is aligned with evil (again) when all she’s trying to do is be good. Also, attacking Lena’s blatant mom-issues is obvious for Rhea, but I think it’s one of those things where it’s kind of hiding in plain sight.

The most frustrating thing about this episode was James’s dissatisfaction with his life. His desire to inspire others can literally be fulfilled by his career. James is the standing CEO of a major news conglomerate. Telling people’s stories and standing up for the truth is inspiring. I’m sure Cat Co. has a lot of spaces for inspiring puff pieces that James can take special interest in. THE PHOTOS James takes are inspiring, I’m more than positive Kara told him that on numerous occasions last season.

I know CW shows have an issue with continuity so I try not to get to hung up on them, but it feels like Supergirl completely forgets that James has this amazing job with so much responsibility; either that or I’m crazy and it’s not actually his job in the first place.