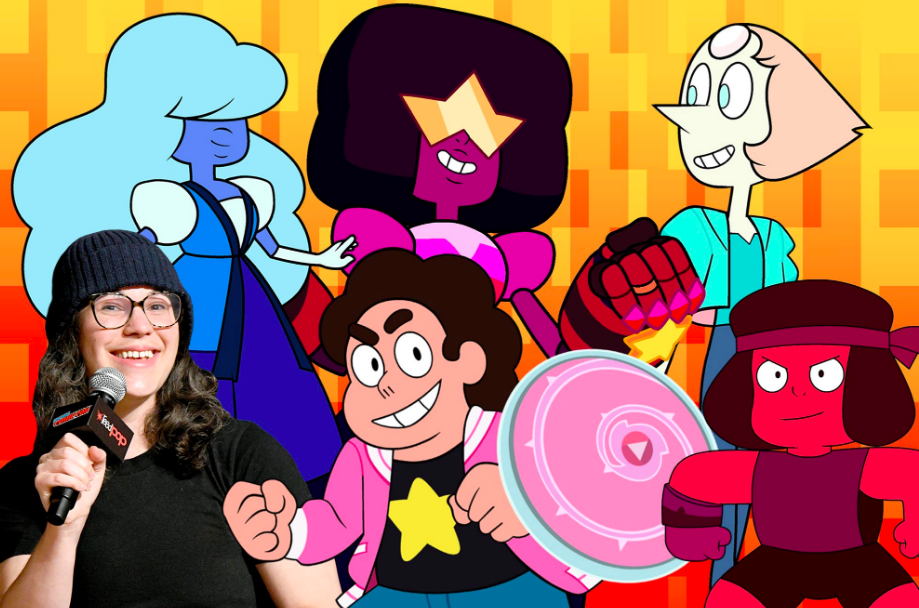 Rebecca Sugar changed the culture of the animation industry forever when she became the first woman to independently create a series for Cartoon Network. Her passion, creativity, kindness and talent created a show that didn’t just inspire artists and filmmakers, it inspired us all.

From the very first episode to the ending credits of the last, Steven Universe is made of love. I remember years ago when my best friend Maria and my brother Vincint both recommended the show to me. They kept telling me that this it had all of the things I love most: rejection of gender roles, diversity, musical numbers, magic, adventure, cuteness, and complexity. I had no idea how much the show would eventually help me and so many others explore our queerness and fluidity with pride.

There really aren’t enough words in the English language (or any language) to thank Rebecca Sugar. There are so many writers, directors, and showrunners who are afraid to go against the grain and create something unconventional that’s actually successful in being spectacular, but she did. As someone that is Black, and a woman, and queer, I saw myself represented effortlessly throughout the show. There was always something magical for everyone to enjoy (ugh, I’m getting tears in my eyes as I write this). Although the show may be ending (it’s over, isn’t it?), fans will never forget that, through the magical story of a young boy who became a young man before our eyes, we were found.

In 2019, I was given the opportunity to meet Sugar at the Grove Mall in Los Angeles for the book signing for the Steven Universe Movie. It was as if I were submerged into an episode of the show myself, as I met a diverse group of fellow fans who were kind, unique and, somehow familiar. We were bonded by our adoration for the show and Sugar. As I saw the cosplays, smiles, T-shirts, hugs, and celebration, I knew that I belonged to one of the best communities in the world — the Steven Universe fandom. In this fandom, everyone could feel the true kinda love.

As I met Rebecca Sugar, all I can remember is shyly saying thank you to her for all she has done. She smiled back at me, and humbly replied, “No, thank you!” I didn’t think it was possible, but at that moment, I became even more of a fan-girl, as I bubbled over her and smiled for the picture we took together.

Sugar isn’t just amazing for her work, she’s amazing for the genuineness of her soul. There are some writers and directors who create a woke and provocative show for the sells, but do not reflect their notions in the lifestyles that they lead. Sugar is honest through and through with her humility and honesty. As any other Steven Universe fan could, I could go on forever nerding out over Rebecca Sugar. She could do for us, what no one else could do.

I remember the early episodes of Steven Universe being light and very cartoonish in their own innocent charm. However, there was a point when suddenly the depth and intricacy of the show shifted. I think it started with the character Pearl (Deedee Magno Hall, she was also at the book signing with her impeccable singing). Pearl’s romantic love for Rose Quartz (Susan Egan) was so full of longing and pain. I had never experienced such a powerful depiction of queer love and passion. Pearl’s jealously toward Greg (Tom Scharpling) was powerful and begrudging. I stared at my TV in awe, thinking, Is this really a children’s cartoon?!

I had wanted, needed, a show like this when I was growing up. Growing in the ’90s, I was buried in white Disney princesses who worshipped toxic heteronormative relationships all in the pursuit to marry princes and live happily ever after. Steven Universe did what most shows fail to do: tell children that the future isn’t always bright — or straight, or cis, or constantly happy. Steven can still love his mother, but also resent her. Amethyst (Michaela Dietz) can again love herself, but also feel insecure sometimes. Connie (Grace Rolek) can still adore Steven but even need her own life. Lapis (Jennifer Paz-Fedorov) can still work to trust others, but be terrified at the same time. Sugar teaches her audiences that it’s okay, even healthier, to be mindful of our flaws and inner selves, because that’s what gives us the strength to be independent together. Thanks to Sugar, nothing is holding us back now, no can push us around.

Steven Universe gave us one of the best ensembles of voice-actors that have ever been in a show. With the outstanding singing and speaking voices of Zach Callison (Steven), Michaela Dietz (Amethyst), Estelle (Garnet), Deedee Magno (Pearl), and more, this series always had us on a musical journey. They don’t just call me Broadway for fun (or because it’s my family name). They call me Broadway because I love, love, love showtunes and everything Broadway. So, we have got to pay homage to the musical talents of this show.

From the singing talent of Broadway star Patti LuPone as Yellow Diamond, to the unforgettable rap, “Stronger Than You” by Estelle, there is something for everyone to love. Sugar was so detailed in her songwriting and instrumentals for each character and fusion. These aren’t just catchy tunes, as they allow audiences to understand the personalities and emotions of each character. Just as with her songs in Adventure Time, Sugar gave us a glimpse into her characters’ strengths and vulnerabilities through music. Even though the curtain is coming to a close, let’s just think about love. Let’s think about cake and flowers, and dancing around for hours.

Throughout this long journey, there have been so many comic book conventions, signings, and events. The fandom has expanded from the screen to much of the world becoming obsessed with this beautiful work of art. In this difficult time of self-isolation and fear, Steven Universe is still bringing audiences solace when we sometimes feel as if we are drifting away.

Sugar never stops reminding fans of what it means to be a part of a community. Beach City represents a place where trans people are accepted, Black and Brown people can be themselves without performing stereotypes, a group of women can collectively raise a little boy, and love isn’t bound by binaries. While Beach City is not without its own problems, it reminds us that systems of oppression, like Homeworld, are unacceptable. Viewers are assured that life and death, love, birth and peace and war on the planet are normal occurrences. Yes, there is nothing worth more than peace and love. If we would only talk to each other as a community, we’d see that we have a lot in common, we really do. As we say goodbye, we must never forget, the answer is love.