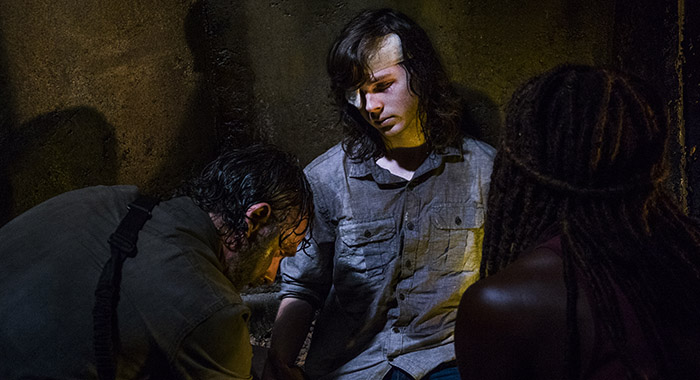 Rage, grief, disbelief and disappointment. These are all of the feelings I have been cycling through since The Walking Dead’s mid-season finale, “How It’s Gotta Be.” Just typing the title, fills me with anger because it didn’t have to be this way.

Fair warning this is gonna be a long one.

From the moment Negan was introduced into The Walking Dead, we were lead to believe that the end goal would be his death. Everything that was done in the first half of season eight was about achieving one goal: kill Negan. We saw Rick allow himself to be captured by Jadis and her people. Ezekiel’s entire army was wiped out, and his best friend killed. Daryl and Tara betrayed Rick’s trust, and ruined the entire plan by being stupid and arrogant, a dangerous combination. Everything that lead up to the mid-season finale was literally for NOTHING, and I became incensed at what a colossal joke season eight has been so far.

In this episode, I saw so many convenient plot devices, it should be used in film school as an example of “What not to do when you’ve messed ish up.” When we last saw Negan, he was talking with Eugene about them being low on ammunition, and therefore needing more bullets. His army was low because they were all mostly dead (he wasn’t aware that hostages had been taken), but sur-fircking-prise, Negan’s people managed to be in three places at the same damb time and in apparently large numbers.

I need someone to tell me where all these people suddenly came from, and how they magically knew which random backwoods country road Maggie and her people were going to be on. I need someone to explain to me WHERE ALL THOSE DAMB EXPLOSIVES CAME FROM, and who set them off in Alexandria when Negan and ALL of his people WERE OUTSIDE. Someone please tell me how Negan got to Alexandria before Rick, when Rick and the Trash Pail Kids left the Sanctuary when the sun was still up, and all of the saviors were inside surrounded by walkers.

I want an explanation as to why we saw Michonne once again leave Carl behind. I want to know why Tara held a gun on Dwight when he showed them multiple times he was on their side and had just killed a bunch of saviors right in front of her face. I want to know what gives Daryl the right to doubt Dwight’s loyalty when for the last three episodes he has done the opposite of being loyal to Rick and the plan. How many times will Rick be on the cusp of killing Negan and then doesn’t? How many times are we supposed to overlook the s**ty writing that has occurred the last two seasons?

From the moment this season of TWD started I knew something was off. As I watched the first episode “Mercy” I turned to my sister and said “This feels weird, the entire episode feels disjointed, in both direction and editing” and she agreed with me. By episode four I knew this season was going to turn out to be the worst, and those feelings were confirmed in episode 6 when everyone kept making mistakes that were totally out of character for the people I’ve grown to love the last seven years. In episode seven, my heart started to break because I could see the proverbial writing on the wall, The Walking Dead was no longer the show it once was.

Yes, it wasn’t perfect, mistakes were made along the way, there were at least two other seasons that were iffy, but to me, the problems weren’t so horrible that I couldn’t look past them. After all, Rick, Michonne, Glenn, Maggie and the others were still together, as long as the family was together I held on. But then the episode that changed it all aired; “The Day Will Come When You Won’t Be,” Glenn and Abraham were brutally murdered, Maggie lost her husband, Rick Lost his best friend and the family lost one of their moral touchstones.

Eventually, Rick, with Michonne’s love and understanding, was able to piece himself back together. They remembered that as long as Carl and Judith made it in their world of death and uncertainty that it would be all ok. I held on because not only was my Richonne ship sailing, but they were determined more than ever to remain standing, while their enemies fell. But in one fell, idiotic swoop Scott Gimple changed the course of the show for the worse.

Gone was the strong family unit where everyone worked together, gone was the respect and trust in the man who constantly fought, bled and nearly died for his family. Gone was the cohesiveness of a story that was showing us that even in the apocalypse as long as we had hope and a future to look forward to, the fight and pain was worth it.

I will never forget how I felt seeing Glenn die. I can say with all honesty I have never in my life had such a visceral reaction to seeing fictional characters die. I wasn’t just about how Glenn and Abraham died, that affected me so much. I’ve never told anyone this, but as a Black woman, seeing Michonne and Sasha being made to kneel, insulted, and threatened with death was deeply disturbing to me. When Carl revealed the bite on his abdomen to Rick and Michonne, I screamed and cried. For me, it was Glenn all over again.

After Glenn’s death, I became increasingly upset with seeing Rick taken back to where he was mentally after Lori died. For much of The Walking Dead, it seems as though Rick has been fluctuating between two states of mind. Either abject grief — where he barely functioned — or being filled with pure rage. As season seven came to a close he became centered. Unfortunately, with Carl’s death that will change…or it should.

From the very beginning, Carl Grimes has been the heart of the show, his existence was the reason Rick has been able to push through seemingly insurmountable odds. For Michonne, Carl was the first person after Andrea, who first reached out and embraced Michonne when he declared her to be “one of us.” It was Carl that Michonne told about the death of her son Andre. It was Carl that encouraged her to let people into her heart again. But all of that growth was betrayed and destroyed when Scott Gimple decided to kill off Carl for “story-based” purposes, and to that, I say BULL S**T.

I became pissed when I realized what Carl’s death would mean. Once more again Rick has suffered a loss that will potentially break his spirit, the death of his firstborn child. Once more again, Michonne loses a son. Not only has Rick been constantly knocked down (physically and figuratively), for the last two seasons it seems that his story was put on the back burner. In my previous review, I said that I was beginning to believe the execs of TWD hated Rick, and now I am convinced they hate Rick Grimes.

There has only been one other time in my life where I have seen a showrunner run their show into the ground, without realizing what an utterly abysmal mistake they were making (*whispers* it’s scandalous). Have you ever seen a show where the lead, the hero is treated so shabbily? (coughcoughsleepyhollowcoughcough) For the most part the story has revolved around Negan and his minions, heck they got more dialogue than anyone from Alexandria, The Kingdom, and Hilltop combined. More time was spent on Negan’s rambling diatribes than meaningful character development for anyone else, including Carl.

Instead of giving us more scenes with Rick, Carl, and Michonne, we got a half a$$ed back story on Negan that no one wanted. We got an entire episode centered around useless Eugene and his cowardly behind. Instead of seeing Carl playing with Judith one more time, we got a scene of him sitting in a dark corner of a dirty sewer, dying. Not only is this (IMO) an unworthy death of Carl, it is highly insulting to the actor Chandler Riggs.

Chandler has spent most of his life on The Walking Dead, he gave his childhood and early teen years to AMC, and they basically spit in his face and shoved him out the door. He deserved better than this.

2. I have a sneaking suspicion that Michonne is the one who will have to put Carl down, as a call-back to their discussion on Deanna’s porch, and this ish is messed up.

The Walking Dead returns Sunday, February 25, 2018 on AMC at 9/8c. Here’s a sneak peak at the episode nine episode “The Last Stand”.