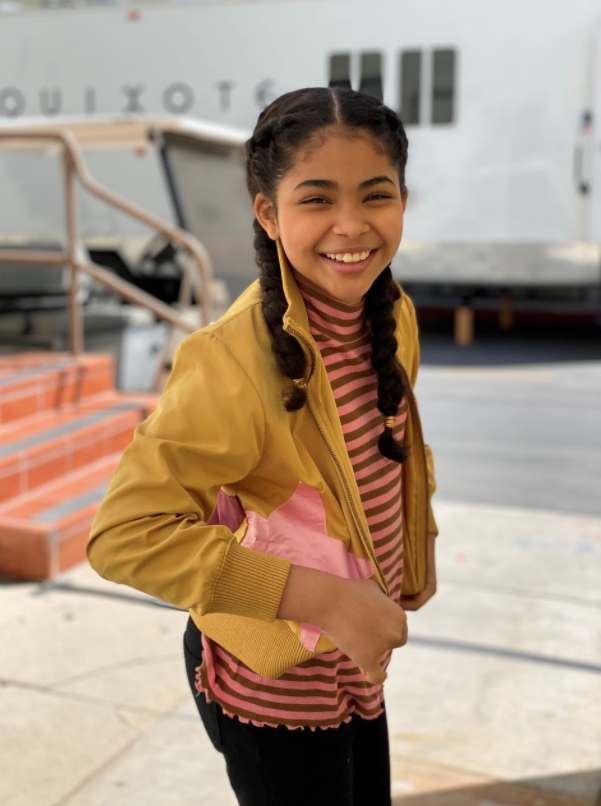 The iCarly reboot is one of the latest shows to be resurrected in 2021. The iconic original series following three best friends, Carly Shay (Miranda Cosgrove), Samantha Puckett (Jennette McCurdy), and Freddie Benson (Nathan Kress), who are making a viral web show became an instant hit on Nickelodeon when it launched in 2007. Now fans old and young can pick up on the lives of most of the original cast members, seeing how their lives changed in the last decade. But the Paramount+ reboot wouldn’t be complete without new cast members Jaidyn Triplett and Laci Mosley. Triplett, who plays Freddie’s adopted step-daughter Millicent, brings vibrancy and youthfulness to the show as the only adolescent main character. Viewers quickly became fans of the sassy and fashionable 10-year-old.

Triplett gives Black Girl Nerds the inside scoop of what it’s like working with the cast and some of her favorite memories she’s already made.

How does it feel to be a part of the cast of such an iconic reboot?

How did you prepare for the role? Were there any nerves with being on set of the reboot?

It was just nerve racking walking into iCarly because it has already built up a fandom and it’s already a really amazing show, so I felt like the stakes were high. My mom always said that basically Millicent is my alter ego, like she’s someone I want to be. So portraying her is really cool because I get to be someone that I’m not. It’s really awesome because you usually bring a lot of yourself into a character, but with this I could only bring a smile. The rest is just a whole other person. I thought it was really nerve racking at first, but then it just became really fun.

Viewers quickly became fans of Millicent. Can you tell me about the great response from fans?

It’s been so positive so far. We went through like a down part when the trailer came out but ever since then it’s been so positive. People are loving it. I’m so happy because usually reboots are a bit underestimated because most of the time it’s not the same. But I think differently of this reboot because it’s just the same thing! It’s continued. It’s not like new shows where they just start a whole new life. It’s just ten years later. It’s been really positive so far, and I’m so happy fans are loving it.

Your character wears a lot of fun costumes and hairstyles. Do you have a favorite look?

The Romeo and Juliet episode was a really wonderful episode because I had so much fun. I got to wear this weave attachment in my hair and this really glittery and pretty princess dress. It really represented my character Millicent and also my mother’s life. If you’ve watched the series, then you know that Millicent has a bit of a hard shell around her so it really digs into the topic of why she’s like that. It’s because she’s been through so much. You can also see what her mother does. It’s just a really interesting episode because you get to learn so much and you see so many details in Freddie’s life, his ex-wife’s, and even Millicent’s.

I’m excited for more crazy costumes mostly because I had the Romeo and Juliet costume and in the most recent episode I was in a 1950s costume. I had a red lip and eyeliner on for the first time. So I’m just really looking forward to really bringing out the fun side of the costumes!

When you’re not shooting, what do you all like to do for fun behind the scenes?

Me, Miranda, and Laci — usually on shooting days we’ll go into Miranda’s trailer, we’ll have lunch, and we’ll just talk, maybe watch some TV. Also me and Miranda go hiking. About a month or two ago me, Miranda, and Laci went to Disneyland together. It’s just really fun being able to hang out with them off of set because it’s a really good dynamic off camera. It’s really fun being a part of iCarly because they’re really fun in real life and honestly a lot like their characters in real life.

You’ve mentioned how great it’s been working with the cast. If you could work with any star who would it be and why?

Ooh! Lin Manuel Miranda is amazing. He’s Puerto Rican and so am I. I get it from my mom’s side, and we’re just huge fans! We love Hamilton and In the Heights, both amazing movies. I personally love musicals so blending acting and music is amazing because you get both of those at one time. Also director Ava DuVernay, she amazing! Working with her would be a dream come true, so those two people definitely.

‘iCarly’, the OG of Influencers Has Returned for a Second Season!