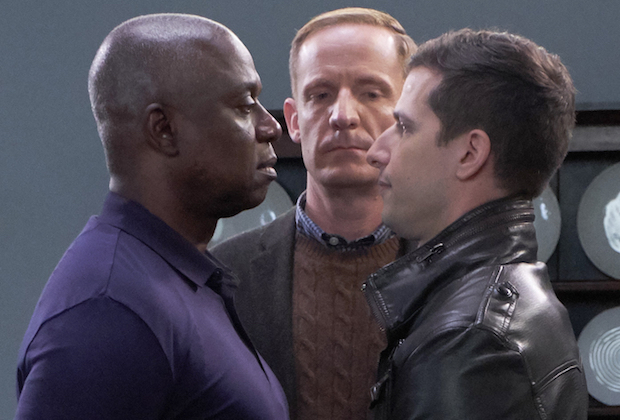 Brooklyn Nine-Nine is BACK! It feels like 1,000 moons have passed since we last saw this show. Black Panther happened, President Circus Peanut has done a lot of dumb shit, I had a birthday, and Beyoncé season is upon us. But seriously the last episode aired in December! It’s been awhile and I’m excited.

We need to talk about Kevin

Last time we left off, Seamus Murphy threatened to kill Kevin after Captain Holt and Jake thwarted his plans. At the top of the episode Kevin is teaching a class (?) or leading a museum tour — honestly, I’m not sure. What is Kevin’s job, again? Anyway, he’s at work when he is bombarded by Jake in disguise. Through a series of hijinks, Kevin is transported to a van where he meets his husband.

At the precinct, Terry gives the team a rundown on next steps for Kevin. They’ve made their own safe house for him since Seamus Murphy and his men managed to kill two people in protective custody. The team is about to schedule safe house shifts for the next two months when Jake volunteers to be on watch the whole time.

He feels guilty that he inadvertently is the reason that Kevin is in this position. Holt has set safety precautions throughout the house that are so extreme they have to crawl on the floor to get throughout most of the house due to fear of them being shot.

While they are in seclusion, Kevin and Jake slowly go insane as they have nothing in common, and the only source of entertainment they have is Jake’s large collection of Nicholas Cage movies. After a couple of weeks, Raymond stops by and lets them know that a contact of his at organized crime says that they know where Seamus is and they’re going to bust him. They have a raid watching party at the safe house (not quite sure how that’s a good idea?) but it’s a flop, Seamus isn’t there. Holt’s restrictions get more intense, which bring Kevin and Jake to the brink of madness.

Kevin asks Raymond if it’d be possible for him to visit the library with supervision. He shuts that option down immediately which cause a huge fight between the two of them. Jake decides to go anyway, and of course, they get caught by Holt, causing an even bigger fight. They all heading back to the safe house on the bus when Captain Holt realizes they’re being followed. He tells Jake and Kevin to make a run for it, but he gets caught instead.

Amy, Scully, and Terry help Jake and Kevin find where Seamus is keeping Holt, but Jake won’t let Kevin help because he’s a civilian. One of Seamus’s men finds Jake hiding out and he gets tied up with the Captain. Just when it looks like they’re going to eat it, Kevin crashes through the abandoned warehouse with a car and saves them.

After the raid turns out to be a bust, the 99 reconfigures to decide what to do next. Seamus Murphy’s girlfriend works at a salon so they send Rosa there undercover to see if she can get her to talk.

As someone who used to work in a salon, I’ve deduced that Rosa essentially spent all day in that chair, because she dyes her hair blond AND gets a perm.

With Gina’s help, Rosa is able to give life to her cover persona Gabriana who is a messy, gossiping, disaster. Eventually, Seamus’s mistress/girlfriend admits to Rosa that he is in a warehouse in Rochester, and leaves the salon looking like the blonde Nanny (as in Fran Fine).

I really missed this show, to the point that I forgot how funny it was. Andre Braugher was the star of this episode, his dry humor was particularly dark, which made him hysterical. It was also great to see more of Kevin. Marc Evan Jackson really sells the role and he and Andy Samberg play well of each other.

I was a little concerned about Jake’s declaration that it’s his fault that Captain Holt and Kevin are in this situation because it came across as if it were his fault only. It was as if the writers forgot or chose to omit the fact that Captain Holt’s sacrifice wasn’t just for Jake but Rosa as well. So I found it a little weird that she didn’t volunteer or say anything about it.

I also found it strange and out of character for Amy to dismiss jigsaw puzzles. The meticulousness of it seems like something she would enjoy, but I also appreciate when they take time to humanize the otherwise sloth like Scully and Hitchcock. It would have been interesting for them to have that in common.

I am curious to where the rest of this season is going to go, it kind of felt like Seamus would have been the biggest obstacle or looming presence throughout the rest of the season.

“I shot a watermelon once, it was everything you want it to be. I miss Amy”.

“Do you know what it means to clap back Raymond? Be. Cause. I. Do”

“I came alone! Title of my sex tape!”