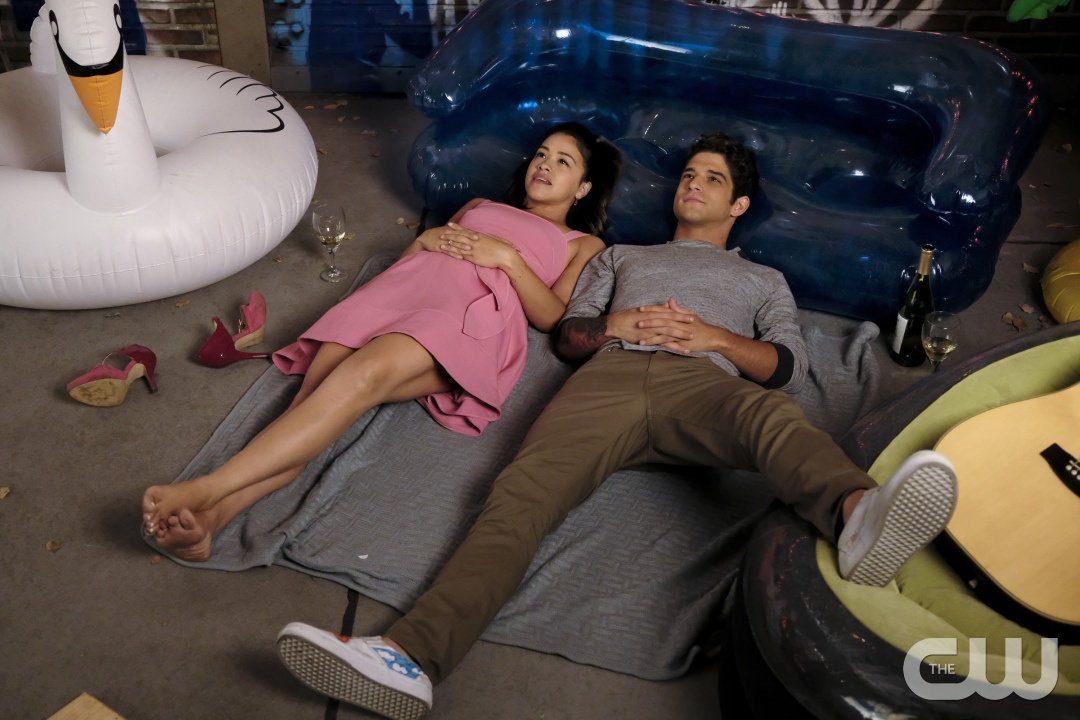 Jane The Virgin returned on Friday night with a change in narration style, a noticeably older Matelio, a new love interest for Jane, a honeymoon of sorts for Xo and Ro, and a newly-broke Rafael.

First things first, Jane’s new-old love interest, Adam (played by Tyler Posey), comes with his own narrator and title cards formatted in the style of comic books, because he’s a comic book illustrator. His (Latin Lady) narrator cuts in at the funniest moments and, if the showrunners decide to keep with the narrator banter for this entire season, I do believe it will be immensely enjoyable — if this episode is any indication.

You’ll remember that while Xo and Ro were married during the season three finale, Darci also dropped the Baby Bomb that she was pregnant with Ro’s baby — ruh roh! That complicates our newlyweds’ “honeymoon,” with Xo lamenting that she’s “chasing sonograms and getting into Twitter wars” when she should be “sipping Mai Tais and having honeymoon sex.” Well, she ain’t wrong.

And speaking of complications, Jane’s feelings for Raf make an unexpected appearance during her phenomenal date with Adam; luckily those feelings get stamped out rather brusquely over a glass of wine and a post-shower (Raf, solo, to Jane’s… disappointment?) argument about money and Mateo’s school. (Because, guess what, Raf is living with the Villanuevas since Luisa got ahold of the will that gives her access to Raf’s shares of the Marbella.) While it’s left to be seen whether or not Jane or Raf will win out in the fight about Mateo’s school, this season’s opener leaves no question that its romantic pairings (for now) are: Jane/Adam and Rafael/Petra. And I am solidly pleased with that.

The whammy cliffhanger of the episode occurs when Petra, playing Anezka, approaches Luisa with an offer for the Marbella. Luisa asks her if she’s really Anezka, to which Petra replies in the affirmative, only to be left open-mouthed when a worse-for-wear Anezka appears behind her. Elsewhere, in jail, Sin Rostro murders a man after confirming that said man was the only person who knew the true identity of a so-far mystery man.

Since it seems for now that this is the only time I may have to talk about the love triangle that’s become so central to Jane The Virgin, I’ll just say this: I could not have been more thrilled when Raf was more concerned about making things right with Petra than talking with Jane. Sorry bout it, Jafael shippers, but you have to admit dating a creative comic book illustrator who plays guitar and enjoys looking at the stars is kind of perfect for Jane. PLUS he wrote her love cue! (swoon!!) If Jane could live happily ever after with Adam now that they’re older and not trying to get married at 18, I’d be super pleased (I know, I know — it’s a telenovela, so there’s no telling what could happen). And how adorable was Petra when Raf told her about the delayed texts!? (I mean, she’s still super ridiculous, but kind of less so with Raf… and he clearly still loves her, so…?)

It seems as though the Sin Rostro + Luisa villainous love story is going to be front and center in a way it hasn’t since season two. I have to admit, while I do appreciate the lesbian lovers who would do anything for one another, I do really wish this plot arc would fade away. Sin Rostro’s in jail; I need her to stay there. Luisa is … well, she’s Luisa. She should probably stop trying to steal money from Rafael, and then maybe go to therapy, and then go back to school in a field other than medicine? We’ll see how this Sin Rostro plot unfolds, I suppose…

With this episode, we’re reminded that while the show’s titular character may be Jane, and while many of us are watching this show for the brilliance that is Gina Rodriguez, Jane isn’t the only character worth paying attention to. The entire cast is brilliant, and I for one am looking forward to another season of family bonding, Rogelio tweets, Darci drama, mishaps in the Marbella, and Mateo’s adorableness.