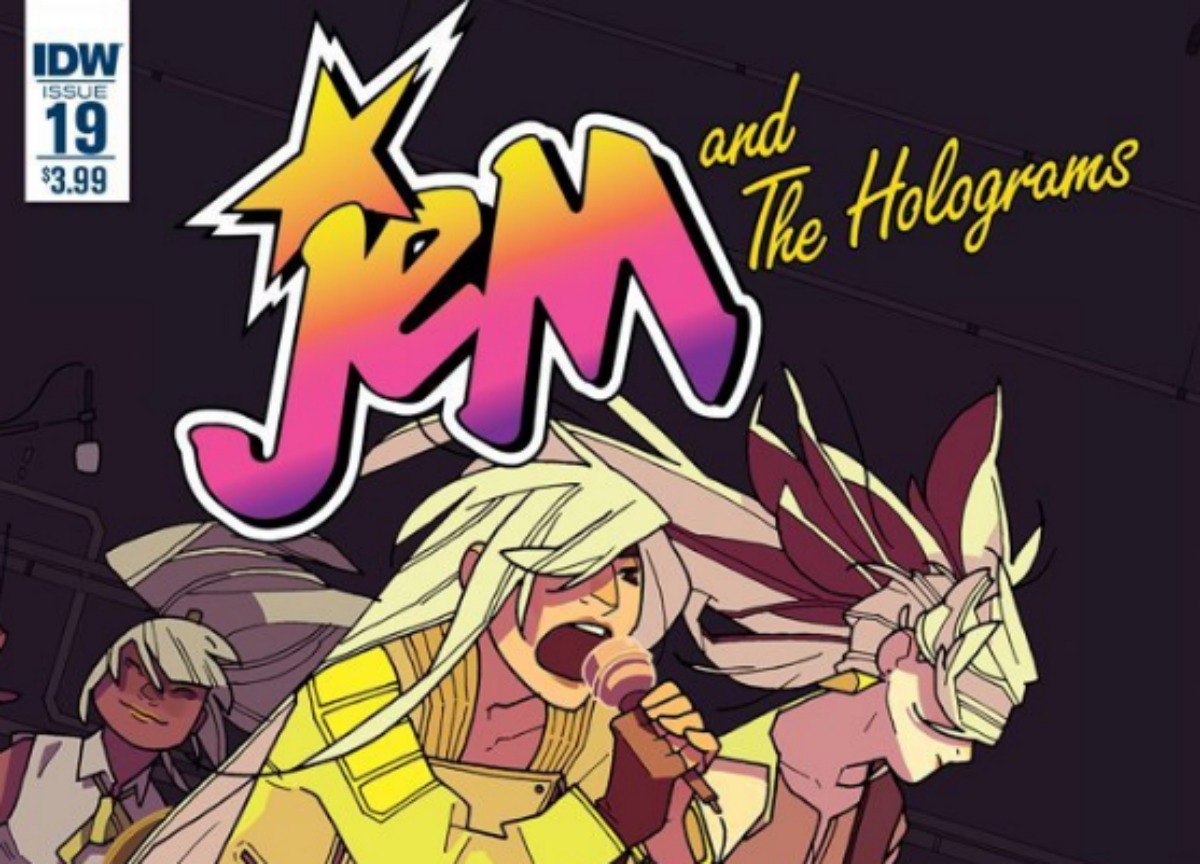 Jem and the Holograms, Issue #19

This issue is met with Kimber and Aja still trying to reconcile Shana wanting to leave the group. Their conversation is interrupted by Jerrica (in Jem form) entering the bathroom. That’s curious.  Jerrica has no reason to be in Jem form before they get to their destination, but Kimber and Aja accept her lame excuse about having to be Jem more and let it go… for now.

As the girls head out to a meeting, the conversation shifts to who should take over drumming duties for the band once Shana is gone. Aja suggests her boyfriend Craig, but Jerrica and Kimber are adamantly against it, citing that when Aja dumps him they’ll be out of a drummer again. Way harsh, girls. Aja insists she’s not going to dump him, but no one’s is buying it. Only time will tell. Unbeknownst (finally, a reason to use that word!) to her “seestras” (for the OB fans), Shana is watching from the window and thinking they’ve already moved on without her. Sad.

Over in The Misfits camp, they’re trying to record a song, but the record company (aka Elsie) isn’t happy with the sound. They’re told to take a break for a few hours, but it’s made clear to their manager if their sound isn’t corrected soon, they’re going to be dropped. While The Misfits are out, Jem and the Holograms arrive for their meeting. They have a couple of hours of auditioning new drummers lined up.

The Misfits are at lunch and while the rest of the girls are eating, Pizzazz chats with Eric about what going on. They know Elsie isn’t happy with their sound. Eric suggests that they drop Blaze, but Pizzazz is having none of it. She wants to continue exploring a new sound, and that includes Blaze. 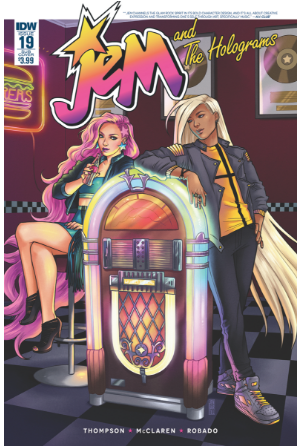 Back in the studio, Jem and the Holograms have narrowed it down to three drummers. They’re good, but they all know that no one could ever replace Shana. Elsie knows how they’re feeling, but she demands they choose one.  They hear another band playing down the hall and Jem can’t help but follow the sound.  Elsie explains that The Stingers (a little blast from Jem past) are new to Los Angeles and she’s trying to sign them. She explains that she bumped The Misfits for them just as Pizzazz returns.

Pizzazz and Jem are in the same room, which of course means an argument.  The Stingers sit back and watch. Finally, Riot (the leader of The Stingers) introduces himself to Jem. Kimber and Aja arrive just in time to be introduced to Riot. When Pizzazz learns there’s no more studio time, she storms out, pushing Kimber on the way. It’s clear that the brief Misfits/Holograms team-up is definitely over.

Shana and Aja waste no time teasing Jerrica about how starstruck she was with Riot on the way home. The subject of her staying in Jem form when she doesn’t need to comes up again and I have a feeling this is going to become a bigger issue in subsequent issues. Back on the ride home, Aja doesn’t think it’s a good idea to let Shana know how hard it is to replace her. She doesn’t want to make Shana feel guiltier than she already does. Kimber thinks it might make Shana sad if she thinks she’s easy to replace, but Jerrica agrees with Aja. At the end of the day, they all want Shana to follow her dreams and they’re willing to do anything to make sure she does that — because they’re awesome sisters.

At the studio, Elsie is talking with The Stingers and apologizes for the tension between The Misfits and Jem and the Holograms. Riot seems to brush it off and offers to sign with 5X5 Records, but he has a condition: THEY HAVE TO DROP THE MISFITS FIRST!

This was another great issue from the team, and the story is starting to pick up steam again. This is the first issue with artist Meredith McClaren and it’s a noticeable change. McClaren’s art is a huge departure from Jen Bartel’s but that’s not necessarily a bad thing. McClaren’s style is more minimalist and geometrical: there are fewer details in the faces, but she still manages to capture expressions perfectly.  There’s some trouble coming on the horizon; I can just feel it — and I can’t wait to see what happens in the next issue.

Cherra Hampton-Mitchell is a hardcore Wonder Woman fangirl, blerd by birthright, internet junkie, and chronic sufferer of wanderlust. In her spare time, she likes to live tweet television shows and make apocalypse survival plans. You can find her on Twitter, Instagram, and Tumblr – @WildYoungCharm