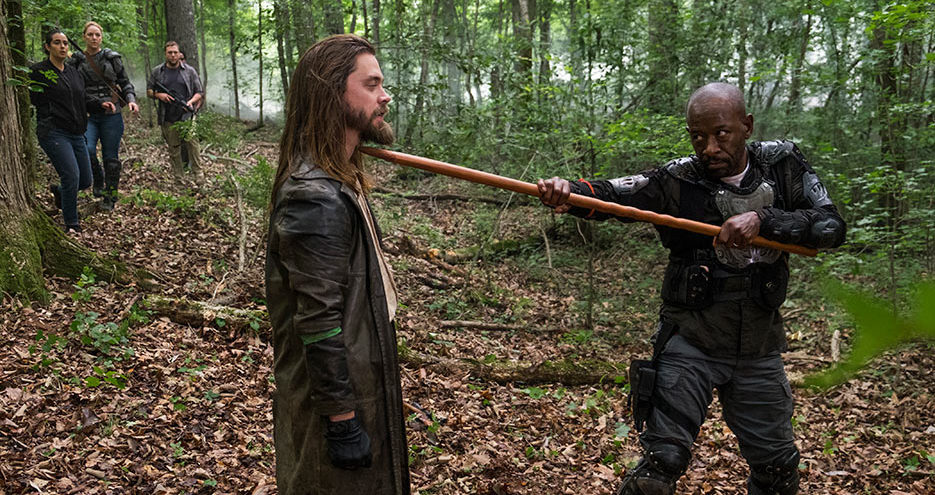 The Walking Dead’s third episode “Monster” picks up right where “The Damned” ended, with Rick being held at gunpoint by an old acquaintance now turned foe.

Rick tries to reason with Morales by telling him of what he and his family has been through. He speaks about all the people he has lost, people that Morales knew, such as Shane, Lori, Andrea and Glenn, whom Negan killed simply because he could. But Morales doesn’t want to hear it because he’s Negan now too, and just like him Rick has killed people.

On their way to Hilltop, Paul (I refuse to call him Jesus) attempts to explain his reasoning for sparing the Saviors to Morgan. He spews rubbish like, “Nothing is permanent but impermanence” and “there’s many kinds of people, many kinds of dying.” Dude, what the heck are you talking about? The Saviors kill people for enjoyment, they take pictures of their victim’s mutilated bodies and put the photos above their beds. Honestly, I was done with Paul at this moment, this character is truly getting on my last nerve.

The group happens onto a small herd of walkers and while everyone is distracted, some of the captured Saviors manage to make a break for it through the forest and Morgan runs after them. Just before Morgan can start shooting, Paul once again stops him. Morgan tells him that this is the life they have now, this (meaning killers) is who they are, who they’ve had to become to survive. Paul responds by saying “there is war and then there’s peace,” that they’ll have to find a way to make peace with the saviors. Morgan and Paul get into a fight that culminates with Morgan walking away saying that he doesn’t want to do this anymore.

In the next scene, we see traitorous Gregory arriving at Hilltop begging to be let inside. Maggie looks at him through the gate, asks what he’s doing with Gabriel’s car and he says he doesn’t know who that is and he found the car. (He’s such a liar.) After spewing drivel about being forced to betray the Hilltop community and being scared, Maggie lets him in and to that I call ABSOLUTE BULL POOP on the writers. There is no way the Maggie we know, the Maggie they’ve developed over the last seven seasons would’ve allowed Gregory with his cowardly behind to come back, especially considering that he’s done this very thing before, like how sway?

Y’all, this is the second time I have to talk about the problematic ish that Paul says and does. His talk of peace is all well and good, except for one thing, peace can only be made if BOTH sides want peace. You see what dear ole Paul is forgetting or maybe purposely ignoring is that from what we’ve seen, the majority of the Saviors don’t want peace. They seem perfectly fine to go along with whatever sadistic torture Negan decides to mete out.

Sure there are those who live in fear, like the women he forces to have sex with him for shelter and food. Yes there are those who stay out of fear that he’ll burn their faces off with a hot iron, as he’s done to Dwight and the doctor. There are those that he’s held captive and starved in locked rooms as done to Daryl and Sasha. But even taking these factors into consideration, Paul has forgotten that the majority of the Saviors are made up of people who willingly follow Negan, including those the he forced to surrender. Knowing all of this, Paul had the audacity to bring these people to Hilltop, Maggie’s home, the place where Glenn and Abraham are buried, and for that he’s on my s**t list.

At the end of the episode, Ezekiel and Carol have led their group to one of the Savior’s hide outs, and just after he congratulates them on all making it alive one more day, he spies something in the distance and shouts for them to scatter before a hail of bullets rains down on them. Sigh, how much you want to bet me that this is going to mess Ezekiel up? I can almost guarantee that Ezekiel is will be this season’s Morgan from season 7.

To conclude, I honestly don’t know what the plan is for this season, the show seems to be taking a path that makes absolutely no bloody sense with regards to character development. From the beginning we’ve seen people make decisions that not only go against who we know them to be, but also do things when there’s been no sign previously that this is where they were going. For me, these three episodes (which is covering one day that isn’t even over yet) have suffered from the absence of not only Michonne, but the dynamic that Team Family has when they’re all together.

The Walking Dead airs every Sunday on AMC at 9/8c. Here’s a sneak peak for next week’s episode “Some Guy“.