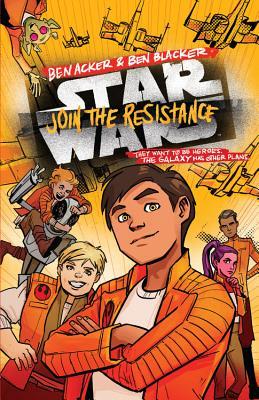 Middle-grade books have thrived in the new canon world of Star Wars books and the Join The Resistance series by Acker and Blacker is on the road to being another successful series for the imprint.

This book is set a short time before The Force Awakens. Our guide through this first book is Mattis Banz, a young orphan who has grown up loving the stories about the Rebel Alliance, especially those of Luke Skywalker.

When Mattis is recruited by members of General Leia Organa’s resistance, he immediately agrees to sign up to make a difference in the galaxy.

However, the reality of the Resistance isn’t as easy as Mattis thought it would be. He immediately gets in trouble helping a fellow recruit commit a prank, he can’t seem to connect with any of the other members of his team — especially a young Zeltron named Lorica, who is known for taking down a band of smugglers, and his group leader Jo, who always seems to find him in the wrong place doing the wrong thing.

When the entire squad is sent to a remote location, they will need to trust each other to survive against an unexpected threat.

This book is perfect for young readers whose fandom started with the Force Awakens. There are some nice cameos that more established fans of Star Wars will instantly recognize, but the focus is on bringing Mattis and his team firmly into the galaxy.

The characters in this book are very well written and entertaining. Though I’m not the target age range for the book, I found it a fun read with a nice balance of humor and action. I’m looking forward to the next book in the series.