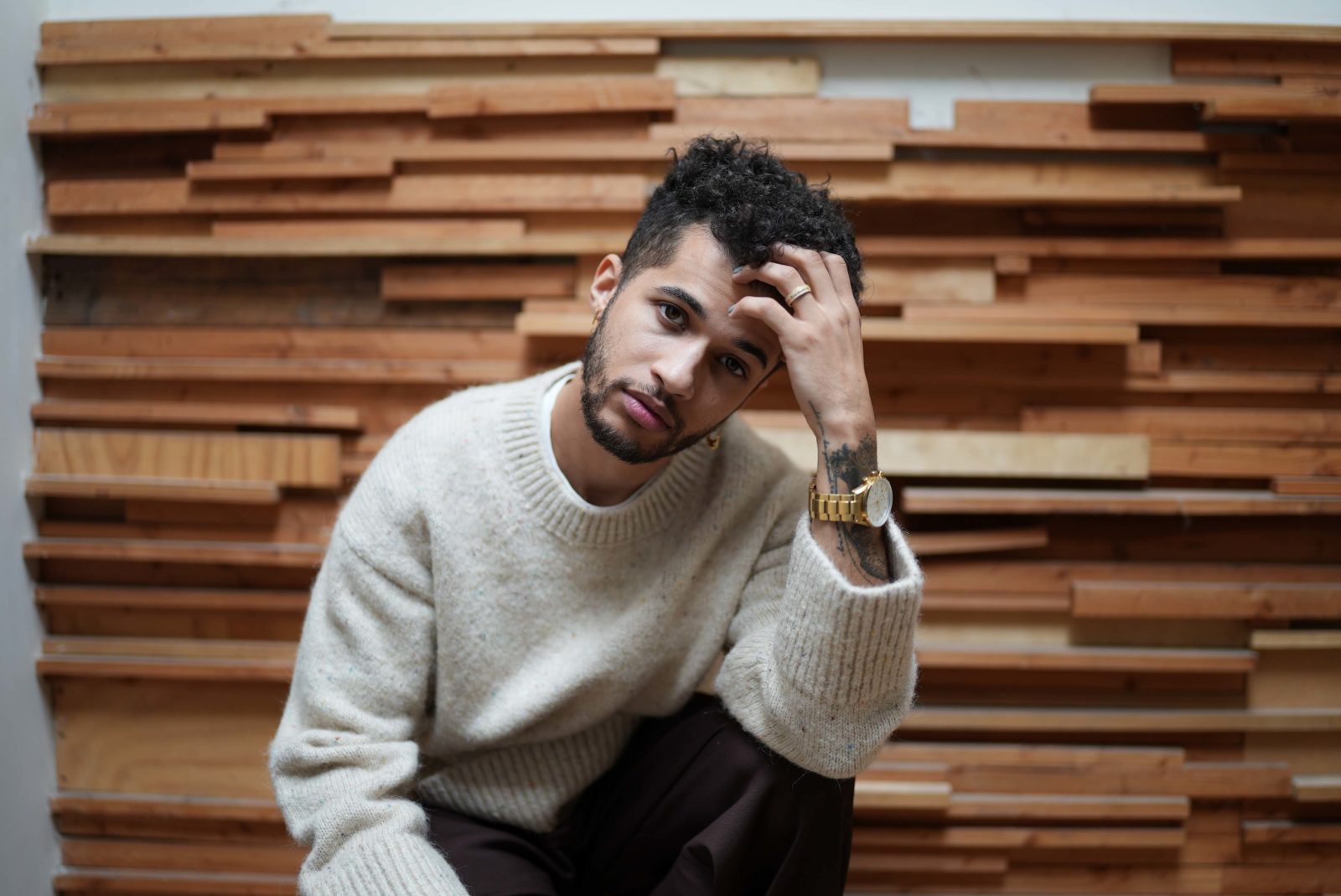 If “booked and busy” were a person, it would be the spitting image of Jordan Fisher. He sings, he dances, he acts; he has tread the boards in Hamilton and Dear Evan Hansen, and now he is lending his vocal talent to the new Disney+ series Star Wars: Visions.

The Lucasfilm Animation series presents nine Star Wars stories crafted by seven Japanese animation studios. These studios — Kamikazi Douga, Studio Colorido, Geno Studio, Trigger, Kinema Citrus, Production I.G., and Science SARU — each produce a unique take on a galaxy far, far away. Each episode contains both a Japanese and English dub and features vocal talent from all over the world.

Fisher’s episode is “The Elder,” a fascinating master/student story featuring performances from David Harbour (Stranger Things) and the iconic James Hong (Kung Fu Panda). Fisher plays Dan, a young Padawan on the rise, who is sent with Tajin to explore the Outer Rim. Tajin has a strong connection with the Force and Dan is eager to prove himself as they face off against a mysterious Elder who has lured them to a mountaintop.

The short film has an animation style reminiscent of Attack on Titan with muted yet clean lines and classic throwback fight scenes. Due to COVID, vocal recording was done mostly solo, and Fisher took on the challenge with excitement. BGN was able to speak with him over Zoom about the role and about what the project means to him personally.

What interested you in this project and what kind of relationship do you have to Star Wars and to anime?

Opinions are opinions, but objectively speaking Star Wars is great! [Laughs.] So you can say all day and night that you don’t like Star Wars because x, y, and z, and unfortunately for those people, they are objectively wrong!

One of my closest friends is a massive anime fan, and for whatever reason, he just hasn’t been able to sink his teeth into Star Wars as a franchise. Star Wars is its own genre, and I love being able to talk with anybody who is willing to listen if they haven’t been able to figure out why they don’t love it. I’m thrilled because I know he’s such an anime fan — he can’t let any anime go without watching it — and because I’m voicing one of the characters, he’s gonna want to watch it. As a fan of Star Wars, along with my love for anime, I’m excited to see his tone shift right into talking about Star Wars. I specifically know of a few of these Visions anthology pieces that [anime fans] are really going to sink their teeth into.

I was able to go to a small studio; sadly I wasn’t able to work with James [Hong] or David [Harbour].

How does that work? Is it something where it’s just off a script? Because, of course, the end product definitely has the anime-style stilted singular phrases that are intricately pieced together, but the dialogue seems very reactionary, like you had something there to read off of.

It is! You do have to go through the whole anime list of different noises and sounds that go beyond anime culture — it’s Japanese culture. A lot of these sounds are actual responses and elicit ideas, and as you work through the list, you respond with these different sounds, whether they be gasps or oh! or anything along those lines. It helps with pacing and style, which is evident in that [Studio] Trigger animated it, so the English and Japanese dubs are similar in pacing. As an English-speaking actor, you adopt Japanese phraseology and speech patterns. Once you get to the English dub, the whole thing is pretty much done; the Japanese dub is finished, and animation is usually about 85% there. So you go in with a guideline, and you have to figure out how to shift your cadences and speech pattern to be within the confines of what’s already done.

“The Elder” is very Japanese in tone — just the idea of an Elder, a master and his student — but it worked so well with the Sith/Padawan relationship, especially seeing Dan’s journey where he’s cocky yet he comes to appreciate his history.

He gets his lashings. It reminds me a lot of young Obi-Wan and his relationship with Qui-Gon. This is heavily explored in The Phantom Menace and touched on in Rebels and The Clone Wars, but we see a slightly more fleshed-out version of what could have been happening during that time, just with a different Master and a different Padawan. The beauty of Star Wars is there’s so much to tap into. We won’t in our lifetime know the full scope of the Star Wars universe, and that’s an exciting thing. To be one of the lucky ones who gets to be immortalized in that family and in that space is a really, really cool thing.

It’s very cool! What do you see as the overarching theme for the episode? Is there anything you want the audience to take away while watching these shorts?

Going into it, most of the viewers are going to be either anime fans or Star Wars fans or some combination of both. The real minority is going to be anybody who hasn’t watched Star Wars, but maybe it will encourage them to jump in. The water is fine! We’re successful if Star Wars fans who don’t love anime fall in love with anime or if the anime fans who don’t love Star Wars fall in love with it after this. They could then decide on their own time and in their own way how to expand their knowledge base and dive deeper. There’s so much rich content on both sides. That’s what I want the real takeaway to be.

Star Wars: Visions premiered Wednesday, September 22, and the entire first season is available on Disney+. Be sure to check out Jordan’s episode, “The Elder.”

Jordan Fisher Takes on His ‘Next Big Thing’ with Archibald

Jordan Fisher’s Wedding Was Delayed Due to Covid-19