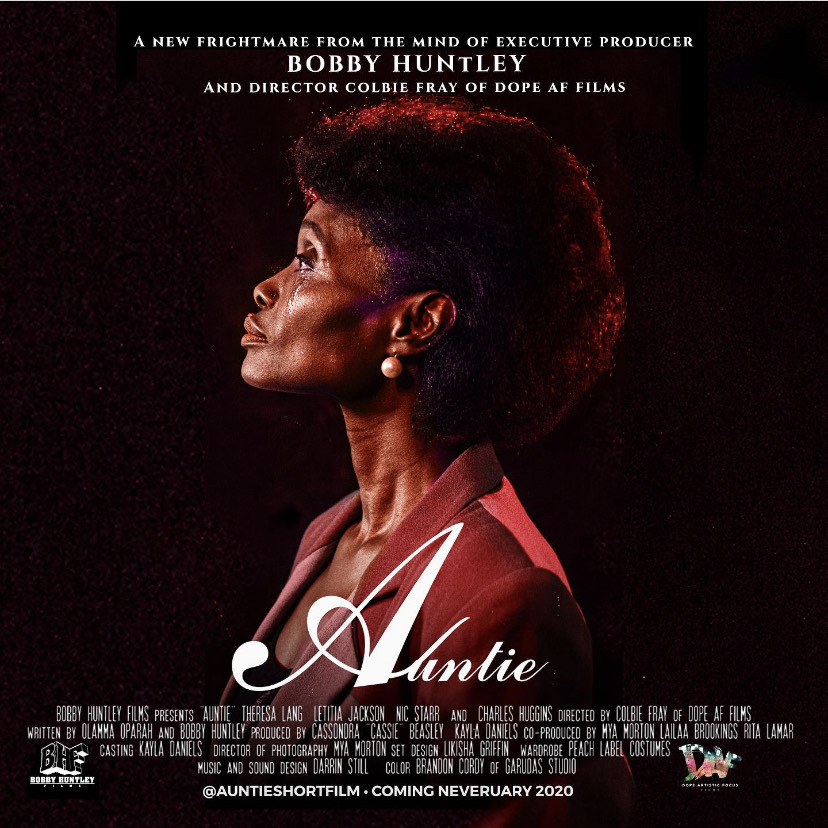 What happens when you pit the two Aunt Vivs against each other in a comedy-horror parody created around the framework of Jordan Peele’s Get Out and Us?

You get the fan-made horror trailer “Auntie” created by executive producer Bobby Huntley.

Fans of the 90s hit sitcom The Fresh Prince of Bel-Air have long debated and pondered questions about the show: Which Aunt Viv from The Fresh Prince of Bel-Air do you like better? Why did the original Aunt Viv leave the show? Now, with the help of some creative fans from Atlanta, those questions have an original visual to go with them in the new viral trailer “Auntie.”

After a meeting at Sundance earlier this year, creator Bobby Huntley met with fellow Atlanta based-director Colbie Fray to collaborate on the concept.

“We left Sundance knowing we wanted to work together on something within the near future. A month or so later, I called her late one night and pitched her this idea and without hesitation, she came on board. I really wanted a black woman to take on the director hat of this project, telling this story of a strong character played by two amazing actresses on a TV show we all grew up watching.”

Inspired by Jordan Peele’s Us and Get Out universe and the buzz around another The Fresh Prince of Bel-Air trailer created by Morgan Cooper, the pair began fleshing out the story with Fray’s creative partner Olamma Oparah. Together they created a short script that offered an interesting, Jordan Peele-inspired horror take on the classic comedy, touching on famous moments throughout the show’s six-season history, including the famous unitard dance routine. “Auntie” gives a unique twist into the backstory of Aunt Viv, originally played by Janet Hubert. She was later replaced by Daphne Reid after three seasons.

“We wanted to make sure we touched on as much as possible,” Fray says. “We put a lot of hidden gems in the dialogue, clothing, and actions itself to keep the people watching, again and again, to pick up on them.” They also worked hard to address the ways in which other actresses were replaced on other comparable, classic TV shows. New portrayals of Judy and Harriet Winslow from Family Matters, Becky Conner from Roseanne as well as Claire Kyle from My Wife and Kids make an appearance in this short film. “Auntie” offers a surreal, thriller-tinged look at what happens to these characters/actresses when their roles continue after they’ve been re-cast.

The casting of this project was done secretly throughout Atlanta with the help of upcoming casting director Kayla Daniels, who hand-selected talent out of hundreds of submissions.

After a long, excruciating stint at a mental facility, Vivian Banks is released. Against strict orders from her psychiatrist, she makes her way back to Bel Air. Only to find her home and family has no recollection of her and every evidence of her existence has been erased. She must find out who was behind the hostile takeover before it is too late to reclaim her family and her home.

Huntley is not new to this process, he also helmed the 2015 fan-made “New Edition Story” Trailer that went viral, which led the way for 2016’s hit BET New Edition Biopic. Since then he co-wrote and directed his first feature-length film, La Vie Magnifique de Charlie, which is slated to be released later this year.

From the producers ( Cassondra “Cassie” Beasley, Kayla Daniels, Rita Lamar, Lailaa Brookings ) to the Cinematographer (SCAD Grad Student, Mya Morton), most of the production team were all black women. Huntley felt that this was instrumental to the project, making sure all the right notes were hit in a story about a fictional black woman desperately fighting to win back her family.

“It was amazing to be surrounded by talented Black women while creating this project,” Fray says.”I always strive to seek out female filmmakers first. We are already under-represented but nowadays it’s changing. That’s always my top priority. Anytime I’m shooting, it’s mostly women.”

“Our goal isn’t to pit the two real-life actresses against each,” Huntley says. “They both did an amazing job bringing that character to life in their own unique way. We love every actor and actress affiliated with ‘The Fresh Prince of Bel-Air.’ It’s just human nature to contrast and compare. For people to still debate over 25 years later is really a testament to their talents and longevity. We are just simply asking the question, ‘What If?'”

The 60-second teaser for the project is out now and the full 5-minute trailer will be released on Thursday, October 10th on social media platforms (@auntieshortilm).

‘La Vie Magnifique de Charlie’: Loving Ourselves Is How We Love Our Loved Ones

Will Smith Shares First Trailer From The Fresh Prince Reunion