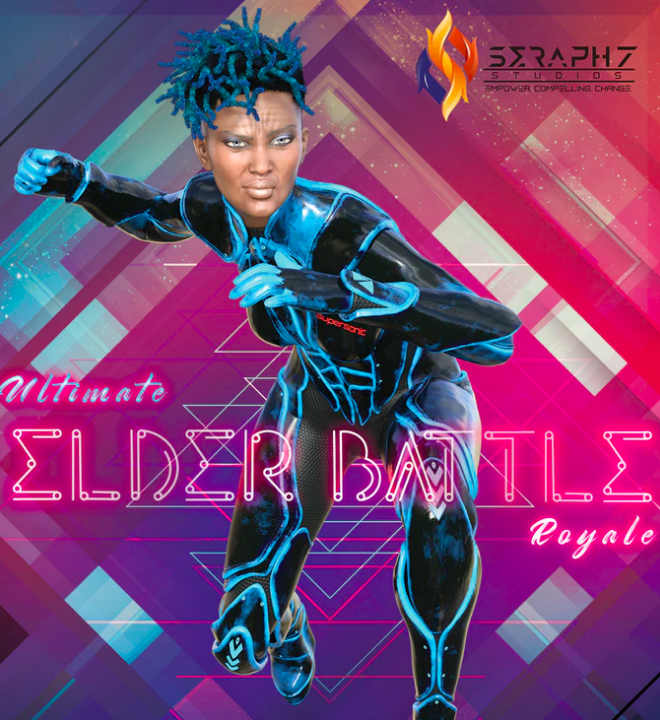 Black women in gaming isn’t anything new, but what Jules Porter is doing in the industry is quite extraordinary.

Ultimate Elder Battle Royale is a video game where elders have superpowers and where one Minnesota Woman intends to be the first Black woman to release a video game for consoles (PlayStation, Nintendo, Xbox).

Seraph 7 Studios, LLC, a new console video game development company, announced plans for a Kickstarter campaign that is set to begin on Thursday, February 27, 2020.  The campaign will fund a video game called Ultimate Elder Battle Royale – a game that asks the question: What if Superheroes aged and Superman was now 83 and living in a retirement community?  In addition to providing weaponized walkers and the opportunity to see elders roundhouse kick people to the moon, this game marks the first in a planned line-up where Seraph 7 Studios promises a hero for every player and educational programs for local students.

“I am very sick of games where people of color are portrayed as gangsters, mobsters, and thugs,” said Jules Porter, founder and president of Seraph 7 Studios.  “I am also sick of games where there is only one underdeveloped token Black character.  When 70-80 percent of people of color play video games and 2.5 billion people play video games across the globe, I just do not understand why only 3 percent of the characters look like us and the ones who do have some level of moral deficiency.”  When asked about the portrayal of women in video games, Porter responds, “Let’s not even start talking about how women are portrayed in various stages of undress.  It is almost infuriating. The video game industry is about 50 years old, and yet women are still portrayed as running into battle half naked.  I am a U.S. Marine Corps veteran, and that portrayal is just crazy.”

Porter, a lawyer and graduate of the University of St. Thomas with a JD and MBA, is a life-long gamer who is now set to become the first Black woman to develop and launch a game on Nintendo Switch, PlayStation 4, and Xbox One.

“Really, the story is personal for me. As a law student, I was able to work as a research assistant for St. Thomas’ Community Justice Project.  That gave me the opportunity to study how media assists us in developing our perceptions of others, as well as ourselves. I have a 12-year old nephew and we like to play video games together. However, I soon realized it was very hard to find a game where the heroes looked like him by design, and it was even harder to find a game with positive and fully clothed women of color.  Video games now have a length of about 60-100 hours. That is a long time for my nephew to play a game where he is not shown as a hero.  It is also a long time for people outside of our community to play a game where we are not heroes.  Imagine the message that sends and the effect it has.”

Porter then decided to create the change she wanted to see.  She realized the poor representation in gaming stemmed from the short supply of people of color and woman who worked as programmers and game executives.  Porter conceived Seraph 7 Studios as a company that makes fresh and fun games where diversity is a seamless and authentic part of the storyline, and that provides an Applied Advanced STEAM (science, technology, engineering, arts, math) course for local high school students.  She entered her idea for a video game development company into local entrepreneurship competitions.  After winning the Fowler Business Concept Challenge and St. Thomas Business Plan Competition at the University of St. Thomas, Porter was a semifinalist in the Minnesota Cup – a statewide entrepreneurship competition.  Porter also auditioned for the TV show, Shark Tank, in early February.  “This was a great experience.  It showed me that others saw value in the company I was envisioning.  My fingers are crossed with hope to make it on Shark Tank one day soon.”

Porter is currently taking time away from her legal career to fully focus on the development of her first game, Ultimate Elder Battle Royale.  “My favorite part about this game is it gives me a chance to work with elders at retirement homes.  I was surprised at how enthusiastic elders are to be voice actors in video games.  They do not have much of a filter which allows for a lot of surprise commentary,” said Porter.  Porter was awarded a Finnovation Fellowship for social entrepreneurship and is a member of their second cohort of fellows. “Thanks to the Finnovation Lab, Bush Foundation, Finnegan’s Brewery, I have mentorship, a supportive community, office space, and the time to develop my first game.”

Seraph 7 Studios’ Kickstarter campaign begins on February 27, 2020 and will last for a month.  Porter is asking supporters to donate and the company is offering an early backer special (copy of the game, digital lore book, and a t-shirt).  Funds from the Kickstarter campaign will go towards hiring additional staff – which means Seraph 7 Studios is hiring!  Porter provided information on upcoming employment opportunities, “Please subscribe to my website which is where job announcements will be posted.  Initially, we are looking for artists, animators, and programmers familiar with the Unreal Development Engine.”