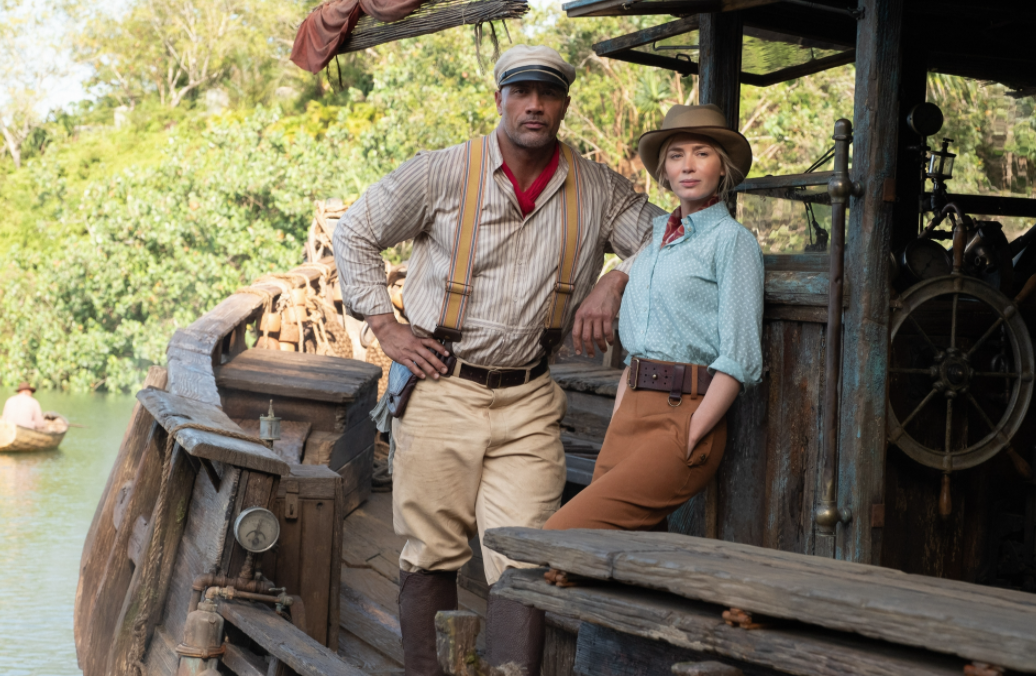 If you’ve been to Disneyland as many times as I have, you are probably familiar with the ins and outs of the Jungle Cruise ride. What shines through the ride isn’t the animatronics, but the silliness of the backside of water and other dad jokes told by our Jungle Cruise skipper. I love a good adventure. I love a good Disney story. There are Disney movies based on rides, or films that have inspired a ride, that have satiated the need for both, like Pirates of the Caribbean, Indiana Jones, The Haunted Mansion, and The Tower of Terror. They all are quirky, fun, and a joy to watch. This is Jungle Cruise (2021).

Based on Disneyland’s theme park ride, this is a movie where a small riverboat takes a group of travelers through a jungle filled with supernatural danger, animals, and reptiles. A curse has created monsters out of those who went looking for eternal life. Decades pass. Set in the early 20th century, riverboat captain Frank Wolff transports British scientist Dr. Lily Houghton and her brother MacGregor on a mission into the jungle to find the Tree of Life. The Tree of Life is believed to possess healing powers that could be beneficial for the masses in modern medicine. On their heels is an imperial German prince who is determined to find the tree first at any cost. The cursed conquistadors who have been hidden in the jungle, are also moving against them.

Jungle Cruise is directed by Jaume Collet-Serra (Orphan, House of Wax) and written by Glenn Ficarra (Focus), John Requa (I Love You Phillip Morris), and Josh Goldstein (The Wayans Bros). It boasts a talented, diverse cast starting with Dwayne “The Rock” Johnson (Jumanji) as Frank, Emily Blunt (A Quiet Place) as Lily, Jack Whitehall (Good Omens) as MacGregor, Edgar Ramirez (American Crime Story) as Aguirre, and Jesse Plemons (Judas and the Black Messiah) as Prince Joachim. Other casting highlights of the film include Paul Giamatti (Billions) as Nilo and Veronica Falcon (Queen of the South) as Trader Sam. On paper, the characters we see in Jungle Cruise are ones we’ve seen before. The strong, loner expeditious type, the clumsy, smart scientist, the spoiled, rich kid. If The Mummy (1999) and Pirates of the Caribbean had a baby, this is it.

What Jungle Cruise does exceedingly well is embolden and strengthen the female characters of the adventure genre. This is a heroine’s journey that is life-enriching. I lost count of how many times Frank asked Lily if she wanted to turn around because it was too dangerous. In the adventure genre, there is an unspoken yet acknowledged expectation that women in this situation must have a good reason to approach “unsafe” spaces. The male, in contrast, needs no justification. Lily is a strong character. She makes up her mind and is not persuaded by men’s doubt in her abilities. Damaged or broken women are so prominent in blockbuster female travel and adventure stories. It’s refreshing to see a female character with unselfish motivations. LIly just wants the opportunity to help as many people as she can. There are no daddy issues, tragic backstory, or running from an ex. Women are reclaiming the adventure story. Blunt plays this role very well. Trader Sam being reimagined as a woman in the film was a great idea. She adds a fun layer to the film and the character. There are some comedic and iconic moments with the top hat; I have found my future cosplay character.

There is a lot of funny dialogue in the film. Obviously, puns lead the way. The film was affectionately labeled, “Pun-gle Cruise” by the cast at the press conference. The Jungle Cruise ride is known for its silly jokes and attempt at “scaring” passengers. The same lines that can be heard on the ride can be found in the film. This brings a high level of nostalgia to the film. Jungle Cruise is one of the oldest rides at Disneyland, having been around since Disneyland first opened in 1955. The film does a great job catering to the various age groups that will indeed watch this film. I don’t know if it’s the deadpan face or because it’s Dwayne Johnson making dad jokes, but it works. At least one person is bound to clap and cheer after the famous line, “…eighth wonder of the world, the backside of water.”

What is great about Jungle Cruise is that it doesn’t take itself too seriously. It knows it’s a movie based on a beloved ride. The action is good, the acting is good. The special effects are your standard Disney CGI moments. It won’t win awards, but it will win the hearts of many from young to old.

Jungle Cruise will be released in theaters and on Disney+ with Premier Access on July 30.