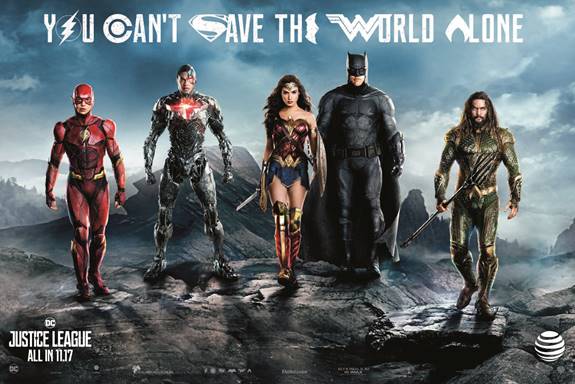 Warner Bros. Pictures and DC Entertainment will team up with AT&T for an unprecedented takeover of its Times Square store from October 5 through 8, to celebrate the upcoming release of Justice League.

As part of this sponsorship, the AT&T store located at 3 Times Square will host an exclusive look at some of the most exciting elements from the action adventure film, well in advance of its November 17 debut in theaters.

And BGN’s own Jamie Broadnax will be there to share the experience with all of you on the Black Girl Nerds social media accounts!

In the middle of it all will be Jamie, bringing you Times Square lit with the faces and costumes of our superpowered heroes! Follow along on the BlackGirlNerds Twitter and Instagram accounts as she live-streams the experience so we can all join!

Fueled by his restored faith in humanity and inspired by Superman’s selfless act, Bruce Wayne enlists the help of his newfound ally, Diana Prince, to face an even greater enemy. Together, Batman and Wonder Woman work quickly to find and recruit a team of metahumans to stand against this newly awakened threat. But despite the formation of this unprecedented league of heroes—Batman, Wonder Woman, Aquaman, Cyborg and The Flash—it may already be too late to save the planet from an assault of catastrophic proportions.

Opening beginning on November 17 in 3D and 2D in select theatres and IMAX, Justice League will be distributed worldwide by Warner Bros. Pictures, a Warner Bros. Entertainment Company.