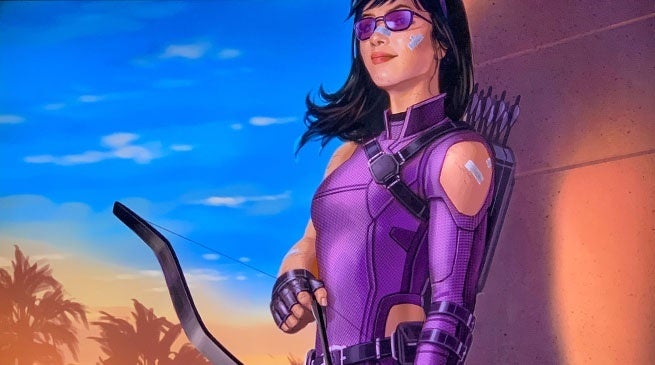 Kate Bishop is a badass. She is the third person to carry the codename Hawkeye and the first woman to do so. Young and without superpowers, she is skilled in archery, martial arts, sword fighting, and boxing. She is unrelenting when it comes to justice. She will fearlessly pursue her target and she will do it with finesse – and lots of sass. If there is an opportunity for a joke, she’ll take the shot. As we anticipate the 2022 premiere of the Hawkeye series on Disney+, here are some facts on Kate Bishop and what we hope to see. 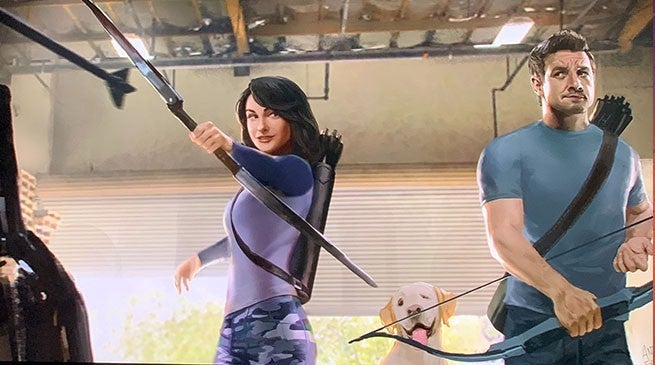 Kate Bishop’s first encounter with the Avengers occurs at a young age after her suspicions grow that her wealthy father, Derek, is actually a villain. She follows her father to a shady meeting and is captured by a low-level villain and is subsequently rescued by the Avengers. She grows to idolize Clint Barton – the other Hawkeye – because he doesn’t have superpowers. Years after her rescue, Kate is attacked while jogging in Central Park. After that traumatic incident, she commits herself to self-defense and combat training. Her next super-hero encounter is with the Young Avengers at her sister’s wedding. When the Young Avenger’s efforts to stop the attempted robbery of wedding guests heads south, Kate steps in with an assist. She later tracks the team down, demonstrates her value to the team against a villain, and joins them as Hawkeye. 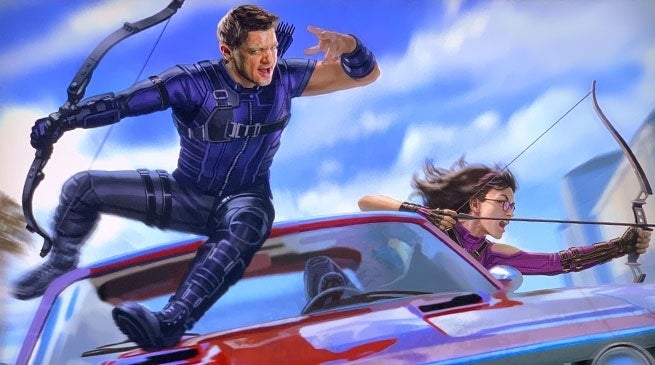 As it turns out, Kate is right about her father. He is not a good guy. Derek Bishop is in partnership with criminal organizations and supervillains. He is even willing to put hits on his own daughter in order to stop her from interfering. Derek may be Kate’s worst enemy as she believes he’s responsible for the presumed death of her mother, Eleanor. Kate is haunted by the last memories of her mother when Eleanor tried to take Kate out of her summer camp early and escape with her. Little at the time, Kate didn’t understand the situation but there was no time to react as Derek ominously showed up. Eleanor realized she’d been caught. Eleanor faked assurance and told Kate she and Derek will both pick her up the next day. That didn’t happen. 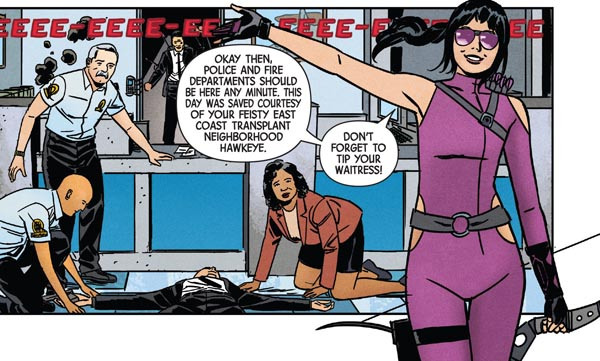 Kate’s allies may be familiar to those who have watched Marvel’s live-action projects across the Marvel Cinematic Universe, Marvel Television, and the films produced by 21st Century Fox. Most notably is her mentor Jessica Jones. When Kate goes solo and moves to Venice, California she becomes both full-time superhero and full-time private investigator – just like Jessica Jones. Kate looks up to her and Jessica is one of the few people Kate confides in about her father. Another ally is Laura Kinney a.k.a. X-23. You know, the violent little girl in the Logan film. In Kate’s solo run in California Laura is an adult. Though Kate isn’t for killing and heavy bloodshed, the two work well together. A less popular ally is Cassie Lang. Yes, daughter of Scott Lang a.k.a. Ant-Man. After her sister’s wedding, Kate teamed up with Cassie to find the Young Avengers where they both joined the team. Historically, there is little crossover between the various live-action Marvel projects.  After all, we did end up with two Quicksilvers. As Disney has purchased 21st Century Fox and Marvel Television has come to an end, we can only hope for a wink and a nod to these other heroines.

Ultimately, Clint is Kate’s biggest ally. The two have a mentor-mentee relationship but they also consider each other family. They get annoyed with each other as any big brother and little sister would. Kate doesn’t always like how Clint handles a situation, but they remain close friends regardless. One thing you can count on is their love for their one-eyed yellow lab, Lucky. He’s a rescue – Clint liberated him from some bad guys – who loves pizza. Pictured in the concept art seen in Disney+ sneak peek documentary Expanding the Universe, Lucky is expected to be in the show.

Also seen in the concept art are palm trees – a symbol of Southern California. As Kate’s solo run takes place in Venice, California, we hope to see Kate and Clint take on smaller crimes in a setting other than disaster-prone New York. The Marvel Television show Runaways takes place across Los Angeles and follows six high school students who learn that their parents are villains. As the teens avoid their parents and discover their special abilities, they find themselves at iconic locations such as Griffith Park and Randy’s Donuts. If Hawkeye takes place in Venice, it is an opportunity to highlight and explore the Los Angeles area further. Besides, the weather is nice. 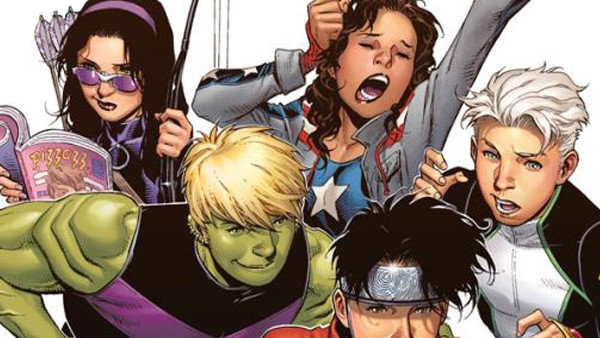 Hawkeye executive producer Trinh Tran stated, “She’s the new, young mentee that he can train to eventually take over the mantle as Hawkeye, one day.” It’s clear Clint doesn’t want to be Hawkeye forever. In Civil War, Clint came out of retirement to break his teammate Wanda out of house arrest. He later joins the fight in Endgame after Natasha a.k.a. Black Widow tracks him down in Tokyo, Japan where he goes by the codename Ronin. Kevin Feige, president of Marvel Studios, promised “[…] we’ll explore more of his time as Ronin in this series.” These clues to the series spur more questions: How do Kate and Clint first meet? Was Kate affected by The Snap? Is Lucky a good boy? Just kidding. We know he is.

However these questions are answered, we’re here for it.