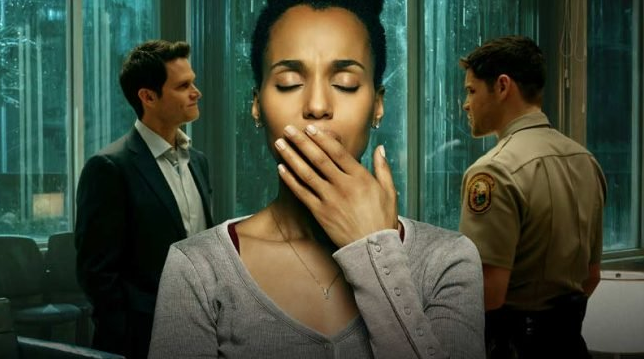 Under the direction of Kenny Leon, American Son brings us a powerful story that leaves no stone unturned as it pertains to an upper-class interracial couple living in Coral Gables, Miami, as time passes and tension builds in a police station as they wait to hear news about the whereabouts of their missing teenage son.

Kendra (Kerry Washington) and Scott (Steven Pasquale), though married, have not seen each other for a while. This fateful night not only places a lens on implicit bias, white privilege, the dynamics of power, wealthy Blacks and the “illusion of safety,” and the experience of wealthy Black boys at predominantly white institutions, but it also depicts a smart, beautiful interracial couple who genuinely love one another and just can’t seem to take the pressure of the presumptions placed on them by society and racial constructs.

In American Son, Kendra has a PhD in psychology and she teaches at a university. She prides herself on quipping that her son has a “prestigious internship” and that he is only one of three non-white kids at an exclusive, predominantly white private school. She has enough trappings and social etiquette to code-switch when needed and can pontificate with the best of the best. Yet, implicit racial bias rears its ugly head in the way that a young white rookie cop (Jeremy Jordan) patronizes her and withholds information from her. Lacking cultural and professional discretion, the young cop projects misguided perceptions onto Kendra about the traits of her son when questioning her about him. From Kendra’s perspective, the young cop’s questions are preposterous. It’s evident that in her adult years she has lived a life removed from the ’hood, yet the way in which the cop talks to her in comparison to her estranged white husband is noticeable.

The young cop in the police station clearly operates out of tunnel vision, and he’s not even aware of it. He can not seem to wrap his head around the idea that a Black teenager may not, in fact, have any warrants or prior run-ins with the law. He’s slow to register that the woman with whom he is talking to is more intelligent than him and in a different class altogether. His lack of social etiquette and sensitivity when discussing cultural and historical information is evident. He asks questions like: “Does he have any gold teeth?” or a “street name?” Yet, his tune quickly changes when a distinguished white man walks into the room. When Kendra’s estranged husband arrives, the young cop says in reference to Kendra that he was trying to keep the “natives at bay”—only to find out that the white man he assumes is the boss is actually Kendra’s husband. It speaks to the notion of how there’s truly a need for genuine white allies in order to really affect social change.

Scott is handsome, dignified, and accomplished. He oozes generations of access and privilege. The young cop feels a comfort in the whiteness or “white construct” of his male counterpart and immediately speaks derogatorily of Kendra in her absence as she’s getting a drink of water. Though their sentiments about Kendra are not the same, the level of comfort that the cop has in bashing Kendra is to be noted. He patronizes her to her face, yet the moment another white male is in the room, he demonizes her character, calls her ghetto, and code-switches quickly.

A Black Mother’s Intuitive Anxiousness When Raising a Black Son

While Kendra’s confessions of fear for her child show that being a mother is universal, we still get a glimpse of the fear that comes along specifically with raising a black son. When the young cop tells her repeatedly to calm down, she asserts, “Do you have a Black son?” “Do you have Black sons?” Of course, his response is no. However, given the context of America’s history and relationship with Black males, the question is loaded. Through Kendra’s exchange with the rookie, it becomes crystal clear that the words “I understand” should not be used loosely, unless in fact you truly do understand. Though she and her husband have spent a very large amount of money on their son’s private school education, surrounding him with privilege and resources, it’s through a long monologue that Scott comes to learn that his Black son’s experience will not be like his own, because in America he is Black.

White Privilege Is Not Enough When Raising a Black Son

Scott, a man with a title, position, and influence, genuinely loves his son, but it takes him a while to realize that despite the benefits of being upper class, educated, and headed to West Point, his son will deal with other sociological delineations that the father, as a white man, never had to. Though at a top private school, their privileged son will also face psychological residue that accompanies being a part of the token few Blacks at otherwise all-white institutions. Scott means well and loves Kendra and his son, yet there is an unspoken divide.

Interracial Couples That Genuinely Love One Another, Yet Are Torn Apart Due to Racial Constructs

Scott, in his estrangement from Kendra, has missed out on this part of their son’s teenage journey — a recent phase of wanting to hang out with more “urban” Black kids, with cornrows and baggy pants. Scott appears to have settled for an affair with less “stress” that conforms more to societal norms. When questioned about his affair, he yells out a heartfelt, “I don’t love her!” It’s clear that he means it. Yet, it seems as if the pressure of racial constructs and what’s expected is caving in on them.