Isolated places are a great place for any story. You have the ability to totally set the rules of a place and the history.  Some really great stories, including many classic literature titles such as like Lord of the Flies and Watership Down deal with how a group of people/bunnies react when the only law is what they make of it.  You know it’s true. How many of you watch the Walking Dead or enjoyed the Maze Runner?

The last comic title I read that spent any time on this was Tony Puryear and Erika Alexander’s Concrete Park R-E-S-P-E-C-T (Dark Horse Originals). From Titan Publishing, writer Stéphane Louis (Husk-2010) with artist Valentin Sécher (The Metabaron) bring us Khaal. 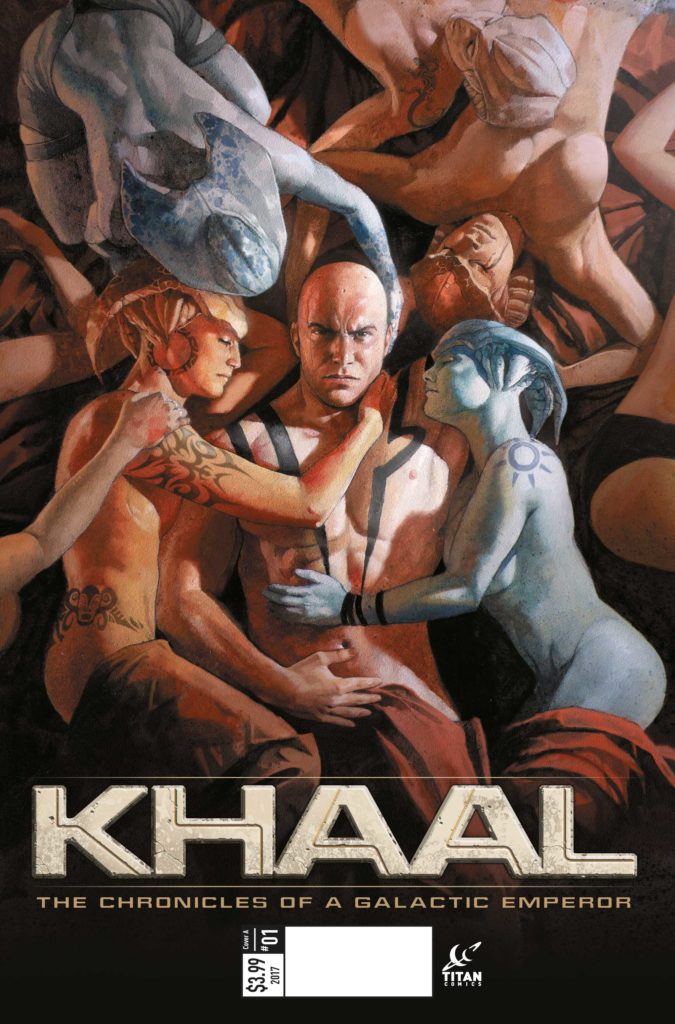 If you feel like doing the Shatner scream “Khaaaaaaan!” from Star Trek II: The Wrath of Khan, go ahead, it is fitting.

All that is left of an ancient empire is a prison ship, the Empyreon. The inhabitants are all the descendants of those prisoners, long-since dead.  Out of the prisoners, arose a society with three races — Humans, Psis, and the Ethereals — vying for the meager scraps available on their floating world. The Humans are led by a great warrior but a merciless leader known as Khaal. The Ethereals are led by their Supreme Leader, Soryann Khur. They favor humans in form but can move through walls and have tails. Lastly, the Psis are a telepathic lizard-like race, (think the lizards from Flash Gordon) and their clan leader is Ssi Lakh. 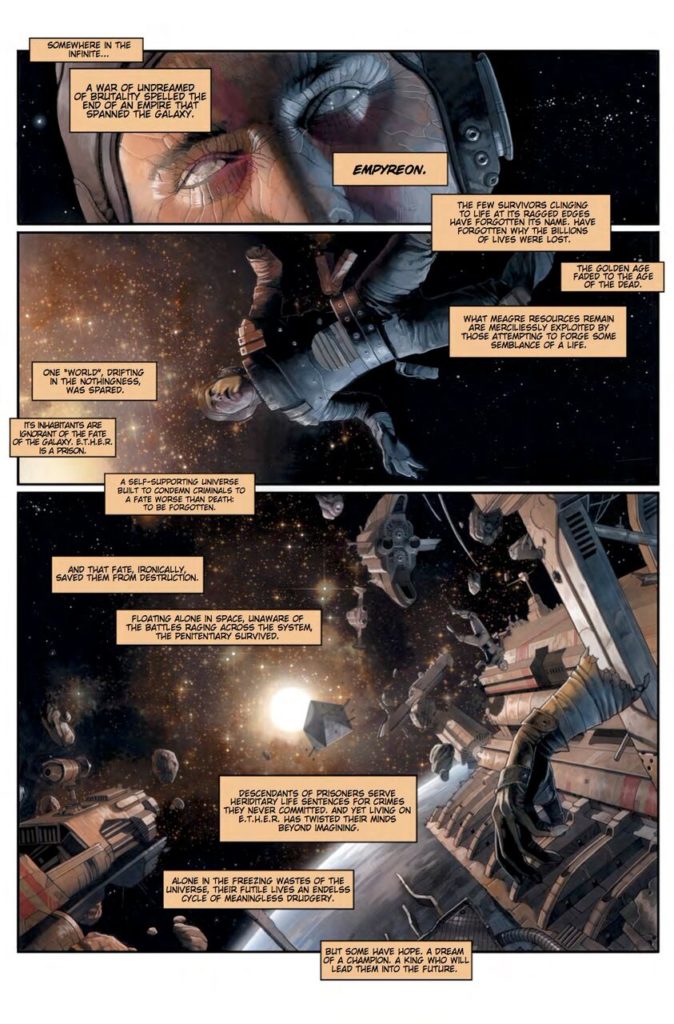 In the first issue, we find Khaal dealing with all the intrigue that one would expect of any rules whose first and seemingly only hold over his people is fear. The first several pages are full of Khaal pressing home that point.  As the issue proceeds, the seeds of an alliance are planted between Ssi Lakh of the telepaths and Soryann Khur of the Ethereals. Naturally, both races are distrustful of the other, but they hate Khaal more. The enemy of my enemy is my friend? 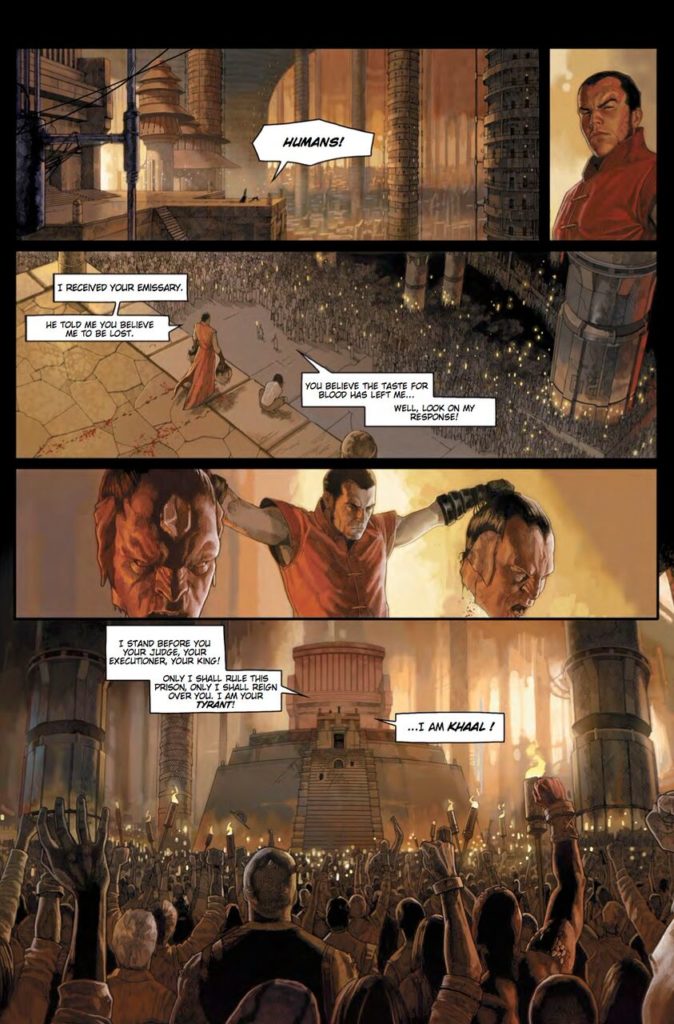 This is a book presented with soft colors for a very violent title. The extent of the station is not revealed, but it is evident that the station is large, and is the one thing that ties them all together. Interestingly enough, a member of each race is necessary to maintain the essentials for living on board the ship.  Therefore, exterminating a race means exterminating yourselves.  Of late, I have seen a lot of titles where the art and the story are unbalanced, the joy of a good comic is not noticing either. 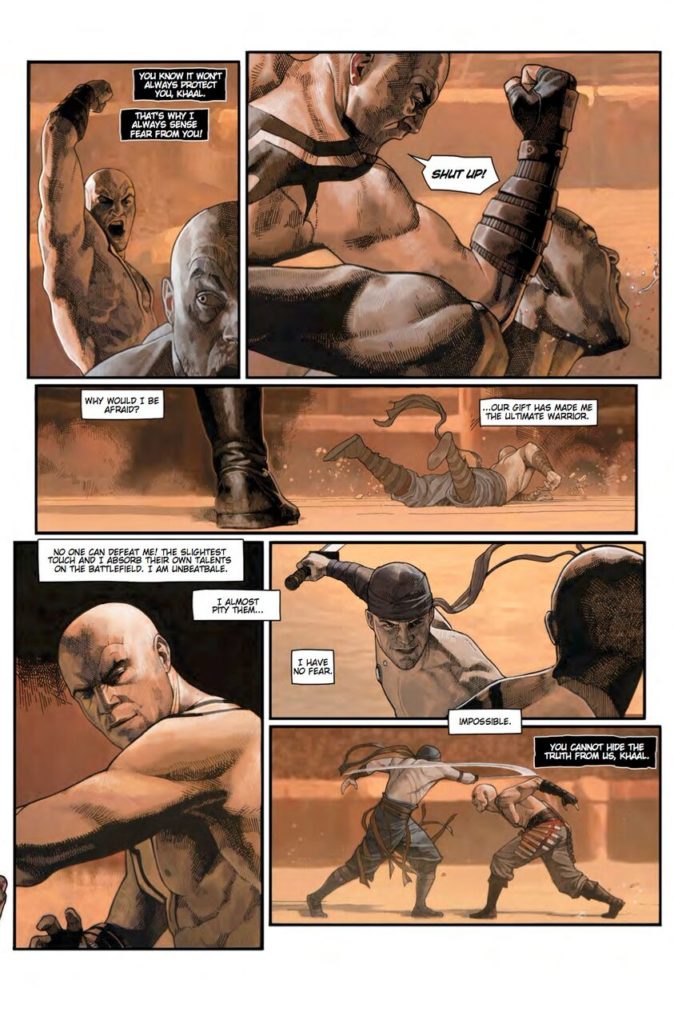 The storytelling is seamless with the art being a careful counterbalance to the writing. I know the title talks of one character, but I think the strength of this title is due to all those who will try to depose him. Of the few independent titles, I am reading now, Khaal is definitely on my list. There is a real beauty to this story, despite the struggles, that gently draws you into to this very violent world. I’ve heard of some lesser comic works issued of late that are headed for the movies.  This is one that is actually worthy.