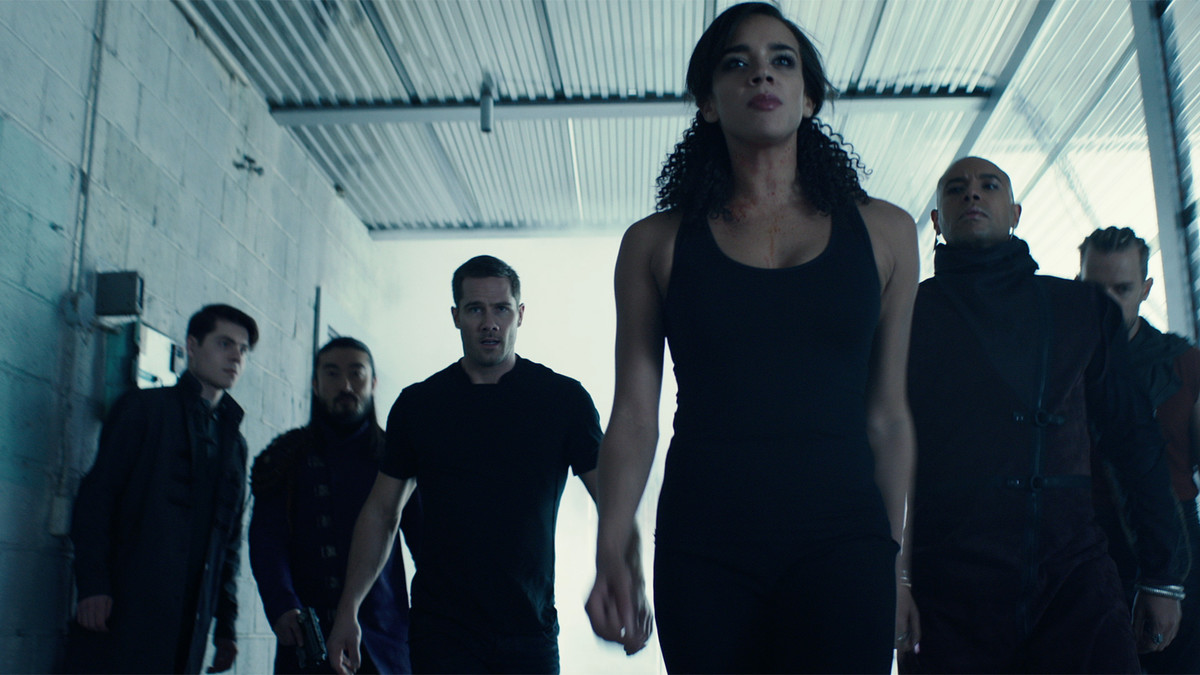 Dutch declared war last season, so this season we’re going to see her fight it. She cuts a formidable figure even as she’s being frog-marched by a drone across a desolate landscape toward a hullen hive. Dutch and D’av’s strategy here is slightly reminiscent of the pilot when Dutch and Johnny used a bit of misdirection to infiltrate an enemy building.

We don’t have to wait too long to see the new and improved Team Awesome Force in action. The early humor that I mentioned in my Season 3 preview is the part after D’av has subdued the guard and opened the fortress door. Dutch, Fancy, Alvis, and Pree have mere moments to breach the opening before it shuts. Pree, laboriously pulling up the rear says, “This better be worth the chafing!”

We have achieved season 3, my friends.

I am so glad Turin didn’t die when Khlyen skewered him back in the first season. His relationship with the team is golden. He went from being a potential bad guy to their Bosley. He has a moral compass that generally points in the right direction. Of course, when the protagonists make friends with an antagonist, a new contender needs to step up to the plate.

Banyon Grey is an intriguing figure. Dutch just assumes she’s hullen and wants to kill her. Turin admonishes her with a, “Whoa there, Assassin Barbie! This is your response to our new overlords, murder?” Hilarious yes, but it also offers a good point: the Quad has been a bit of a mess for the past two years with the Company’s shenanigans and now the missing agents. It makes sense if Grey is exactly as she seems, a middle management hardass tasked with whipping these hooligans from the armpit of the J into shape.

I hope Turin can keep his job under the new oversight because he comes up with cunning plans on the fly. You kind of take it at face value that Turin directed Dutch and D’av to kidnapping Pippin for his contacts, as stated. But when he figures out that they purposely sought him out knowing he’d mess up and get them captured, Turin’s grin at the Royale makes far more sense.

I like Pippin, I think he’s adorable actually. If the writing or performance were just a hair’s width different, there’s no guarantee I would like him at all. He has a a vulnerability and earnestness to him under the cloak of disreputable twitchiness.

I’m glad that Johnny’s story did not completely veer off the path of the main story. He’s experiencing things from a totally different perspective in Rat City, but he’s still sending intel back to the team so that’s good. I was expecting him to have disappeared from their lives for a bit.

Oli and Johnny have great chemistry together. They’re in a bit of a unique pickle but both could go pro if wisecracking were a competitive sport. By the time they share their “dark talk” before bed, it feels earned because we’ve seen them go from being at odds to having each other’s backs while they unravel the latest developments in the hullen horror show that’s become Johnny’s life.

Overall, there is a more confidence and coherence in the writing. I honestly didn’t mind the plasma being an all-purpose wonder goo last season. D’av can control it and make heads explode and moss creatures dance and float rocks. Oh, and all of this is because the military (which military I was never quite sure) put a mind control shunt in his brain at some point. Sure, fine. I’ll go with it. But this year I appreciate that we’re exploring its presence as a parasite carrier that supplants the will of its human hosts.

It begs the question if it’s not sentient until it binds to a host like Khlyen said last season, what is its motivation? Is its core function just to spread and proliferate? If so, I’m having an even harder time dealing with that one hullen agreeing to strap a bomb to his neck just to deliver a pointless message to Dutch in the cold open.

Even the new use for the plasma seems connected to its function as a parasite. We don’t know what it all means now, but it doesn’t look good. Johnny looks pissed as he carries his new friend through the streets. Looks like there’s going to be fireworks next week.