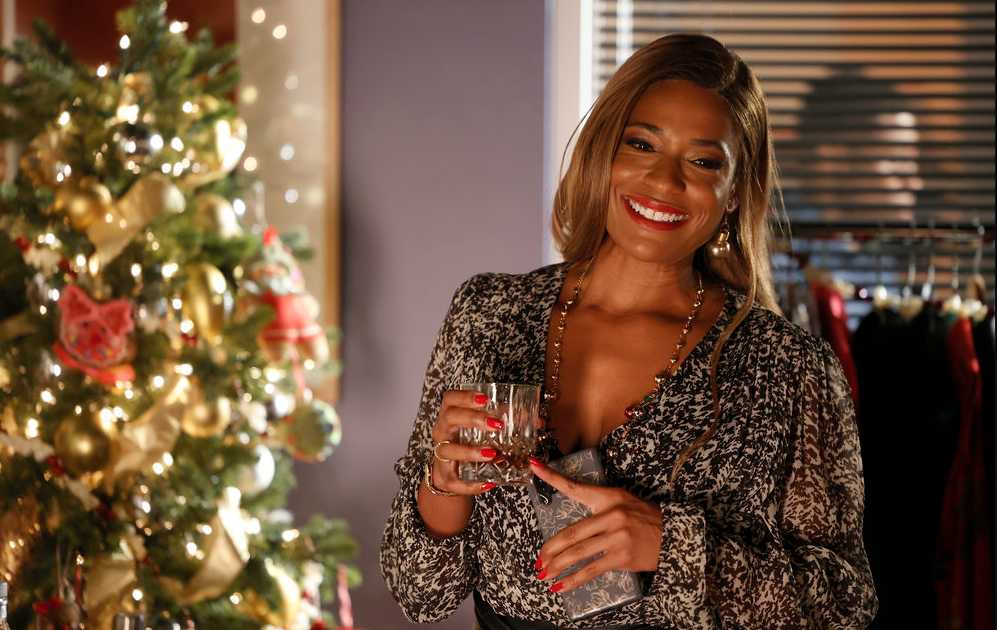 Kimrie Lewis plays Mika, the executive producer of the show who deftly manages an eclectic group of morning show personalities with compassion and humor. In season 2, Kenan is settling into life as a single dad as Mika and Kenan’s friendship deepens. Kimrie Lewis spent two seasons on the ABC Comedy Single Parents as Poppy Banks and had a recurring role on Shonda Rimes’ groundbreaking series Scandal for five seasons. Lewis is a graduate of the Tisch School of the Arts at NYU and London’s Royal Academy of Dramatic Art with a long list of TV credits under her belt.  In addition to acting, Ms. Lewis is a writer, director, and stand-up comedian. BGN spoke with Kimrie Lewis via zoom about her background, process, and Season two of Kenan.

She’s like so many of my friends who are about their life. They are super dedicated to their jobs, and as a result, their personal lives are trash. It’s nice being able to reflect real life in that way and to honor my mom, who was a morning news show producer. I learned so much from watching her and now being able to play her is such a treat and an honor.

NYU’s Tisch School of the Arts and London’s Royal Academy of Dramatic Arts are both prestigious theater programs. How has your training helped the trajectory of your career and what’s the most positive impact it’s had on you?

[Laughs] Thank you for reminding me of all that money I paid. I will say the thing that it’s done for me has made me feel prepared. I’ve studied and worked for a long time, so being on a show like this, where you’re working with seasoned veterans, it just reminds you that you belong. You’re supposed to be here. A lot of Black women struggle with impostor syndrome. It’s nice to have been able to have earned an education. I couldn’t recommend it more to folks, especially going abroad. There’s something about being on another continent, or even, going to different schools, doing a semester at Spelman, or whatever, allows you to learn through a different lens and learn about yourself in the process. While I was in London, I had a homegirl, who was in Italy at the time, and I got to go there, and then we went to Paris and in Spain. Having those experiences, especially when you’re young, I think it’s important if you can do it.

Talk to me about the chemistry of the cast of Kenan and how that impacts the flow of the show.

Yeah, it’s ridiculous our chemistry is just something special.  I am so grateful. You can’t even pay for this kind of chemistry. People try to but everyone on the show is so talented, it’s like a who’s who of what they do on our set every day. When you’re coming to work with that level of professionalism, it just makes you step up your game. Nobody wants to be the weak link. So we’re all coming prepared and ready to play. It’s the best of both worlds.

How did it feel when you finally were able to feel like you were holding your own?

You’re scared most of the time when you’re going into these kinds of situations, because of, like I said, the whole imposter syndrome, and also, because you’ve been able to see their work for so long. But what I try to remind myself is even though folks haven’t seen as much of my work as my peers, I’ve still been working. I ain’t new to this. I’ve been around for a minute. And I belong there just as much everyone else on the show does. And I have to trust that folks like Lorne Michaels, who is the executive producer on this show, know what they’re doing when they’re bringing this cast of characters together. I try to remind myself about that. Whenever I get into those pockets, because let’s keep it real, we all fall into those areas every now and then. But the more you do it, the easier it gets. It’s like a muscle, it’s like riding a bike. I belong here. It’s like a meditation. I try to tell myself that it is a regular practice. Because, if not, you can easily fall into feeling like you’re less than or like you don’t belong, and that’s certainly not the case.

So, self-care is a factor.

Yes, so much self-care.

What’s your favorite form of self-care?

I mean, I’m a Black woman in America. So I will use all of them. I meditate, I do yoga. I have a yoga mat that’s nice and cushiony. You can’t get that thin one, we got junk in our trunk, and if you’re gonna be there for a while you want to be comfortable. I use my yoga mat to meditate, do yoga and I set intentions for myself. I try to say them to myself in the mirror every day before I go to work. I need all of that. And I’m in therapy.

Right? Get you a Black therapist who can really relate to you and understand the challenges that you’re going through.

It’s lovely seeing Black folks, (and Don Johnson, I have loved Don Johnson since high school) on TV unapologetically owning their joy space. For you, what right now is bringing you the most joy?

The most joy I have to say right now is being able to share this show with my friends and family. It’s a show that I am so proud of, it’s a show that I’m so excited to show up to work for every day. And it’s a show where my friends and family are reflected on screen. I don’t know how many other times this will happen in my career. So being able to share now, the moments, the laughs that we have with ourselves, at Thanksgiving or, just walking with my girls, being able to reflect that reality on camera is so special, it’s truly an honor. And so that means the most to me right now, and brings me the most joy.

Kenan returns for season two with two episodes on January 3 at 8:00 p.m. ET/PT  and at 8:30 p.m. ET/PT on NBC. Kenan episodes are available the next day to stream on Peacock and Hulu.