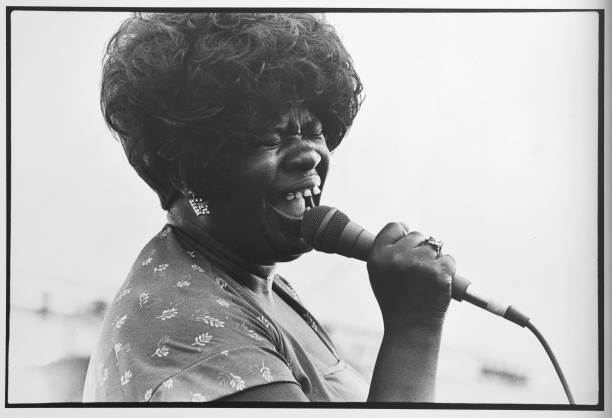 One day I was listening to a pre-made playlist from Spotify, and I heard this jaw-dropping voice streaming through my headphones. The voice erupted from their soul, penetrated my eardrums, and sunk into my bones. This singer had an impressive vocal range that allowed her to hit low notes that produced a somewhat gargling sound. A singer, unlike any other artist I’ve heard before.

When I looked to see who I was listening to, the name Koko Taylor appeared. A name that wasn’t familiar to me. From that moment, I wanted to hear more from her, but I also wanted to know more about her. A similar moment of astonishment happened when I learned about Sister Rosetta Tharpe, The Godmother of Rock and Roll. It brings me great joy to not only re-discover but share about Black women in music whose fame and importance are not well known. Here is more about Koko Taylor, the Queen of the Blues.

As stunning as the name Koko is, Taylor was born September 28, 1928, with the name, Cora Walton. She took on the nickname of Koko because of her love for chocolate. She grew up on a sharecropper’s farm outside of Memphis, TN where she developed her love for music.

While she and her brothers and sisters worked on the farm, picking cotton and chopping wood, she found her rest and restoration in music. She would spend Sundays singing Gospel at the church. On other days, she would sing with her siblings as they played their homemade instruments. But listening to the Blues was forbidden. Her father said that the blues was devil music, so she would sneak behind the farm to listen to the blues on the radio.

“Blues has always been on the backburner all my life… the blues music is just as good to listen to like any other music,” Koko Taylor.

When Taylor reached 21 years old, she decided with “thirty-five cents and a box of Ritz Crackers” to leave for Chicago. She went with her future husband Robert, Pops, Taylor, who supported her music interest. While in the big city, she started cleaning houses during the day and frequented popular blues clubs at night. There she would sit in with popular bands until one day she was discovered.

Becoming the Queen of the Blues

In 1962 composer Wille Dixon approached her after her performance in a nightclub. It was then that Dixon spoke his infamous words that started Taylor’s career. “I love the way you sound. We got plenty of men out here singing the blues, but the world needs a woman like you with your voice to sing the blues.”

Shortly after Dixon signed Taylor to Chess Records, and in 1965 she released her signature hit song: “Wang Dang Doodle” — a song that was first recorded in 1960 by Howlin’ Wolf. Yet it was Taylor’s rendition that took it to #4 on the Billboard magazine’s Rhythm and Blues Charts and sold over a million copies. Taylor’s voice and talent brought this song into the “Singles or Albums” category of the Blues Foundation Hall of Fame in 1995.

With her contract from Chess records, Taylor began performing all over. A process that she was nervous about in the beginning. She would be so scared she would close her eyes on stage. With practice, she got comfortable performing and singing for live audiences across the country.

Taylor stayed with Chess records for about nine years until the company closed down. This didn’t stop Taylor’s career, as she was signed by Alligator records which became America’s most prominent Blues label. Her debut of the song “I Got What It Takes, helped her earn her first Grammy nomination.

She would later go on to receive over nine other Grammy nominations. Winning her first Grammy in 1985 in the Best Traditional Blues Recording for “Blues Explosion.” Amongst these awards, she has won many W.C. Handy Awards for Best Contemporary Female Artist.

To drive it all home, the Mayor of Chicago, Richard M. Daley, presented Taylor with the “Legend of the Year” award in 1993. This led to a string of other major accomplishments such as her induction into the Blues Foundation’s Hall of Fame in 1997. She was the first female Black blues artist to be inducted. And her most coveted award was the Blues Foundation Lifetime Achievement Award in 1999.
In fact, Taylor has won more Blues Music Awards for Traditional Female Blues Artists of the Year, more than any other artist, with 29 awards in total.

While learning about her string of accomplishments and her impact on Blues music, I came across an interview she did on the radio program Retrospectives on Casey Radio in Melbourne, Australia, and got to learn more about Taylor as an artist and a person.

Her dedication to Blues music

In the interview, she spoke slow and intentional about the importance and influence of Blues music. She mentions that “Blues is the Black people’s heritage, it’s a memory, and it all started from slavery… a lot of people look down on it because of that.” Taylor shared.

Throughout her music career, she’s noticed a shift in which genres of music get played on the radio. And although she noticed the slow decline in plays of Blues music on the air, Taylor reminds us that “all music comes from the Blues.”
She honored Blues music but stayed dedicated and genuine. She wrote songs for herself. “My heart is into every lyric that comes out of my mouth. I want to make the song interesting and sound good to me. It’s first got to make me feel good, I’m the one singing it.”

One of the most important messages she shared during this interview was about pursuing a dream. She said, “Don’t expect things to happen the day you start. I’ve been at this for 32 years, and I’m not trying to be nobody else, I just do what I do, do it the way I do and there it is.”