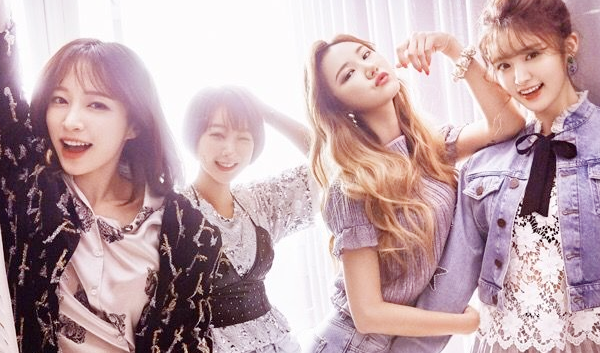 “Sleep Tight” is the latest from Kisum, who dropped her EP, The Sun, The Moon. Kisum was a contestant on both Show Me The Money and Unpretty Rapstar and seems to be apart of the new generation of female Korean MC’s. Honestly, her flow isn’t my style but the music video as cute.

My former favorite maknae, Minzy, released her debut solo single, “NiNaNo,” and her debut EP, Minzy Work 01: Uno. While I appreciated the production and the thought that went into this release, it also made me very aware of how much I preferred Minzy in a group setting. I realized I do not prefer her voice in large doses because her singing feels flat and emotionless. As a performer with many years of experience behind her, she does a solid job of hitting the right notes and doing the right moves but I wish it felt less robotic. Hopefully, this is due to solo nerves and once she’s comfortable on stage and as a solo star, she’ll shine like she used to with 2NE1.

Yesung from Super Junior released a single, but that’s not why I’m talking about him. He recently re-published an old video of him in blackface because apparently posting it once wasn’t enough. Obviously, there was backlash and — at this time — he has yet to comment but his fellow SuJu member, Henry, did come to his defense by displaying his frustration at the ridiculous label of blackface: “If darkening your skin to portray a black person is blackface, then so is wearing a blonde wig!” I think he might have been referring to Chris Hemsworth with that comment. Yes, this is really something that Henry has said. Henry, who was born and raised in Canada, and definitely knows better. The general excuse of Korea’s homogeny and close-mindedness doesn’t work here so Henry is in fact just being a giant racist-moron.

I was going to review Dia’s comeback (“Will You Go Out With Me”), but I’m feeling bitter about MBK’s treatment of T-ara as they try to make Dia happen. All you need to know is that while I appreciate their initiative at self-composing, they should have gone with an established writer. The rapping/speaking parts were good but then the instrumental kicked in and everything got very loud. I’ll get to T-ara near the end.

Exid returned as a 4 member group due to Solji’s hyperthyroidism and many were worried they would not be able to succeed commercially without their lead vocalist. Never fear as Hyelim aka Potato stepped right into that lead position and has not let any of us down. The title is called “Night Rather Than Day” for their new mini, Eclipse, and it is a groovy request for their lover to see them at night rather than during the day to “get it on”. The mini includes solo’s for both Hani and LE but the standout single is “Boy.” There was a minor controversy where some felt “Boy” was too similar to a Marian Hill song, but I honestly don’t hear it. I wouldn’t say this comeback was one of their more successful one’s post “Up and Down,” but I did feel that their mini was a solid release that didn’t try to conform to what was popular in the industry.

Lee Hae Ri’s solo, “Pattern,” is the perfect ‘90s song. She understands the limitations needed with this type of song and instead of power she used tonal changes to add color to her voice. The bass and the “geunyang noha beoryeo noha beoryeo “ are especially infectious. The video isn’t giving us anything new but It doesn’t distract from the song at all. “Hate That I Miss You” is one of the best examples of how language is no barrier to knowing the heart and soul of music. The heartbreak and longing is tangible. I will definitely check out the rest of her mini album, h.

I’ve got complicated feelings about Zico, but I’m less conflicted about his latest single, “She’s A Baby.” I like it even with the odd lyrical choices (though this may be a translation issue). The instrumental changes and the soft addition of Dean work to keep my attention and I never find myself feeling bored while listening to this song. It also hasn’t been confirmed if he wrote it for Seolhyun but he seems very sensitive so he probably did.

Troublemaker died so that Cube could introduce us to Triple H, their new co-ed subunit featuring Pentagon bae’s Hui and E’Dawn and the savior of Cube/former Wonder Girl/4Minute member, Hyuna. They released the Bruno Mars cover “Fresh” with a video meant to shock more than entertain. The music video is a dark look at adolescence suffering. There’s violence! Threesomes! Suicide! Murder! I wouldn’t be surprised if they had to stick to a checklist when creating the script. The song is catchy because it’s basically the Korean version of “Uptown Funk.” If they were going to try a new subunit, they should have come correct with an original concept. The only saving grace is that Hyuna’s new body has settled quite nicely.

Super Group aka The Nation’s Girl Group Twice released the ear worm “Signal” and I am finding  I love everything they release! “Signal” is a hand-clapping, feet-stomping good time. I saw criticism calling the song all filler and I would disagree. It only appears to be the case because every lyric sticks whereas most songs have only 1 or 2 parts that stick in the same way. JYP (minus the whisper) collaborated with the girls for the first time to craft a pop masterpiece.

The legends that are T-ara were supposed to have their last comeback as a 6-member group with MBKE, but due to what I can only assume is MBKE’s pettiness, this comeback was pushed back. Meaning, if it does happen, it will happen AFTER Soyeon and Boram’s contracts have expired. Their last comeback as the true version of T-ara was Tiamo, which was a good but not what I would have preferred to be their swan song. We were also promised a medley of their greatest hits AND a Jiyeon comeback. None of which looks like it’s going to happen.

Then there was the additional drama of MBKE trying to throw the girls under the bus which no one (not even netizens) were buying. Their Taipei concert was scheduled after the contract expiration and MBKE tried to spin it that Soyeon and Boram had gone into radio silence and would not be at the concert. Not only were they there, but there were vcrs that had been filmed in advance for this concert that included Soyeon and Boram.

Wonder Girls: Where are they now?

Sunmi has signed on with MakeUs Entertainment after choosing not to re-sign with JYP Entertainment. She hasn’t released any new music since but has been quite active on social media.

Yubin had removed herself from the public eye to deal with the death of her father. While on hiatus, she resigned with JYPE. She has since returned to Instagram and is currently in Bali for a photo shoot.

Hyelim also resigned with JYPE and is back at school. Her Instagram is full of photos on campus as she adds to her growing language skills.

Ye-eun has finally revealed to have signed with Amoeba Culture even though they gave a rather hesitance statement when people speculated about it a couple of months ago. She is their first female solo act and it seems like a great place for a creative soul like hers. Yenny was also in Canada visiting former WG leader Sunye, who was celebrating her daughter’s first birthday. She also released music! I mention a single above and she wrote “Only You” for Twice’s latest mini album AND released the chill track “Thru The Sky.” Unfortunately, she did break up with her 2AM boyfriend of 3 years but didn’t seem bothered by it when she reunited with Joe Jonas and his group DNCE.

Natandy lives in the 6 but has regrettably never met Drake. She loves Kpop, comic book movies and her favorite genre to read, write and watch is fantasy. You can find her on Twitter (@ashleyt17) where she is constantly confused about How To Get Away With Murder and gushing about Kpop/K dramas.