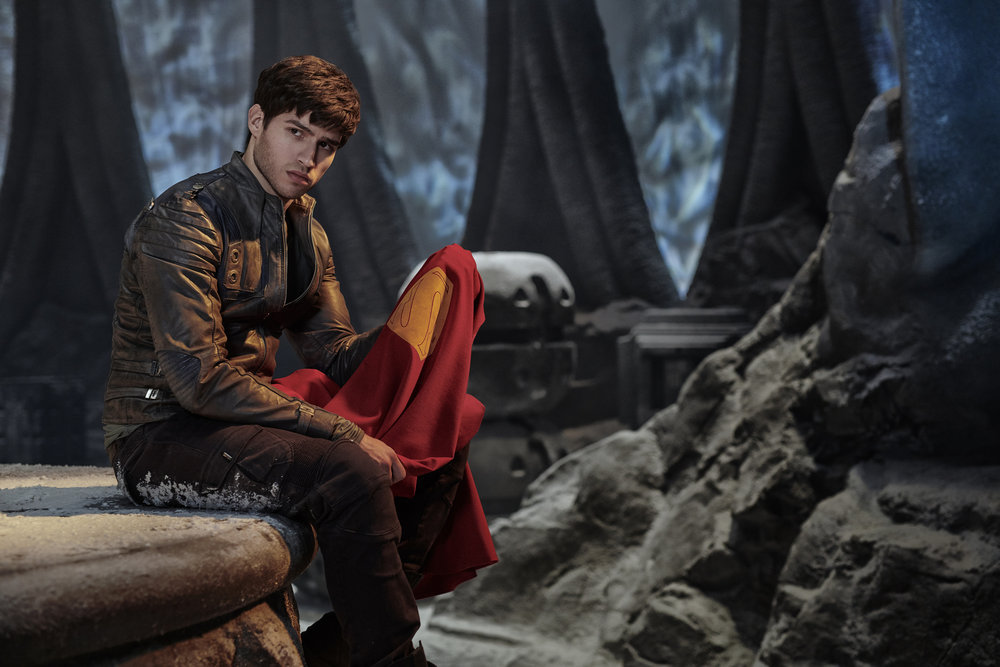 SYFY’s Krypton is the newest arrival to superhero TV. The show spotlights Superman’s birth-planet and provides an intricate hometown origin for a world many viewers may have forgotten. The only problem is, the superheroes aren’t there, at least not the way we remember them.

We’ve seen Krypton before, in movie snippets, in episodes of animated television, in the comics, but on SYFY, the stellar graphics of this technologically-gifted planet glisten under an unfamiliar sun. In the capital city of Kandor, an oppressive social regime and faction system divide Kryptonians according to the will of the political elite, the House of Vex and the god-like Voice of Rao. When we and time-traveling Earthling Adam Strange drop in on the famed House of El, it is Seg-El, Superman’s grandfather (played by Cameron Cuffe) who has a family — and a world — to protect. In fact, Superman doesn’t make an appearance at all except in the form of a characteristic red cape, brought back from the future, slowly disintegrating to mark the planet’s impending doom.

This, people, is episode one!

But beyond Brainiac, time-travel, and intergalactic threats to humanity, Krypton is fighting battles all its own. While Sel-El tries to restore rank to his politically disgraced House of El, elsewhere in Kandor, the Zod household spars over family values and their shared obligation to the state. As in they literally spar. Lyta Zod, played by Georgina Campbell and mother Jayna-Zod, played by Anne Ogbomo — who viewers may remember from her time as the Amazonian warrior Phillippus in Wonder Woman and Justice League — serve as warrior and commander in Kandor’s armed forces. In and out of uniform, they poke at each other’s scars, argue the limits of their promise to protect, proclaim on principle to show no mercy and stun as woman warriors whose occasional weaknesses of vulnerability and compassion create huge moments of strength. Add to the mix that Lyta-Zod and Seg-El share a forbidden love and there’s enough content there to last the season. Though the Zods are not always in Krypton’s limelight, theirs is a story worth watching.

But even beyond current impending threats to the planet, what we know of Krypton is that eventually, it is a world destroyed. Its fate is one that most superhero movies fight, struggle, and bleed to thwart, often in 120-minute sagas. Despite this prior knowledge, Krypton seems to say there’s no point in assuming just when that end will come. Much of the show will seem familiar to viewers in some capacity: star-crossed lovers, a planet in peril, the fallibility of a huge bureaucracy, the triumph of humanity over a faceless evil, but there’s also, um, treason? And ageless family secrets. And kick-ass black women. And it continues a narrative trend we’ve already begun to ask: “What’s a world without Superman to save it?”

In response, SYFY’s Krypton fills our faded memory of the planet’s past with the vibrant color of its present and the result is a beautiful world that was. For these Kryptonians, there’s more at stake than just a legacy to protect, but a future, our future, to defend.