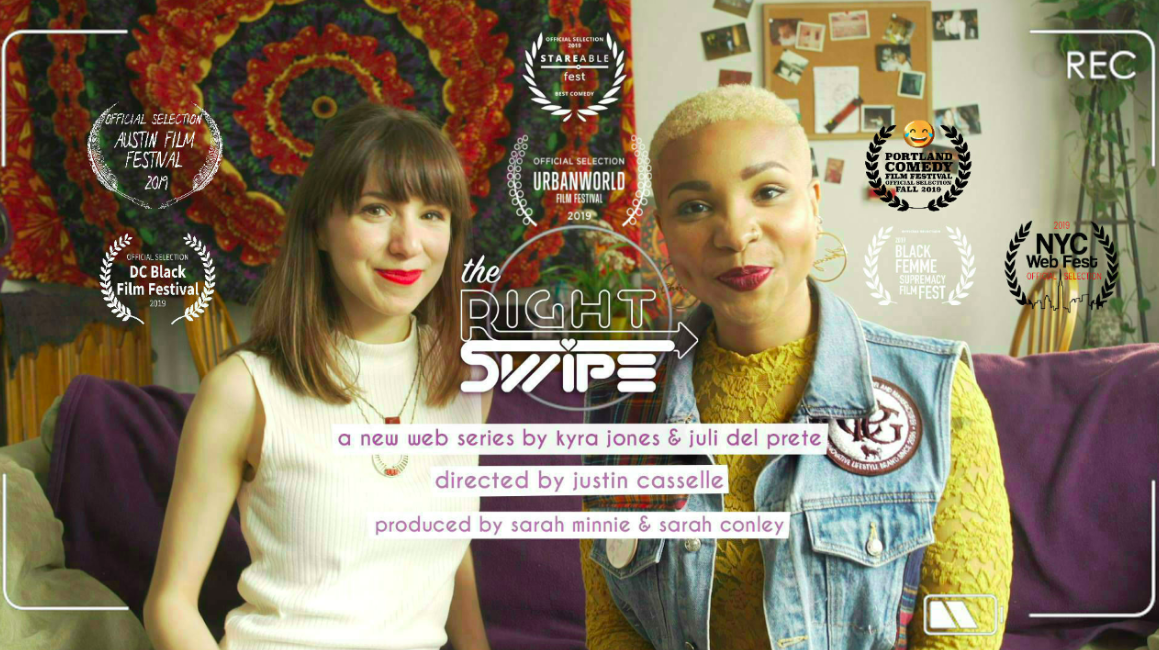 Kyra Jones is the co-creator of The Right Swipe.

This web series has a lot to offer many marginalized communities with its diverse representation and inclusion of sexualities. I recently had the chance to communicate with Kyra Jones about her achievements, her life, and a little about her nerdy side.

Jones is making a name for herself as she starred in the Kappa Force series as well as the series Seeds. She stays busy and active in her community and in her professional life. So, when she had time, I jumped at the opportunity of being able to discuss her latest project.

Special attention to detail is what makes Jones’s work so entertaining. It’s what has pushed her performances in the series she is in. Her work is influenced by what is going on in the culture. This is what makes her work is so relevant. Here are a few things she had to say about her experiences.

What made you pursue show creating?

I started my career as an actor and was frustrated by the roles that were available to Black women. I always enjoyed writing and wanted to have more agency in how stories about Black women and people of other marginalized identities are told, so creating a web series seemed like a great, accessible way to do that.

What roadblocks did you faced when you were starting out?

Definitely money, which is still a roadblock (hence why we only have two episodes). No one on the production team comes from wealth or has a rich uncle we can hit up for production funds, so we have had to hustle to make the show happen and ensure all of our artists are paid. We’ve won a few grants, crowdfunded over $25K, and we were able to get all our camera equipment donated.

What is your greatest achievement to date?

I think just producing a show that so many people across identities and demographics connect with. We have fans of all genders, races, sexualities, incomes — even people my parents’ age who have never even seen a dating app before are into the show and invested in the characters. But getting messages from women and queer people of color about how much seeing people who look like them on screen means to them has been the most rewarding, even more so than getting into film festivals.

Why do your shows always feel so comical?

I think comedy is a great, accessible way to talk about real issues. I write and perform in many different genres, but comedy is my favorite. Especially when shows have narratives or themes rooted in social justice, it can be heavy to watch a dramatic representation of those issues. Playing up the humor in how we relate to one another is really effective.

How do you pick yourself up after a failed project?

I try to remember that failure is always a learning experience. I also like to remind myself that every artist I admire has gone through major failures and setbacks before they have gotten to where they are. Sometimes I read interviews, tweets, and books by Issa Rae, Ava DuVernay, or other people I look up to as a reminder of that.

Can you tell us a funny anecdote regarding your co-star?

Juli and I are best friends in real life, so we have so many wild stories. But most recently, we got cast to be in a commercial together playing a lesbian couple because the people casting it saw the trailer for The Right Swipe and loved our chemistry so much.

Do you have any advice for young show makers out there?

Write the show. Just do it. Get a first draft out then go back and do research later. Screenwriters love to do research for their script and use that as a way to procrastinate writing it. Just get the bones of the story going so you have something to show folks, then make edits later.

Which show has inspired you the most?

Insecure! The show is so unique, hilarious, and vulnerable. The characters feel like real people with real flaws. Issa and her staff are so great and covering social issues in such a nuanced way.

Which book would you love to make a film out of one day?

The kind, funny, and smart Kyra Jones is a triple threat. Actor, writer, and creator of a web series would be impressive enough for anyone, but to go as far as to insist on being inclusive of individuals who do not get to see themselves reflected in media is a whole other ball park. To not discuss this aspect of her work would downplay all the great work she is doing for many communities.