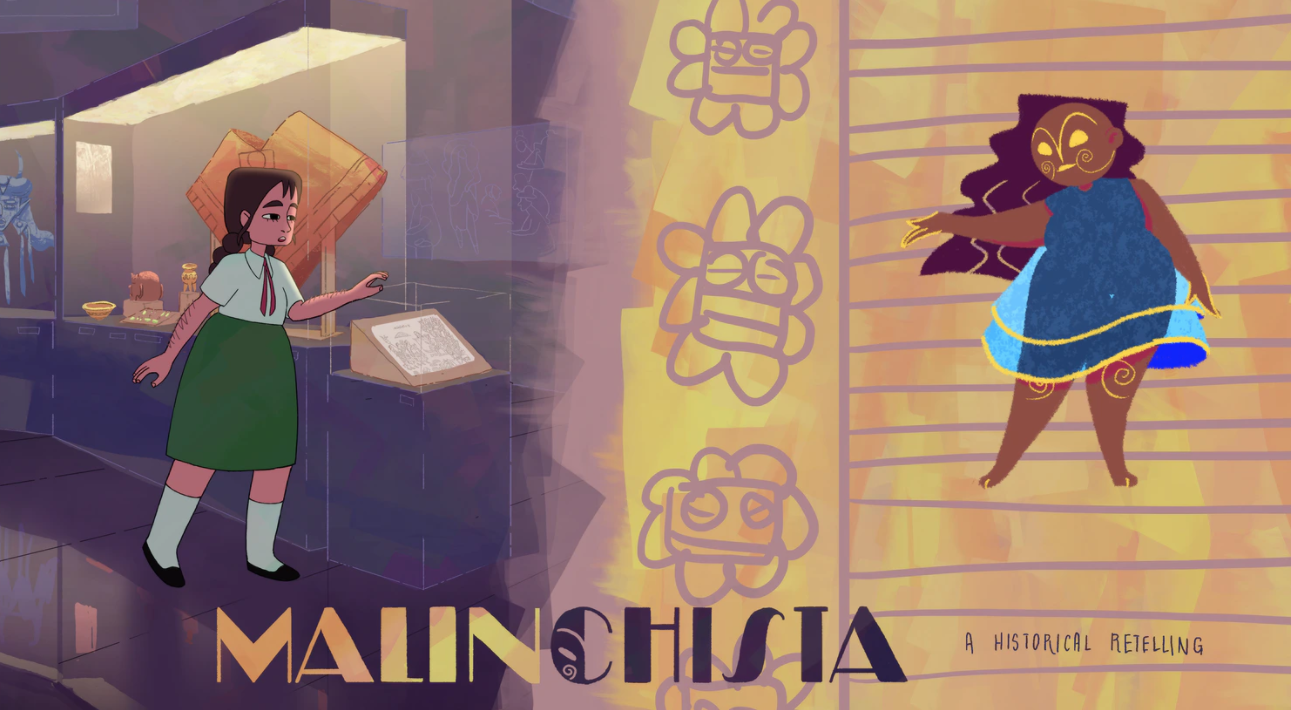 Malinchista is making its introduction in this year’s LALIFF. The Los Angeles Latino International Film Festival is celebrating its 20th anniversary. Latino filmmakers from all over have come together to reveal aspects of the Hispanic and Latino perspectives. What better way to celebrate than with a lovely short that demonstrates just how diverse and multicultural the Latino experiences and backgrounds are?

Malinchista is directed by the brilliant and creative Flora Rees-Arredondo. This short film is a kind-hearted retelling and reimagining of an Aztec term and a woman’s origins. The story condenses a long history of betrayal and deception into six minutes. Malinchista illustrates how the reclaiming of the history of the woman born as Malinalli and the term itself can both lead to empowering Latinas.

The animated short begins with Mari (Sarai Cibrian) and her class, who are on a field trip to the Museo de Anthoropologia (Museum of Anthropology). When Mari, a mixed Mexican high school girl, hears strange sounds coming from one of the rooms in the museum, she goes and checks. There, she notices a fellow classmate Emilio (Eric Rosales), who is of Spaniard descent, being racially bullied and tormented by Antonia (Diego Cruz) and Xiomara (Jazlyn Lopez). They insist that his pronunciation is incorrect and that he should correct it. As soon as the other students notice her, they quickly turn to her and call her a malinchista. Unable to understand the meaning behind the term, she runs away in fear. Through her interactions in the museum and the Curator (Caroline Salinas), she soon discovers the meaning behind the term and becomes empowered by it.

What is so surprising about this animated short is while so many other filmmakers have shifted to a 3-D model, Malinchista is a 2-D production and is just as impactful. Within every frame a breathtaking attention to detail is carefully considered even to the smallest artifact. This short film spares no expense when telling the history of the term malinchista. The term is a pejorative that expresses disdain for those who are attracted to foreign values instead of their native ones. Malinalli, where the term malinchista originated from, is used as a euphemism for a race traitor. After Mari learns the story of La Malinche, she is able to find her voice and help her classmate stop being bullied.

The question of what it means to be Latino or Hispanic has been largely debated for a long time, often by members in their own communities, as understood from this op-ed ODAAT. Cultural figures like Lin-Manuel Miranda have spoken out on this issue in an IndieWire article, “What you run up against are the limits of defining 32 different f***ing countries with one word…Literally, no word is going to make everyone happy.” These phrases hold a lot of truth. While some might prefer the term Latino, others might prefer Hispanic, and even more specific terms like Chicano or Borinquen might be more welcome to certain people. Some terms are placed upon them, while other terms like Latiné or Latinx are created by the very same communities to help define them. In no uncertain terms, each individual must define for themselves what term best fits their lived experience. What Malinchista does is just this. It attempts to reclaim and redefine a term for a more positive view on the individual.

The film exemplifies the connection between the word and the historical figure. It reimages Malinalli history in a way that shows the term and the woman are more than just a word or a novelty, but instead have deep meaning. The term and the woman’s body have been used as a weapon towards her own people. However, this short illuminates the capabilities of using Malinalli’s body not as a weapon but as a form of protection. In Malinchista, Malinalli became a linguist who used her tongue as a weapon. Many natives blamed her for their plight, all while forgetting that she was the first to be used and betrayed. Anyone who betrays their people is known as a malinchista.

Malinalli refused to allow herself to be a victim of her people or the conquistadors (Hernán Cortés). She used her tongue as her weapon. Her words brought death, but also brought life. This life gave birth to a mestizo son and a new world was born. The term can be used to denigrate those in the Latin/Hispanic community, or it can be used to empower the Latino community to see it as joining different cultures together.

For anyone who is struggling with their identity, this short film unpacks the idea of being able to take a term and redefine it for one’s own use. Seeing how powerful and impactful this short was, it is no wonder why it was shown in the Los Angeles Latino International Film Festival. This stunning creative and imaginative work is nothing short of a good time.