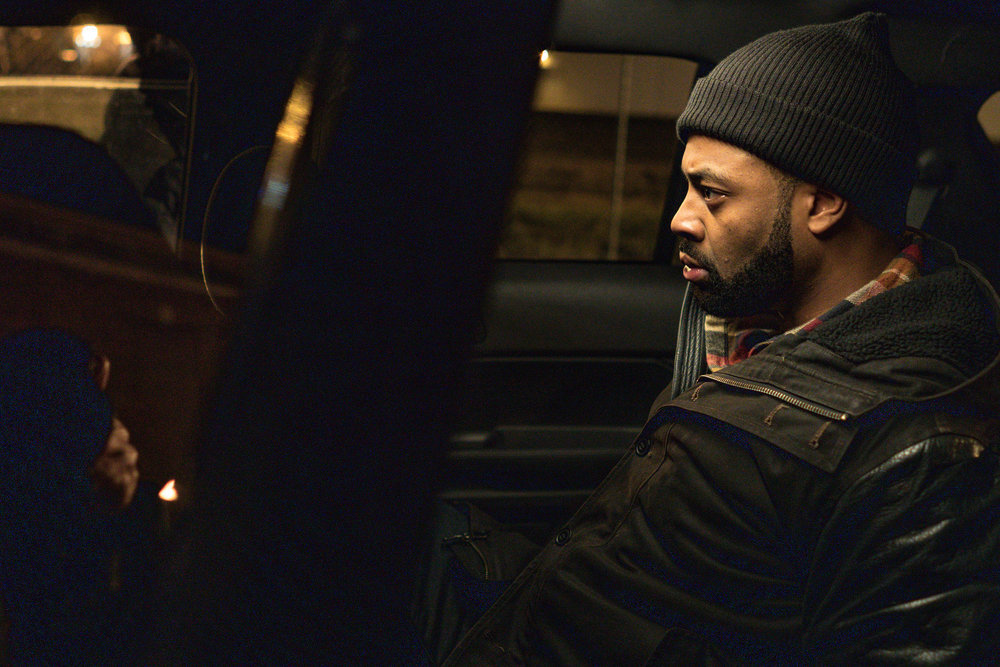 Hopefully, by now, you’ve watched the new episode of Chicago P.D. titled, “Night in Chicago” that aired Feb. 6 on NBC. The episode centered around officer Kevin Atwater, played by actor LaRoyce Hawkins in what he called, “one of the most powerful and history-making storylines in the era of police dramas.” The episode was directed and executive produced by veteran actor, Eriq La Salle (E.R.), and written by Ike Smith and Rick Eid.

“Night in Chicago” opens with Atwater working undercover to bring down a criminal enterprise that pushes heroin into Chicago neighborhoods for profit. The undercover operation happens after crooked Alderman Ray Price, played by veteran actor Wendell Pierce (Suits,The Wire, Treme) tells Sgt. Hank Voight, played by Jason Beghe, to take down the enterprise’s leader, Phil Gamble and his assistant, Daryl. Atwater’s goal is to win Daryl’s trust to connect with Gamble. Once Atwater gains Daryl’s trust, things are set to go as planned.

But, this is Chicago P.D. Nothing goes the way as it should.

During a night drive to a supply pick-up from a dealer friend of Atwater’s — who is really Det. Antonio Dawson undercover — Daryl and Atwater are pulled over by two white Chicago police officers. What happens next is a dramatic turning point for Atwater. The stop becomes a Driving While Black incident with one of the officers showing his racist personality and being physical with Atwater. This is difficult for Atwater who has to keep his cover hidden. It escalates as Daryl becomes increasingly agitated and it ends with Daryl gunned down by the racist officer. Atwater is then blamed for Daryl’s death but has to finish his job.

The episode is a turning point for Hawkins, who delivers a performance that will have fans talking for the remainder of season six and beyond. BGN talks to Hawkins, a Harvey, IL native about preparing for the episode, symbolic moments, and working with acting royalty.

I watched the episode before it aired.

What did you think?

It was amazing and, intense. I commend you for your performance as Officer Kevin Atwater. You really did it with this episode. How did you feel when you got your copy of the script and read it?

I knew that the storyline was big and it was an important episode. And, Ike Smith, who is also from Chicago, wrote the script and this was his first script for Chicago PD, so it was a monumental moment for him. And we have a familiarity with the city. Plus Eriq La Salle directed the episode, so yeah this was going to be an incredible story. This is some of our best work. This was going to be something that the fans of the show would not forget.

There are a lot of symbolism in this episode. Driving While Black, Black Lives Matter, a racist cop vs good cop and, Trayvon Martin. I mention the latter because towards the end of Night In Chicago, Atwater meets with members of Civilian Office of Police Accountability (COPA) and one member asked about the night in question, and says the date…February 5. Martin’s birthday was Feb. 5 and he would’ve turned 24 this year. Then, after confronting the officer who shot and killed Daryl, Atwater turns and walks away. But not before covering his head with the hood of his sweatshirt.

Thank you for seeing the connection. I wasn’t supposed to wear that black hoodie in this episode. I asked about it in wardrobe. I wore it was earlier this season in episode eight of this season, titled, “Black and Blue.” Kevin threw a gun in the river to prevent a kid from going to prison for protecting his aunt by killing someone. Kevin goes through a lot of conflict as a person and a police officer. He loves his job and his colleagues and his community. But he has had to make some decisions that will affect him. But Kevin is going to be different from here on out.

How did you mentally prepare for this episode?

With each story, I go through a spiritual process or I go on a fast. One thing I will tell you…I played the Sandra Bland documentary. I had the documentary on loop, and you saw every expression on my face was about Bland. Every emotion in my face, from the time Kevin and Daryl are stopped by the police, to the moment Kevin has a cop’s gun pressed against his head, I thought of Sandra Bland. Kevin represented what we as Blacks go through in our communities. And the fans will see that. And Eriq as a director made me dig deep within myself to do this episode. In fact, ‘dig deeper’ was a common phrase that Eriq repeated during that night shoot.

Would you like to direct a future episode of Chicago P.D.?

It’s tough not being around Eriq LaSalle as a young brother, and, not feel like you can direct. But not right now. I do have directing dreams because of Eriq, but, I’m not sure that Chicago P.D. is a vibe that I am ready for. But I am inspired to direct. But, Eriq is a beast. A man, who can tackle these kinds of shows. Maybe by the time I am older —because he did his spin on E.R.— maybe 20 years from now, after I’ve done my spin with Chicago P.D., I will direct some shows. Some cop shows.

You had a great scene with Wendell Pierce. What is it like to work with him?

Wendell is like talking to one of my homies from back home. Wendell is extremely gracious and he is a real guy but also a force to be able to portray and represent people. That’s what we as actors love to do. Wendell comes to Chicago P.D. and, puts the pedal to the metal every time. I’ve seen him do the research and talk to people. He embodied the characters he play. I have a funny story. My dad actually credits himself for being the origin of Alderman Ray Price, who is played by Wendell. Once upon a time, about two seasons ago, my pops was featured in a card game that I had with a bunch of dope actors and my dad was an extra. He played an alderman, and, my dad is amazing. He didn’t have any lines, but he said he was going to play a crooked alderman. “I’m gonna play crooked and give that crooked stare!”

Yeah! And the next thing my dad knows, Wendell Pierce comes on and plays Ray Price. A crooked alderman, just like the way my dad said he was playing back then! And every time Wendell comes to the show, I get tickled and think about my dad. You can’t convince him that he did not give Chicago P.D. the idea of having a crooked alderman!