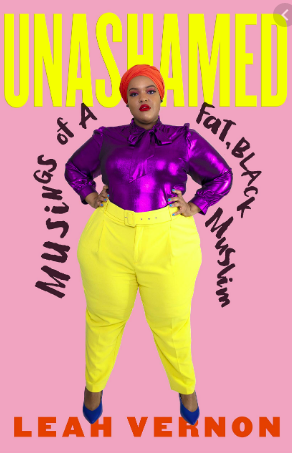 Leah Vernon is everything you wouldn’t expect of a Muslim or model.

As she whips standards of the fashion world into new shapes, she declares her faith not only by wearing a hijab but a f-cking gorgeous one at that.

She is the author of Beauty and the Muse, a rapidly-growing fashion and body-positive blog, owns her own makeup and fashion brand, and offers wisdom and counseling for the next girl making it as a public speaker.

Her latest book, Unashamed: Musings of a Fat, Black Muslim is like a how-to of her career path and character. The narrowing standards of societal beauty and media-fueled twisting of her Islamic faith is what pushed her to be so boldly creative.

And of course, unashamed.

She begins with the woes of growing up in a household where her faith was born but also where the source of her pains and insecurities lie. Her father was not always in the picture, but when he was, Vernon was tormented by snide comments and outright insults to her weight and faith.

All forms of shaming—whether it be fat-shaming, body-shaming or faith-shaming—is a toxin that needs to go. It’s only worse to be shamed by your own blood. But Vernon was flanked by both family and friends.

Yet she kept at it. Unashamed.

“Deciding, really deciding, to unapologetically wear my hijab for me has been the most freeing and rebellious and feminist thing I could possibly do,” she writes. “I didn’t wear my hijab for others, so they could think that I was a good, practicing Muslim. Nah. I did it because it was me, my crown, my shield. It told people that I was strong in my belief, whether I said it or not.”

She wasn’t always a hero to herself. It took trial and error, years of battling eating disorders, and having to leave a toxic marriage for her to get where she is. On top of that, haters peered around every corner for their chance to shame and belittle.

Body positivity was birthed from the battle to overcome shaming. We see many victims of this cruelty accepting and embracing the insults thrown at them and turning them into silver linings.

ALSO READ
Review: 'Scenes from My Life' by the Late Michael K. Williams

“Fat” is now spelled with a “ph” and means “full-figured” and/or “pretty hot and thick.” To be a “slut” now means to be a woman who embraces her sexuality and wears it proudly.

To wear a hijab amid an Islamophobic society is telling of personal security and respect. To walk proudly in clothes found exclusively on size 2-4 models as a size 16 is a bold statement. Vernon does it overboard with bold lipsticks, bright colors, and those gorgeous massive hats.

A Black, plus size, and Muslim model is rare, but Vernon is changing that.

In 2016 while doing her thing, editor-in-chief of Muslimgirl.com awarded Vernon “Baddie of the Month.” She was awarded the 2017 Gilda Award as the best artist to express “exceptional potential through creative risk-taking and pushing the boundaries of their chosen art form.”

Now she’s the face of Cosmopolitan, BLAC Mag, and many other fashion blogs and magazines. She’s done countless work with large companies such as Addition ELLE, Adidas Originals, and Go Red for Women, and is now the star of #LeahVDaily, a social and fashion movement on Instagram.

Her Instagram has over 40,000 followers (and counting), and the posts of her creativity keep coming.

“I’ve been there … I’m not a trust fund baby. Not a thin woman. Not a privileged person. I’ve never had financial support from family. But, I’m here,” she wrote recently on her Instagram.

The world could use a bit of this creative confidence and unashamed-ness Vernon exhibits. We’ve had enough of the negative energy, the shaming for being alive — and the younger generations are having none of it. It’s time women and girls pronounce who they are and be just that, regardless of their background, career path, race, or religion.

Grab your copy of Unashamed: Musings of a Fat, Black Muslim wherever copies are sold.