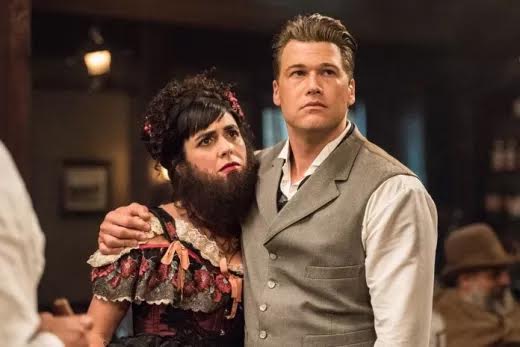 at the Playing Games at Circus

Episode two of the third season of Legends of Tomorrow brought back our Amaya and added a little fun at the circus for us. I am loving the electricity between Nate and Amaya, but that’s not all that happened in the episode. Let’s dive in.

AMAYA AND NATE Are Back?! Or… not.

This first scene just punched me in my little heart. I ship Amaya and Nate so much and to see them living together and being all romantic was such a surprise after last week. Then, while Nate is out for a food run, Amaya is jolted back to the realities of time and responsibility. Her granddaughter Mari is kicking ass and taking names in 2017 Detroit. She is making a difference and saving people, and the only way she will exist is if Amaya goes back to Zambesi in the 1940s. So, when Nate comes back, Amaya is gone.

That’s where we rejoin the team on the Waverider. Poor Nate.

I’m not mad at Legends of Tomorrow for the flashback. It was a little bit of closure for me…I mean Nate. Yeah, closure for Nate.

The team finds time anachronisms have multiplied since their last ride on the ship. There are so many that they actually bicker over where to go. The Professor lets everybody know just how much he hates the Titanic. (Haha) They end up in 1870 with PT Barnum, played by the suave Billy Zane (who is totes why the Professor hates the Titanic), when the man was ramping up his acts. It seems that Barnum has a major draw that he is itching to unveil. The Legends must intercept it before that happens. We quickly find out that Barnum has a sabertooth tiger, and Ray doesn’t exactly know how to use the new shrink tech he built. Now the team must tame a giant sabertooth tiger, a job for the animal expert Amaya.

Sara goes back to get Amaya on the team. The heroine is deep into her culture, and hellbent on protecting her people and Mari’s existence. A little girl is in the scene. Could that be Amaya’s kid?” This show had me pausing the video to see if this girl got the loose curl of a biracial baby. Y’all know what I was thinking, ‘cause you were thinking it too! Turns out, she was just a kid from the village. Sara convinces Amaya to come for just one mission and then it’s back to Zambesi. It does seem like the Zambesi superhero is hiding something. She never lets on.

The reunion between Nate and Amaya is cold, but you can tell that something is still there. Everyone else is happy to see her. They get a strategy together to catch the sabertooth and the team goes back out to 1870. Jax and Nate throwing back whiskeys at the bar as Nate whines about Amaya was funny, but it seemed that the guys are having fun while the girls were doing all the work. Nate ends up in a fight with a local over the bearded lady (the local man insulted her and Nate came to the woman’s defense). Nate turns to steel, getting Barnum’s attention. Nate spills about the powers of his teammates and soon they are invited back to the circus.

Meanwhile, Amaya and Sara shrink the sabertooth into a cute kitty and take it back to the Waverider just as PT Barnum has Nate punched out and Jax and the Professor caged. He is losing money and needs a new act. Barnum wants the rest of the team.

Time and the Red Tape

The rest of the mission becomes bogged down in saving the guys and thwarting the Time Bureau’s operatives who came to spy on the Legends. Sara traps George, a pencil pusher from the Time Bureau that we met the last episode. Of course, he gets captured and Sara places herself in charge of him as Amaya and Nate go back to get the guys. Unfortunately, they are quickly kidnapped. It’s a good thing though. They get to talk. Amaya tells Nate why she left. The two of them get closure. It’s a sad moment, but one we all needed.

Sara ends up making a call to the manager, as she uses George to bring out the head of the Time Bureau in Central City. The woman comes to the Waverider and fights Sara for quite some time. They end up getting tired and then sharing a drink and admiring one another’s skills. Then, Ray’s serum turns off and the sabertooth enlarges. Management then lets it drop that something bigger and badder is coming.

Barnum turns out to be so evil! He has Amaya caged and is trying to provoke Nate into turning to steel by shooting at the man! He continues shooting until Nate drops the steel. It kinda feels like Nate is trying to get hurt! Meanwhile, Jax and Ray are tied up together as conjoined twins. The professor dresses up as a clown to get close enough to Jax to flame out, and Rory confronts his fear of clowns — head on. Barnum succeeds in making someone’s powers come out — it’s Amaya. She is out of control and Nate is the only one who can bring her back. You can feel that old chemistry between them. They still love each other. There is still hope for the couple.

When he says in a low voice, “Come back to me,” and Amaya looks directly at him as her eyes turn back to normal… I get chills thinking about again.

Back on the ship, the Legends regroup and Amaya explains her problem. The animals are taking over every time she taps into the totem. She is losing control and is scared of harming her people. Well, they acknowledge that everyone in Legends of Tomorrow is damaged somehow, and convince Amaya to stay on for a while. Does this mean there is hope for a renewed romance?

Sara tells the team about the new evil and they all have a good laugh. As this is happening, a figure in a dark cape creates a figure from the water. The water turns solid and then takes a human form. It’s a new villain…and she BLACKITY-BLACK!  Kudos to Legends of Tomorrow for adding some more color to the show.

In the meantime, if anyone has info on the person in the cape or the black lady from the water, please share with the rest of us!